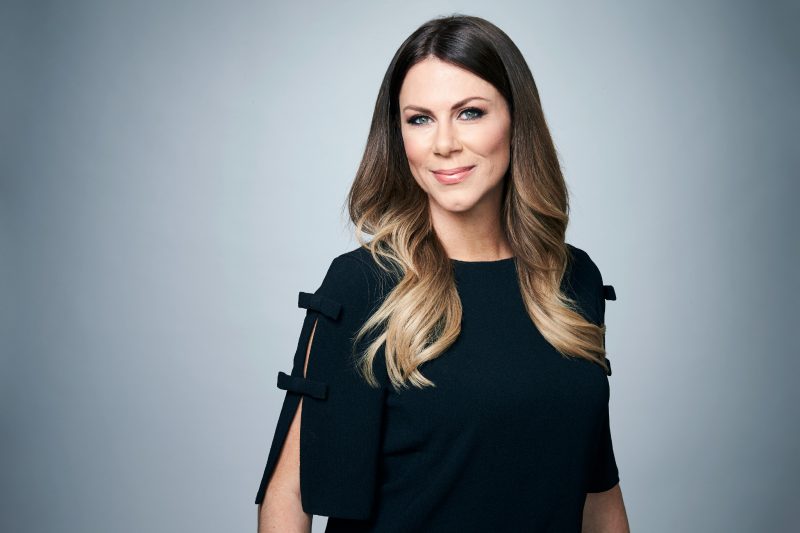 It was just after 11 a.m. on a warmer-than-usual fall day in Washington D.C. when Kate Bennett, a White House reporter for CNN, walked into a café neighboring the network’s Capitol Hill headquarters. Dressed in a simple, elegant camel coat over black pants and a blouse, Bennett had just finished submitting her daily Cover/Line newsletter, recapping her trip just the day before with FLOTUS Melania Trump. That’s just an average day for Bennett, a native Washingtonian, who was brought on to CNN to cover FLOTUS, the First Family, and the East Wing. In a time when the political climate is more unpredictable, ever-changing, and talked about than ever, Bennett sheds light on a different angle to the coverage that is so consumed by society today.

Kate, how does your coverage of this administration differ from past presidencies?
I was a White House reporter for the last year and a half of the Obama Administration for IJR. Hunter Schwarz and I wrote a newsletter called the Political Edit, which was the baby infancy of what is now Cover/Line by CNN. Before that I was at Politico writing a gossip column, and previously was at Washingtonian as a fashion editor. This is my first job where I’m primarily focused on the First Lady, the First Family, the East Wing and the social-political mash-up that can sometimes happen.

What’s it like?
It’s fascinating! There’s a real mystery with the First Lady. I sometimes call her the unicorn, because people are fixated by her. She doesn’t emote a lot—she’s quiet—so there’s a lot of differences (not saying good or bad) from what we’re used to. But to come from Michelle Obama to a very quiet, reserved First Lady who you can’t really read…chronicling that has been pretty fun.

What triggered you to make that initial switch from being a fashion editor to covering politics?
It’s funny, I didn’t really decide. Someone decided for me. They saw me in a role covering the White House with a different eye. My background is politics—my first job was on Hardball with Chris Matthews 20 years ago, and I grew up in D.C. My parents ran Roll Call newspaper, so having politics in my veins in journalism is really paramount. Lifestyle journalism came naturally. The two might seem different. For me, it’s a natural marriage.

What does a typical day look like for you?
Depending on the news of the day, I’m either writing, I’m on the air, or I’m at the White House. In the mornings, I’m definitely Cover/Line focused. I get that out the door so that people have it around lunchtime. After that it just depends, but it’s always different In the evenings, if I’m not on the air, I still like to keep up socially around Washington. Covering Washington isn’t just a bubble of sources in the White House and on the Hill. My sources are sometimes wives of people at parties or a great salon who has a chatty hairdresser. The observing of social culture here is also sometimes just as telling and interesting for news as having a great source here in the press office at the White House. 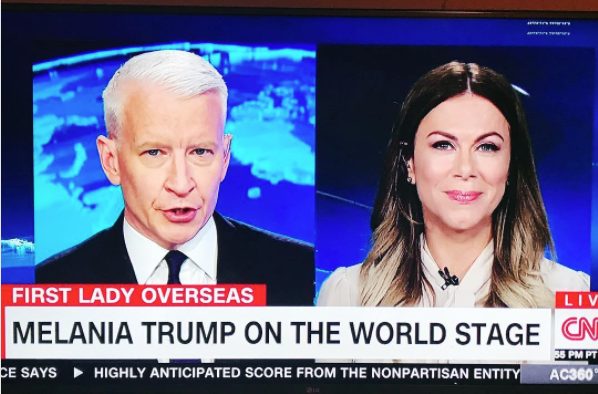 What have you learned about Melania?
From what I’ve observed, she really connects well and seems to come alive in a joyful way when she’s around kids. I think we saw that on her trip to Europe this Spring when she visited sick children in hospitals and went to schools. It was the most we’ve seen from and heard from her. I’ve also learned that she has a side to her that’s very mom focused, not unlike Michelle Obama. Her primary concern is her son and being a good mom. She’s figuring out a way to make that work for her platform. Recently she said herself that being First Lady is nothing she ever thought she would be. She made a joke when she was donating her inauguration dress to the Smithsonian saying, “I don’t know if you guys know this, but, my husband was never in politics but he was elected President. The last thing on my mind was what am I going to wear to the inaugural ball.”

What’s the most interesting trip you’ve gone on with her?
I had a great day with her with the Invictus Games in Toronto. The Prince Harry, Justin Trudeau, and Melania mashup is goals.

What was the deal with Prince Harry’s hand in those photos?
You had to really be there, and I was so I’ll tell you! He was reaching in to unbutton his coat to sit down, but the cameras kept clicking so he still had his hand in there in that weird way. He was pausing. He wasn’t throwing a secret gang sign. They got held up in the pictures. It was an amazing day, it was her first international solo trip. It was very moving to watch her at the Invictus Games as the Wounded Warriors and the USA team came out. We were all given these glow in the dark things that pulsed to the music. Although the press was seated quite far from her, we could see her and I could tell that she was doing the hand motions or when she was doing a standing ovation. It was very interesting to watch her. People always say “Oh you miss Michelle.” They’re not that dissimilar in their enthusiasm for the job but their skill sets are obviously different because they have different strengths and weaknesses. I think people categorize Melania as a whole. They say she doesn’t want to be here, she doesn’t deign to touch the White House. I think those people would be surprised by just how opposite [of that] she is.

How do you keep up with her outfits?
Because I’m a fashion aficionado, I have a weird savant-ism that I can’t really do with anything else. I’ll notice a color or a cut and then I can say, Is that a Roland Mouret? Is that a Valentino? I’ll do a little detective work. It’s like a puzzle. Male journalists tweet a lot about sports, but for me, it’s fashion. Sometimes people are like, “Who cares?” But fashion is a multi-billion dollar industry and this is an icon of our government. She’s someone who is going to be entering our history books, and her [inaugural] dress is already in the Smithsonian. I care.

What do you think about Sarah Huckabee’s style?
She’s a woman who grew up in the South, and I think her style is very reflective of what she knows in her environment. I think she dresses fine. She has a feminine edge, lots of ruffles and curls. It’s that sort of Washington meets South Carolina vibe.

If you had to give her a tip….
I would encourage her to be a little bit more tailored. Maybe try a suit here and there. Try a Black Halo dress—I know everyone has one in their closet. She could step it up to another designer label, but I respect that there’s probably a price cap on some of her stuff. I think she’s doing it fine.

How do you unwind with the intensity of the political climate?
It’s interesting. Running a magazine was pretty intense, from the deadlines to overseeing everything from captions to the staff. I find this job to be intense, but I’m so enjoying it that I don’t feel like I need to do the major unwinding like my colleagues like Jim Acosta, Jeff Zeleny, or Sara Murray, who are really faced with the front lines of breaking news. I have a kid and great friends. I put on a front that I’m cool but I’m usually in bed watching House Hunters by 10 p.m.

Why are you private on Instagram?
Only because of my daughter. I like to put things up sometimes with her. I go back and forth on that. My Twitter’s public. My Facebook and my Instagram are private. But I’m pretty liberal with who I let follow me, although I do like to give a scan before.

What never gets old about your job?
This sounds goofy, but I really dig being at CNN, which I grew up watching, and seeing Wolf Blitzer in the elevator. He likes to play “Who Are You Wearing” with me. He’ll be like “Bennett, who are you wearing?” [Laughs] and I throw it back at him. He’ll be like, “I’m wearing an Armani suit.” I’m in the front row to history and it’s a fascinating time in American politics. I’m just glad I’m a part of it in some small way. 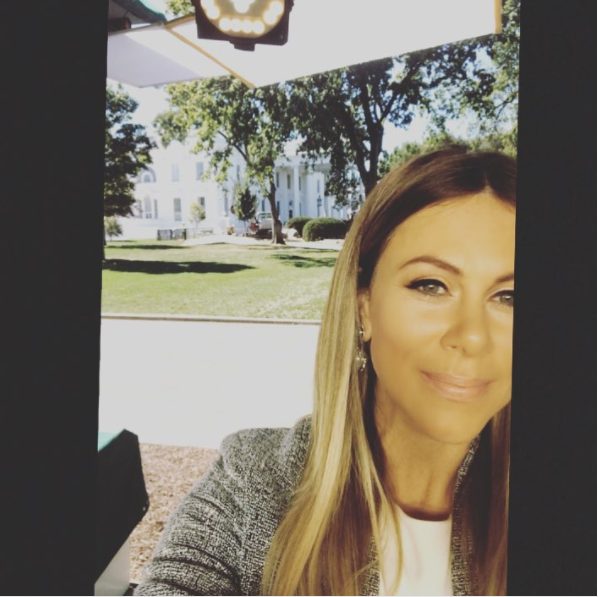 Not really into the normalization of Melania at all. She is not a Unicorn – she is a fool.

Most who criticize Melania are jealous of her style, and grace.
I am sorry that she is followed by a leftist.

Ms Dix I think the reporter did a very honest and fair job of the first lady. What difference does it make who covers as long as they are trueful. God help us today.

̛ think Melina Trump has been an excellent first lady for A merica lots of quiet class not a BIG mouth , I like that she lets her husband be the center

I don’t think we have a right to criticize her or any first lady. They are not elected to the job. It is not a salaried position. They are private citizens serving the citizens without being on the payroll. So they are actually doing the country a favor by representing us favorably. And I think she is a great mother.

I agree that there are so many jealous people when it comes to Melania. My mother was a fashion designer. She lived to age 104. She would look a Michelle Obama and say No class..

You can tell more about someone by what they say about others, than what others say about them. She’s the first Lady, respect our country, and take it for what it’s worth; There are no mistakes.

Kate Bennett, Your sickening spin on the El Paso
Baby with Melania Trump has to be a new
Low in reporting. We need laws against
Intentional, flat out slanders that people
Like you are regularly willing to spit out
for a few bucks. Take a good look in the mirror