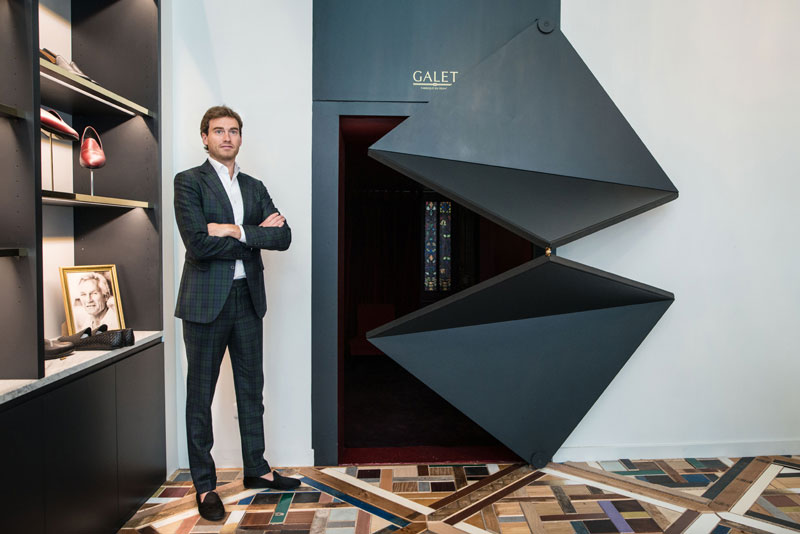 Galet, a new footwear brand known for its casually luxurious men’s slipper shoes, has opened its first-ever flagship store in Paris. The company was founded by former financier, Jonathan Horemans and former lawyer, Javier Goggins. The duo was in search of a shoe below the price point of their Tod’s and Stubbs & Woottons—a shoe that could be well-traveled and well-worn without worrying about destroying the sole. Each pair of Galet’s slippers comes with rubber soles and starts at around $200. But it’s not just the shoes you’ll be wanting to see. The store is a work of art in and of itself. Horemans filled us in on Galet’s new maison at 8, rue de l’Odeon in Paris.

What is the philosophy behind your shoe brand?
The great thing about our shoes is they’re just super comfortable, and all the canvas ones are machine-washable. So you take out the rubber insole. And for men, especially, we like practical things. Men don’t want to wear their Tom’s on the weekend because if they get sand or water on them, they get destroyed. We really wanted a shoe that you can wear every day. We want people to be able to wear a comfortable, versatile shoe and look good at the same time.

When did you found it?
A year ago. Last summer was when we really got our first collection ready.

Where are the shoes made?
Three hours west of Paris, toward the coast. That area was a very large shoemaking area in France. It kind of diminished over the last three decades, so we’ve been fortunate enough to find the right people that would want to work with us, who have the craftsmanship and the knowledge. I think they want to work with us because we bring in a new energy, a new spin. They’ve been making leather shoes for generations; it’s kind of always the same, Brogue, Oxford. We come with these materials, and the question always is, are you sure those are men’s shoes? And we’re like, ‘Yes, we are!’ And they kind of like the fact that our leathers can be a bit brighter, the cowhides can be a bit louder.

What’s the price point?
It starts at 175 euros [$200 at current exchange rates], so something like this very basic canvas loafer up to 295 euros [$336] depending on the material. But the salon rouge is for limited-edition shoes and where people can do customization and bespoke. Those will range typically from 325 euros to about 850 euros [$968], depending on what material you get.

At 850 euros, do the options for the soles change?
All of our shoes are always rubber-soled, because we want people to understand that rubber does not mean it’s cheap. Our rubber actually is more expensive than the leather that we typically have used for the soles. Once guys wear it, they find it very comfortable, it’s low maintenance, and you can just use it more often. But the rubber soles we can do in different colors, too, so you can basically customize what color you want.

Would you ever do women’s shoes?
We’re a men’s brand, but that being said we go down to a 38. So it’s a his or her boyfriend shoe, very unisex-shaped in that regard. We’re going to be going down to a 37, eventually.

What were you doing before this?
I worked in finance. I lived in Asia for four and a half years, in Hong Kong and Singapore. And then I got into shoes, from pure need. I was doing a lot of weekend trips and I would destroy my casual loafers—because of monsoon rain and beaches. The only canvas shoe I could get was from Tom’s, and I didn’t want to wear flip-flops. I still wanted to have a certain kind of look. At the time, I couldn’t find anything that suited my needs.

Was your business partner, Javier also in finance?
He was a lawyer.

Tell us about the geometric door that leads to your bespoke salon.
It’s by an Austrian artist named Klemens Torggler. He became obsessed with this concept of creating a different door. He put it on YouTube and it just exploded, and now he’s getting orders from all over the world. This is the first one in France. Behind the door here is our salon rouge. It’s kind of more of a lounge area where clients can customize their shoes. You will be able to pick the hides and buckles and have fun with putting a shoe together.

Who did your incredible wood floors?
Henry Krokatsis. He specializes in side paneling floors with the philosophy of using reclaimed wood from old manor homes or hotels, or floors that have a history and have been destroyed. He reuses them to create something of value. He also does the same thing with windows. He’s only done one other commercial project, which was with Issey Miyake, and it wasn’t a full floor.

How did you find him?
Through a friend of mine, who was an art dealer. She put us in touch and she greased the wheels, because he’s not very interested in commercial things like this. But we really hit it off and I think we could relate on a lot of philosophies, and he liked what we were doing with our shoes. Also, he likes to take things that seem classic and add different interpretations to them. So with our shoes, it’s one of the most classic silhouettes out there, the slipper silhouette. It has this very kind of urban aristocratic stuffiness about it. We’ve reinterpreted it by putting a rubber sole on it, and really play with different materials. We’ve taken something that’s very classic and made it much more modern and versatile, and also more accessible.