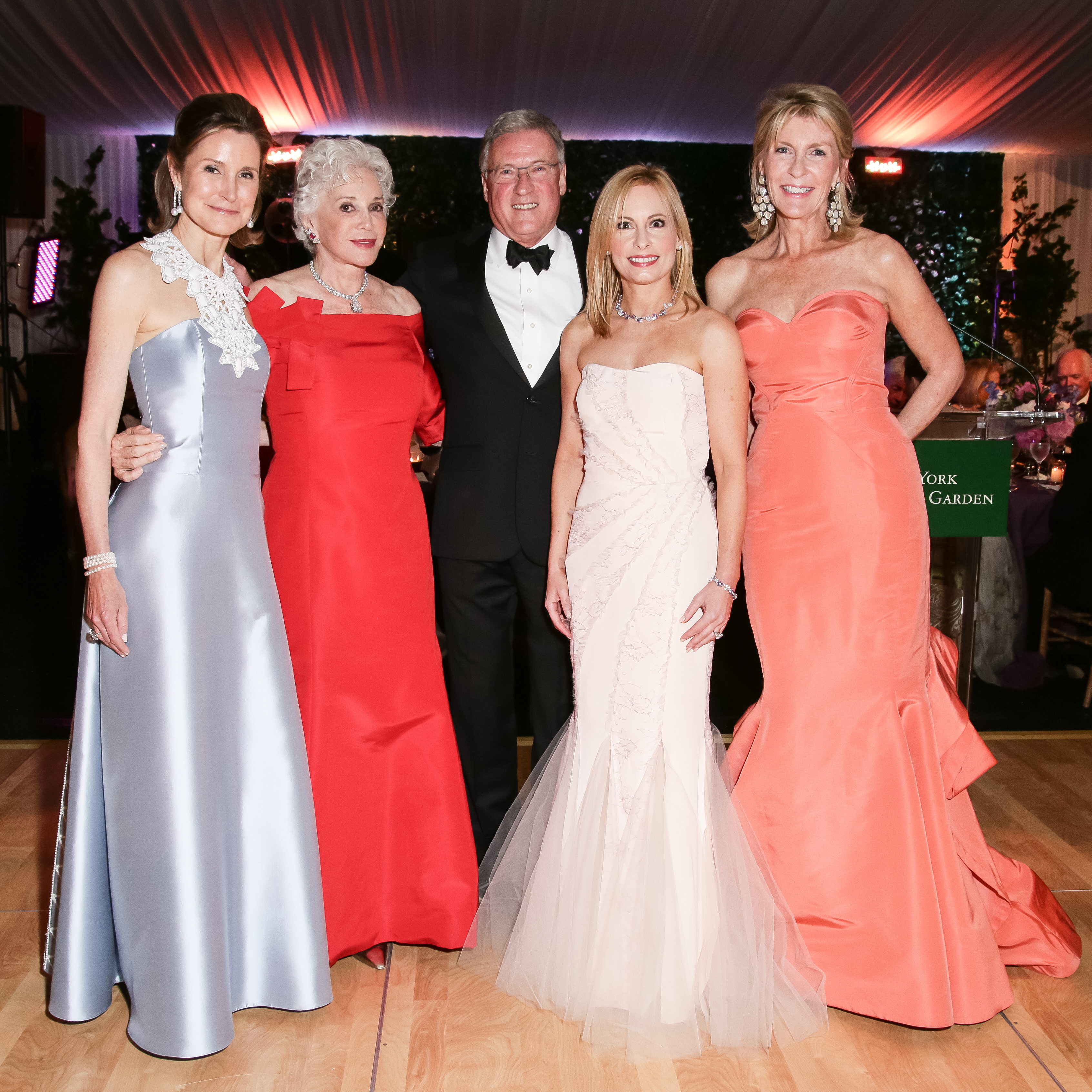 Last eve, the New York Botanical Garden brought the party north (to the Bronx, specifically) with its annual Conservatory Ball. The always-opulent event brought out the likes of Sigourney Weaver, former mayor Rudy Giuliani, Fe Fendi, Gillian Miniter, Alexandra Lebenthal, and Paper‘s Mickey Boardman. As for the theme? “Groundbreakers: Great American Gardens in the Early 20th Century and the Extraordinary Women Who Designed Them,” which included a horticultural exhibit of “Mrs. Rockefeller’s Garden” in the conservatory. This year’s festivities honored Gregory Long’s 25th anniversary as director of the New York Botanical Garden. Surrounded by such lush foliage, we wondered how many green thumbs were on the premises. “I grew up gardening!”  Di Mondo told us. “It’s so grounding and relaxing. My parents always had roses and beautiful plants like birds of paradise. I find it so peaceful. An excited energy was palpable, and although the day started out soggy and gloomy, the crowd stayed pleasantly warm and dry. In addition to the usual step-and-repeat set up greeting guests, there were six trumpeters to welcome the crowds in. Cocktails in the garden preceded a sit-down dinner coupled with dancing and live music.

“The 25 years under Gregory’s leadership, this garden has seen amazing revitalization and growth,” said Maureen Chilton, five-year incumbent chairman of the board for the New York Botanical Garden, in a speech to the crowd just before dinner was served. “Gregory is a man who brings together a dynamic and very dedicated staff, a hardworking board and all of these amazing supportive patrons like yourselves. He draws them to the goal of the mission of the New York Botanical Garden…It is with his focus and leadership that the garden is thriving.” Indeed: the national historic landmark’s breathtaking landscape and vibrant floral designs instantly transported us from the city’s concrete jungle to a hidden oasis in paradise, at least for the night.

Of course, no ball is complete without gorgeous gowns, and gowns were in no short supply last night, mainly in solid pastels or floral prints. But the classic LBD (or shall we say LBG, little black gown) made quite a few appearances as well. Sparkling jewels could be spotted everywhere, but a definite favorite was Miniter’s stunning flower motif necklace, bracelet and ring set by Van Cleef & Arpels, in a floral motif that was oh so appropriate for the evening’s theme. As for Miniter’s taste in real blooms? “My absolute favorite flowers are peonies and lilacs, especially together. For June, they’re perfect,” Miniter said. “We don’t have lilacs [at the Botanical Gardens] because it’s not lilac season yet, but I love the purples and the pinks.”

Over apps like bacon-topped sliders and buttered radishes, guests mingled in the garden and conversed with flutes of champagne in hand, catching up with one another, and, in some case, taking part in some curious bauble talk. “She tried to get me to take one of her ankle bracelets and wear it as a necklace and I said, ‘Ha! I am not going to do that!’” a guest exclaimed to a group of friends while sipping white wine.

Seating for dinner began at 8:30 p.m. as the band played Frank Sinatra’s “Somewhere Beyond the Sea”. The music of the evening started out with oldies but goodies; as guests migrated toward the dance floor, the jams got more upbeat, including Rihanna’s “We Found Love,” the Black Eyed Peas’, “I Got a Feeling” and Beyoncé’s “Crazy in Love.” But while the evening was full of dancing, drinks, and delectable food (with entrées like spring chicken with Cantharellus, aka chanterelle mushrooms), the event’s purpose wasn’t forgotten. Due to the 25th anniversary of Gregory Long’s leadership, a special anniversary fund of $25 million had been assembled by the Board to mark the occasion. However, the fund’s goal was exceeded by $3 million, bringing the grand total of raised money to $28 million. All proceeds raised support the core mission of the Garden, including internationally acclaimed programs in children’s education and plant research and conservation. The evening was a grand success on all levels, non? Until next year!
KATHLEEN HARPER