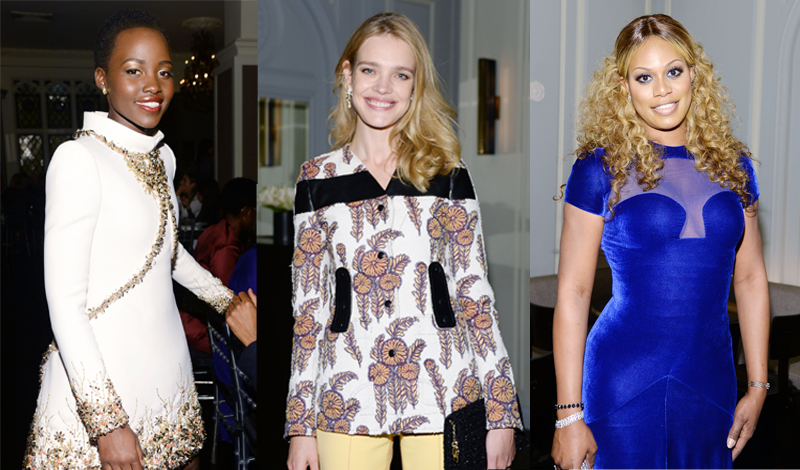 Hope you brought some tissues to Glamour‘s 24th annual Women Of The Year awards (the WOTYs, if you will) last eve: The Condé glossy packed Carnegie Hall yet again with an epic roster of standout lasses.  Things kicked off with a song by breathy sister act Haim; Glamour VP and publisher Connie Anne Phillips opened up the eve with Conde exec Bob Sauerberg, talking about the mag’s essence: “courage, confidence, and, of course, optimism.” The glossy’s longtime top editrix, Cindi Leive, called this year’s winners “as gritty and as great as any who’ve come before them.” She then shared a trifecta of WOTY-worthy qualities: “They do what they love, and they started just like the rest of us; they’re real people, not just icons; they live by honoree Mindy Kaling‘s motto, ‘Why not me?'”

When Shonda Rhimes hit the stage to present “The Survivor” award to Robin Roberts, Rhimes, aka the TV dynamo who currently owns ABC’s Thursday night lineup, elicited copious gasps of adoration. “I’m telling you, that’s just season one!” Rhimes exclaimed after doing a quick recap of Roberts’ professional and personal trajectory. “Robin’s life is a powerful demonstration that the best stories are often true.” After a particularly moving short video on the anchor extraordinaire’s life, Roberts went up to snag her statue. “I think I was channeling [Scandal‘s] Olivia Pope tonight!” she said of her getup.

Things veered into stylish territory with “The Visionary” award, bestowed this year upon Sarah Burton of Alexander McQueen. “Sarah has taken the McQueen legacy to a beautiful new realm, designing with femininity and grace…There are not a lot of women like her in fashion,” said co-presenter Karen Elson of the designer (Karlie Kloss was on presenter duty, too, and both mods donned McQueen, of course). “In a world of bold personalities, her silence really impresses me. She lets the clothes speak for themselves,” Elson said. “Sarah was very much his secret weapon,” Anna Wintour said in a video on Burton and her massive, longterm impact on maison McQueen. “She totally lied to me!” Wintour said of Burton extremely secretively designing Kate Middleton‘s wedding gown. The New York Times’ Vanessa Friedman also weighed in on the designer in the vid. “There’s nothing about Sarah that screams creative genius, but she is,” Friedman said. “As a little girl, I dreamt of designing dresses and telling stories, and I’m so lucky that that became a reality,” Burton said while accepting his award.

Next up, Freida Pinto made a cameo to share the glossy’s latest female-empowering endeavor, The Girl Project, which supports at-risk girls globally who have to go through all sorts of hurdles to get an education. “Students who want to learn cannot be stopped; young women who so deserve an education will not be silenced,” Pinto said before awarding The Bravest Girls in the World accolade to a gaggle of girls from around the world who endure some pretty trying circumstances to succeed in (or even make it to) school. Then, Keri Russell presented “The Explorer” award to marine biologist and almost-octogenarian Sylvia Earle. “Her nickname is ‘Her Deepness’…she even even has her own Lego figurine!” Russell said of the aquatic expert extraordinaire. “I’m a scientist and generally speaking I do not feel very glamorous,” said Earle as she eloquently talked about her decades of research and extensive below-the-surface explorations.

Jodie Foster presented “The Advocate” award to Orange Is The New Black‘s Laverne Cox, and the audience’s response to both presenter and awardee was seriously robust. “Despite the fact that an untold number of people feel that their gender does not match the sex they were assigned at birth, transgender and gender nonconforming people often live complicated and precarious lives, facing shocking levels of harassment, discrimination, violence, and self harm. Enter the amazing Laverne Cox,” Foster said. “Because of Laverne, America now deeply understands what transgender means.”  After a particularly moving vid, Cox came up: “I am so honored to stand before you this evening [as] a proud, African American transgender woman…I love being a woman!…The issues of transgender women are women’s issues,” Cox declared. On the red carpet before the big show, Cox waxed poetic about her mom, who was on hand for the big award. “My mother has been such an amazing example of courage and moral fortitude,” Cox told us. “She taught me how to be a woman and how to work hard and overcome unimaginable circumstances and do it with elegance, style, and a little humor.”

And then, for some serious political muscle, it was time for “The Ambassador” award. “If Cindi were fighting the bad guys there wouldn’t be so many out there! Everything she touches turns to gold,” said winner Samantha Power, UN ambassador to the U.S. As for the brave journalist turned international relations dynamo’s very practical advice? “[Don’t] try to change whole world at once…just change your little slice of the world.” Duly noted.

Next up: a mod with a whole lot going for her besides being, you know, a total knockout. “What’s special about Natalia isn’t scale or swiftness of her success, it’s what she’s done with her success,” Arianna Huffington said of Natalia Vodianova, who has had a prolific 2014 with Vanity Fair and Vogue covers. Vodianova named the night’s “The Voice for Children” honor for her work with her Naked Heart Foundation, which has built more than 100 accessible parks and playgrounds, hosted conferences, and trained specialists for special needs children like her sister. “I’m so nervous,” Vodianova said to the crowd that included her mother who was visiting America for the first time. “This is indeed very special. Ten years ago I started here in New York. Even though our foundation focuses its work in Russia, it’s a New York born charity. I feel like today more than ever it’s because I was here that I had this courage to start this organization. When you live here, you feel like anything is possible and all your dreams can come true. If I had to do it today, it probably wouldn’t feel the same. I’m older so I’m less naive.”

Amy Schumer took a moment to honor Joan Rivers, with plenty of humor, fittingly. Things stayed very funny with “The Lady Boss” award. “Glamour magazine is all about stories of powerful women. No one has ever found the table of contents…I heard that the Donner party was looking for it,” Stephen Colbert joked as he thumbed through the glossy’s hefty latest issue before talking about Mindy Kaling. “Even more important than fighting stereotypes, [Kaling] will also embrace stereotypes for the most important reason: getting a laugh.” Before Kaling hit the stage, Colbert praised more of the funny lady’s charms: “She’s also broken the hateful cliche that glamorous, attractive women do not eat. I follow her Instagram, and I know that Mindy Kaling has eaten burritos that weigh more than Keira Knightley!” After a warm-up from Colbert, Kaling proceeded to continue cracking up Carnegie Hall. “Besides being a hero of mine, Stephen caught me the  great trick that when I say something offensive, I can just say, ‘That wasn’t me, that was my character.’ Without that advice, I would not be here tonight. I would be in prison,” Kaling joked.

Whoopi Goldberg presented “The Women’s Champion” award to Chelsea Clinton. The night marked another special occasion for new mom Clinton, besides nabbing an award: “This is my first night out! I had begun to wonder if I would ever wear a fancy dress or high-heeled shoes or hold adult conversations again,” she said of her first eve sans six and a half week-old daughter Charlotte. Clinton got a whole lot of whoops, hollers, and claps for that tidbit in particular. Lastly, Lupita Nyong’o closed out the night with “The Breakthrough” award. (Pre-show, Nyong’o shared the very best style advice she’s ever received: “Don’t wear heels you can’t walk in.”) Consider us touched, inspired, and tickled by this year’s WOTY winners. Until next November!