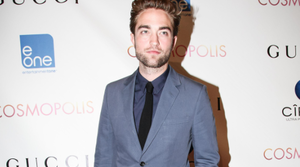 (NEW YORK) A Sneak Peek At Robert Pattison’s Much Talked About Dior Homme Ad [The Cut]
Spoiler alert: the tweeted picture involves a bathtub and an introduction to a new hashtag, #DiorRob.

Are Fashion Designers Leading Innovation In The Field Of Make-Up? [New York Times]
From Marc Jacobs to Alber Elbaz, Tom Ford and Michael Kors, a very definite pattern has evolved.

Designer Anna Stretton Is Looking For A Same Sex Couple To Tie The Knot On Her Runway [Vogue UK]
The New Zealand designer is celebrating her country’s new marriage law and is inviting Australians to join in.

Alexa Chung Admits To MyTheresa.com That She Is A Shopaholic [Refinery 29]
Via video, she also reveals to the e-tailer her feelings toward style, inspiration and her approach to getting dressed.

Kurt Geiger Looks So Young For 50