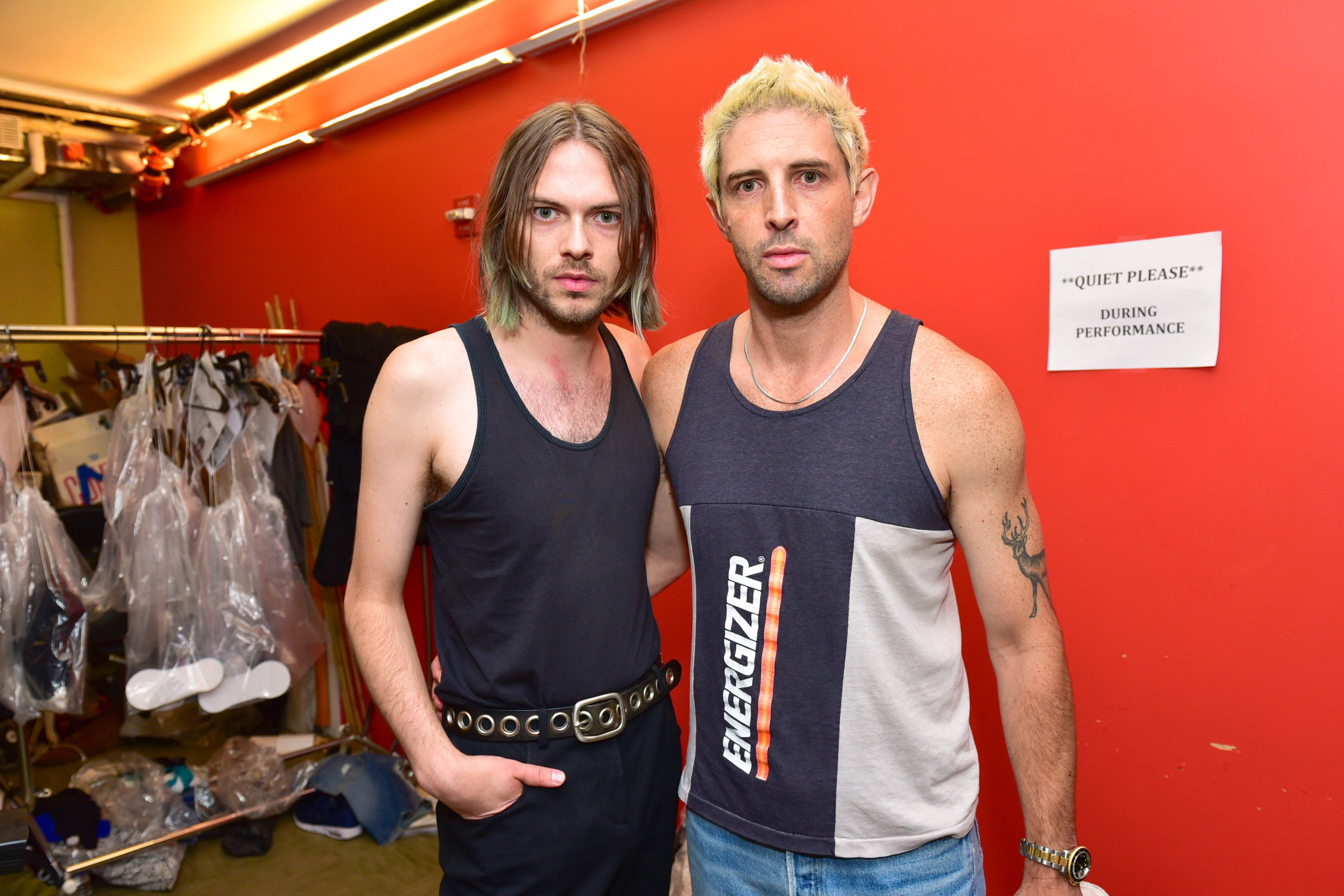 Sam Linder and Kirk Miller of Linder originally started the business as an online e-commerce boutique selling other designers’ clothing, but quickly realized they wanted to sell their own ideas. The New York-based duo, with no former experience designing clothing for a brand, spent two years figuring out the ins and outs of the business. Now, with three years under their belt, Linder and Miller say they’ve finally nailed their aesthetic and are ready for the spotlight. Linder showed its debut runway collection yesterday at Dixon Place on Chrystie Street on New York’s Lower East Side. The result? Mostly wearable but edgy menswear with a twist. In fact, the Linder man is undefinable in a way that is increasingly being embraced by both designers and youth culture, which applies to both clothing and gender alike. Here you have men in skirts and crop tops (not a first, but Linder had a few new takes on the gender-bending trend), and female mods were incorporated into the show for the first time after the designers found that women were buying pieces from the brick-and-mortar store on 128 Thompson Street. Linder and Miller give us the rundown on their brand (r)evolution.

How did you meet?
SL: We sort of met randomly. I am a lot older than Kirk and had been in New York for a long time. Kirk had been here for a few years, but we met when he was working in a store. I was working in photography and art. We just got along and started to see that maybe there was potential to do something together. We started doing online retail. It was a way for us to start working together, but it wasn’t really going to excite either one of us. We really wanted to be making our own stuff. Then we had to go through a period of figuring out what it means to produce a collection and also getting on the same page about what we are trying to do creatively.
KM: I think collaboration has been amazing. Maintaining our relationship as creative partners is a lot of work, but I think it has been very enriching and it’s been surprising, too, as far as the results go.

At what point did you feel like you had achieved the DNA of Linder?
KM: I would say kind of within the last year we’ve really become a brand. Fall 2016 was probably the first time we really felt as though we had a collection that we both were excited about. The first two years we were trying to figure out how to produce clothes, where to produce them, all that kind of stuff. Of course, those answers are never final—you’re always changing and discovering new things you want to try that are going to be harder than the last thing you did.

How did you learn about all of the behind-the-scenes nuances like production? Did you have mentors?
KM: I went to school for design, but I haven’t designed for anyone before. That is always the advice people give you, to go work for someone else first. We hired a production person who showed us how you maneuver throughout the Garment District, but this person came from a much bigger company. In the end we felt we needed someone from a business more on our scale.
SL: That was part of the learning process. She was great and got us over the hump of the basic ABC’s of production, but we are not in the same business as these big fish. We have to approach things in a very different way. Fabric minimums are a constant battle. Kirk had more of a background, just awareness of the industry first going in. I had a little bit of experience with relatively large scale projects, but neither one of us had done this specifically. I would say the first couple of years was like school for us.

How would you describe the aesthetic?
SL: It’s really hard for us to do that. We always struggle to put it into words…I think we are in that conversation that is happening about wearable everyday clothing but wanting it to feel imaginative and luxurious. How do you make something feel like a special garment that has something to say but is also something that you are going to throw on and actually wear in real life?
KM: I think fashion used to be a bit more like that, to be honest. Then it seemed like ready-to-wear started getting into this realm that is very tough to wear or is out of touch. I think Sam and I are not super formal people. It’s not that we design for ourselves—I don’t think we are sitting there being like, I want to make sure I can wear this—but it is kind of about being realistic and about what we relate to. Both of us are wearing old pairs of jeans today.

What have you learned about your customer, since you have a store already?
SL: We have a lot of creatives buying—musicians, graphic designers, and artists.
KM: Opening a store is huge. We are constantly learning and improving and changing.
SL: We frequently have women buying the collection. We call it menswear partly because that is what we are thinking about when we are making it. Neither one of us really likes the term “unisex.” There is nothing about almost any of the garments that we make that wouldn’t look good on a woman, and we can size them all the way down so they fit.
KM: I would hope that, especially with the direction we are headed in, that we are speaking to everybody and exciting their fantasy.

What can we expect for Spring 2017?
SL: We don’t have the type of inspiration where there is a theme but you are going to see a lot of garments that have tension to them because there is something either masculine altered to become more feminine or pieces with elements of two different types of garments brought together.
KM: The collection feels a bit warped or skewed, like a fun house mirror effect. You will see that we had fun designing the collection. It is a little bit dark and I think that is exciting. We love tension.

Joseph Abboud on His Spring/Summer ’17 Collection