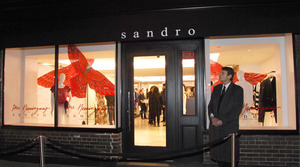 (NEW YORK) Private equity firm KKR is in exclusive talks to acquire a majority stake in Sandro, Maje, and Claudie Pierlot, according to an inside source. The value of the sale is estimated at 650 million euros, or $880 million at the current exchange rate. Rumors swirling the potential acquisition of the three fashion brands initally surfaced in January. KKR rival, Carlyle, was also purported to be a front-runner on the short list along with PAI Partners, CVC Capital Partners, Wendel, Hong Kong-based holding company Sire Pacific, and French private equity firm Eurazeo.

Altogether, Sandro, Maje, and Claudie Pierlotd operate approximately 500 stores worldwide and generate an estimated 300 million euros in annual sales under holding company SMCP. Currently, LVMH chief Bernard Arnault‘s L Capital owns half of the 51 percent stake on the auction block while Florac controls the other half. The remaining 49 percent is owned by sister duo Judith Milgrom and Evelyne Chetrite, who co-founded Maje and Sandro. Reps for the three brands could not be immediately reached for comment.