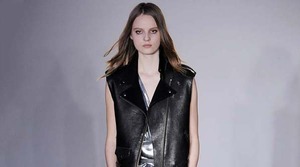 (NEW YORK) Edun has poached T by Alexander Wang’s design director, Danielle Sherman, as its new creative director. Sherman succeeds former Edun creative director Sharon Wauchob, who joined the company in 2009 in a consulting capacity and was later named creative director in January 2010. Wauchob is leaving after six seasons to focus on her eponymous collection.

“Coming from her success with two well-respected brands, Danielle brings her experience and strong design sensibility to Edun,” said Edun co-founder Ali Hewson, who started the socially-conscious brand with her husband, Bono, in 2005. “Bono and I are impressed by her creativity and believe her unique approach and vision will help grow the brand.”

Prior to her stint designing men’s and women’s at T, Sherman worked as head designer for Wang’s ready-to-wear line from 2008 to 2009. Before Wang, her childhood friend Ashley Olsen tapped her to help launch The Row, where she served as design director from 2005 to 2007. Sherman begins work at Edun today, and will report to chief executive officer Janice Sullivan.

Nine Things To Know About The Travel...