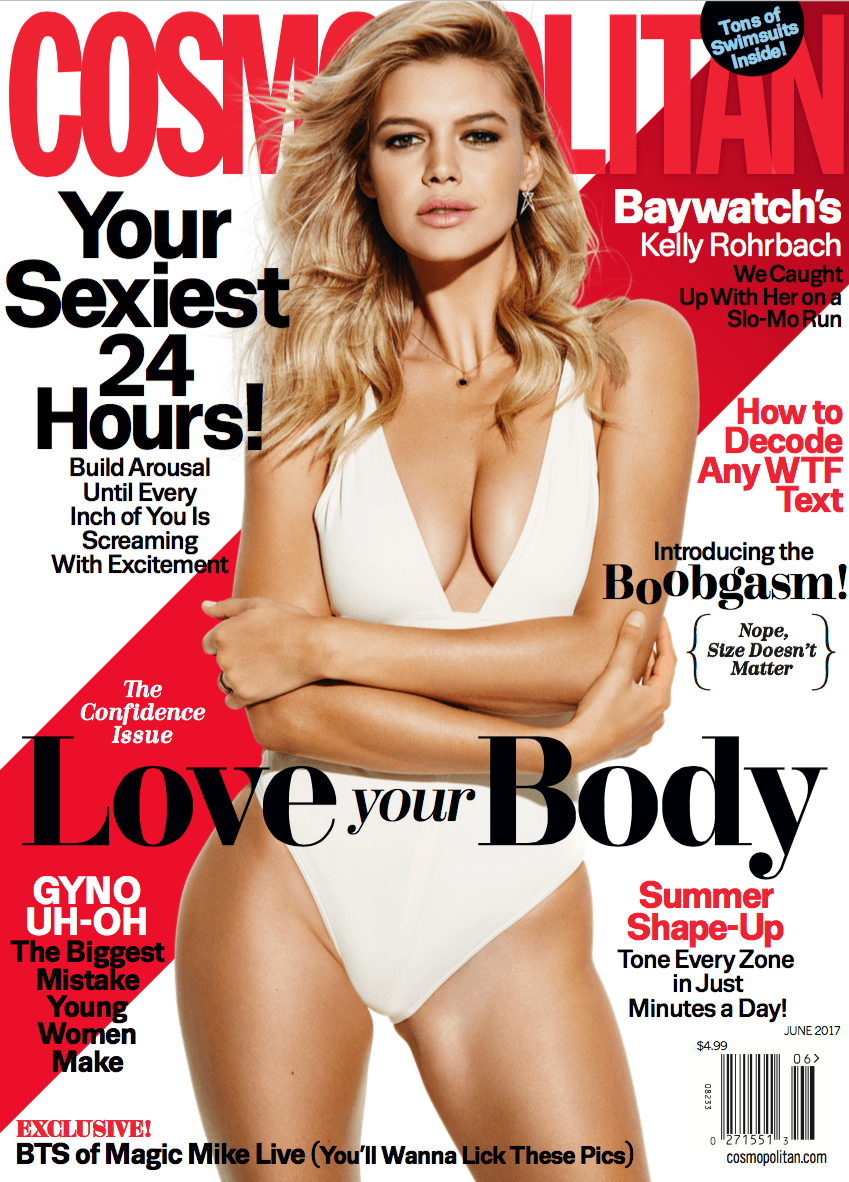 Baywatch babe Kelly Rohrbach turns up the heat on the cover of Cosmopolitan‘s June issue, lensed by James Macari. The movie, which hits theaters on May 25th, stars the beauty alongside Zac Efron, Dwayne Johnson, Priyanka Chopra, Alexandra Daddario, and more. On the cover, Rohrbach dons an off-white plunging Eres bathing suit,—it is the Confidence Issue, after all—stepping away from the iconic red one-piece that she wears in the film. In her cover story with Andrew Bevan (there you are!), the actress dishes on the updated bathing suit, why she made directors rewrite her character (#GirlBoss), and her type.

Rohrbach has not only made headlines for her upcoming film, but she’s also being linked to Aaron Rodgers, the long-time (and recent) ex-boyfriend of Olivia Munn—they were spotted together on a golf course a week ago. Last year, she dated modelizer Leonardo DiCaprio.

The interview can be read in full here, or peruse some highlights below.

She urged the director of Baywatch to rewrite her character C.J.: “I wasn’t interested in playing the hot-girl role. I didn’t want her to be an object but rather a dynamic, real person.”

Her “type” may surprise you: “Originally, my romantic interest, played by Jon Bass, is a Jonah Hill type. It was written that he had a big crush on [C.J.] and she’s kind of a bitch to him. I kept thinking, I would love this guy. I would hook up with him. He’s the funniest character, and to me, humor is the sexiest thing.”

The one crucial update to the iconic red one-piece she wears in Baywatch: “It’s scuba material, which is awesome because it’s literally like wearing Spanx that suck you right in. I was like, cheeseburgers, no problem. Just zip that thing up and it’s like it never happened.”

Her siblings have always kept her in check: “I was 5’ 9” when I was 12. My siblings would tease me and call me big friendly or freaky giant, and later, when I was approached about modeling, they would joke, ‘The BFG is gonna be a model? That clunky thing? They know how to keep me in check all right.”

The issue hits newsstands on May 9.

Kate Upton Signs with The Lions