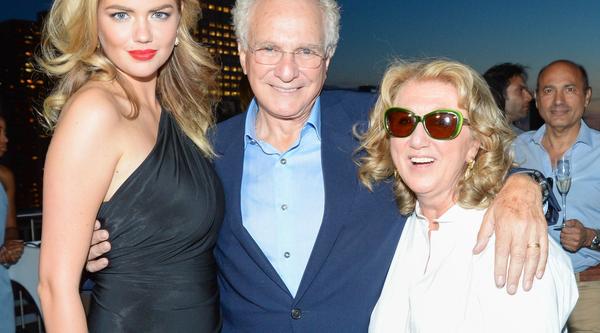 (NEW YORK) Without fail, guests at David Yurman’s annual rooftop soiree can be overheard saying, “How is it that every year they have nice weather at this event?” Clearly, last night was no exception, as guests sipped cocktails on top of the jeweler’s TriBeCa office HQ with a beautiful sunset falling over the Hudson and their new campaign images serving as the backdrop. The real thunder came when model du moment Kate Upton arrived fashionably late just as the party was about to wrap. Upton is the new face of David Yurman’s Fall 2013 ad campaign shot by Peter Lindbergh, and the mod stars alongside Dree Hemingway, Anais Mali, and Catrinel Marlon. As Upton made her way through the sea of cameras, the red-lipped, voluptuous blonde beauty stopped next to the huge projected image of her from the campaign flung her head back and threw up a leg to pose for photographers for a truly glam Marilyn moment. It’s not just the looks, but also about the ‘tude, right?

The Yurmans have been running their jewelry empire since the Eighties, so we had to ask if events like these seem run-of-the-mill for them these days. “No, because at this point we don’t really have to be doing it,” said Sybil Yurman. “We do it because we love it!” How much do the Yurmans love their business? “David and I actually attend the campaign shoots,” said Yurman. “I style all of the shoots with another stylist and I work with Lipman to pick out the models.” Naturally, we had to know how Upton acted on set. “She was really sweet, cooperative, and playful,” said Yurman. “Our shoots are known for being fun. If we’re eating or drinking on set it’s because we’re really having a party. It’s fun!”

We have to agree the Yurmans do indeed know how to throw a party. Their summer soiree brings out everyone in the biz from EICs like Lucky‘s Eva Chen and Teen Vogue‘s Amy Astley to fashion directors like Interview‘s Miguel Enamorado, Nylon‘s Jay Errico, GQ‘s Madeline Weeks, Lucky‘s Alexis Bryan Morgan, W‘s Karla Martinez and InStyle‘s Hal Rubenstein. And plenty of accessories editors, of course, like Marie Claire‘s Kyle Anderson, W‘s Claudia Mata, and Vogue‘s Selby Drummond and Rickie de Sole. In other words, tout le monde! The night ended with Sybil breaking it down with her grandaughter to DJ Kiss‘ tunes. Gotta love that.
PAIGE REDDINGER