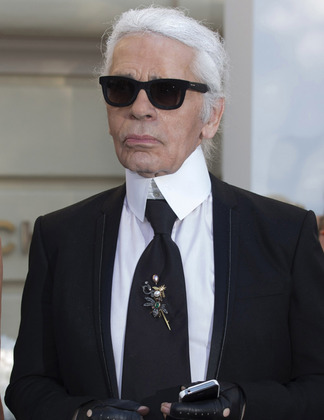 When the Kaiser speaks, everybody listens; the WWD CEO Summit was no exception. Karl amassed an entourage of attendees including SJP, Carine Roitfeld, Anna Wintour, and Stephen Gan. The industry elite listened as Karl and Bridget Foley discussed a wide range of topics, like hosting Chanel’s next Metiers d’Art show in Texas. Oh, Karl!

“In a way, my job is to make believe that something’s very Chanel even if that was something that was never done at Chanel. It’s like a game, and maybe I am not too bad a gambler.”—on balancing his own identity with that of Chanel’s DNA.

“We are pretty lucky. They may say I do the right thing. Somebody may do it better, but I don’t know who for the moment.”—on his performance as a designer.

“I am what people call a voyeur. I look at everything. I am like a building with an antenna that captures everything.”—on what inspires him.

“Next year I will go to Dallas. You know why? First of all, I love Texas, I love Texans, There’s another reason. When Chanel reopened, the French press were beyond nasty. The only press that understood it immediately was the American press.”—on opting to show beyond Paris.

“I don’t read contacts longer than one page because it’s boring and unnecessary.”—on working with the Chanel-owning Westheimers.

“Nothing is granted in fashion, and this is what I love about fashion.”—on industry competition.

“No memoirs. I have nothing to say, and what I could say, I cannot say.”—on a possible memoir.

“Modern is right for the moment and the next moment, but the word avant-garde is an over-used word.”—on diction that Karl loves…and hates.

“You think it’s a very distinct look. For me it’s a normal look. I have a shirt with a collar with a tie with a black jacket and jeans. I’m surprised myself. It’s not an invention — it’s a normal evolution.”—on his signature look.

Jetset with Tumi and Anna Sui