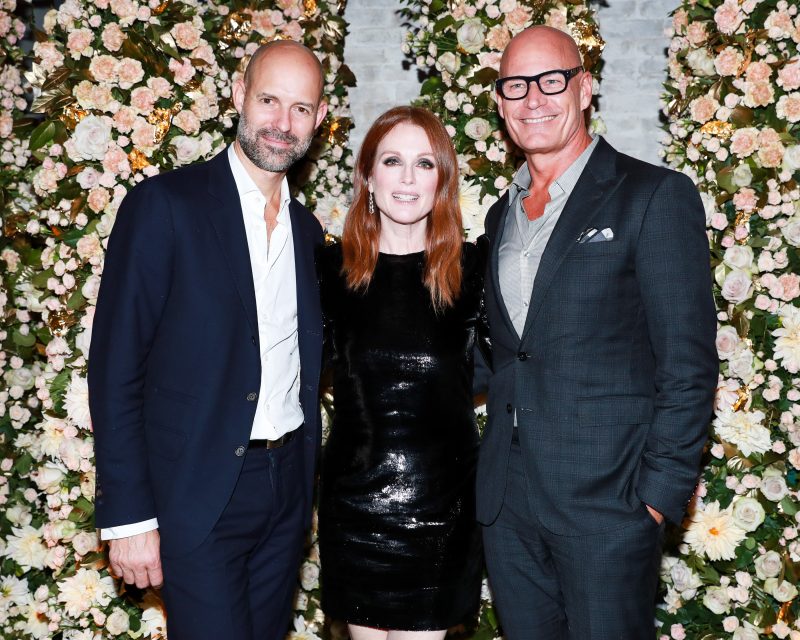 John Hardy and Vanity Fair brought out an A-list crowd to Le Coucou last night to celebrate the luxury jewelry brand’s new “Made for Legends” campaign, featuring Julianne Moore and Adwoa Aboah. While the top mod wasn’t able to attend, actress Julianne Moore held court, looking positively radiant. The new campaign, shot by Luigi & Iango, is meant to inspire women to create their own legends. “These women are true legends. John Hardy is honored to collaborate with such daring role models,” said Robert Hanson, CEO of John Hardy, in a statement. “They inspire women everywhere to create their own legend through the courage of their convictions, also reflected through their choices and personal expression wearing powerful, unique artisan hand-crafted jewelry.”

Moore, who has been carving out her own legend in Hollywood, furthered her mission along with John Hardy through a donation to be made by the brand to Moore’s charities that she champions, Children’s Health Fund and Everytown for Gun Safety. “You choose what speaks to you. When I was first introduced to Children’s Health, I was just so impressed with their work,” Moore told The Daily. “There’s a lot of talk about health care right now and this organization brings healthcare to underserved populations. It just kind of cuts through the middle and breaks through there. And in terms of Everytown for Gun Safety, after Sandy Hook I couldn’t just not do anything. I couldn’t take it anymore. So I started talking about gun violence and gun legislation. I got so much blow back that I said,  ‘I can’t stand this anymore.’ So I went to Everytown because I still admire the work they did. I asked them, ‘What can I do?’ And we started this counsel and brought together artists and creative people, who are willing to speak out about gun safety legislation. We show up and make calls.” Place cards were placed at each seat on the dinner table, in which guests were invited to make a tribute to a legend in their lives. A donation by John Hardy was to be made in their names to Moore’s charitable organizations.

“Julianne is a class act. She’s very humble and is well-known to be humble and not only that, but her beauty is also overwhelming,” said Luigi Murenu. “I think so many women can be inspired by her, in fact, the day the campaign came out we had so many famous actresses and top models that told us, ‘We want to be like this.’ She’s inspirational. Also, the message that she sends and what she believes in is such a good message.” Murenu added that the campaign shoot with John Hardy had been one of the best experiences he and Iango had ever had as photographers. “It was an amazing experience, because to get to work with such humble people is such a nice approach to our business, because Iango and I really feel that way too,” said Murenu. “We like to be surrounded by people that speak the same language. The whole creative team was very connected to each other including the talent and the client. It was a very beautiful journey, almost spiritual I would say.”

Quite a crowd of power women showed up to support the new campaign and its message about female empowerment including Inez van Lamsweerde along with partner Vinoodh Matadin, Zadie Smith, Jenna Lyons and Sunrise Coigney, Jasmine Tookes, Julie Taymor, Martha Stewart, and Lady Bunny—all legends in their own right.

It’s been quite a moment for women’s empowerment in recent months as women in entertainment and beyond have been finding their voice to stand up against injustices. “Empowerment that is such a big word,” said Moore. “But  I feel best is when I feel present. When you feel present, you feel like you are in your body. You feel like you are who you are and you are able to do your work and talk to people in a real way and connect with them. It’s about not being somewhere else. So I think presence matters more to me than this idea of power, because power is something we ascribe to status, so I really prefer to talk about being present.”

The images from the campaign will debut online and in print publications this Fall and will coincide with the release of the first collection from the brand’s first-ever female creative director, Hollie Bonneville Barden.