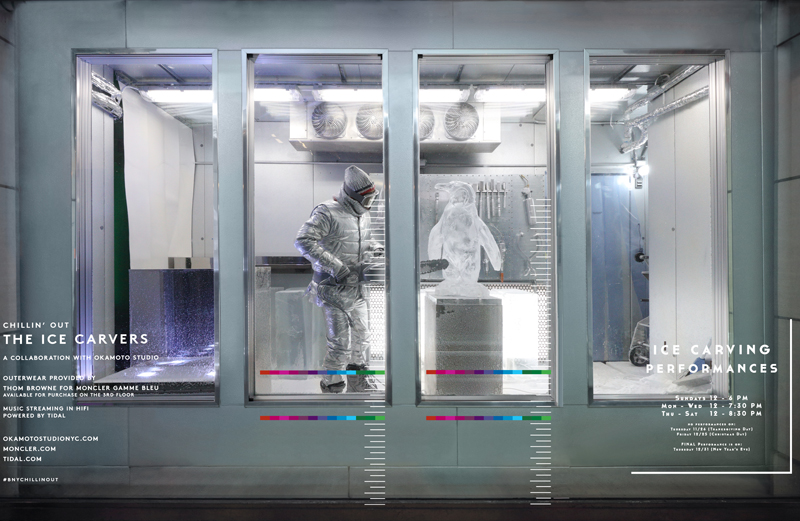 As top retailers begin to roll out elaborate holiday windows, Barneys New York unveiled its own imaginative, wintry wonderland today, titled “Chillin’ Out.” Ice carvers from the Okamoto Studio collective—who stand in the window decked out in silver metallic custom-designed outerwear by Thom Browne for Moncler Gamme Bleu—transform 20-by-30-inch blocks of ice into holiday sculptures in a 35-foot-tall “ice locker.” Catch them at work now through December 31.

“The Chillin’ Out window installations have been amongst the most creatively ambitious that our team has designed,” said Barneys New York creative director Dennis Freedman. “We’ve challenged ourselves to reach new heights in terms of technical advancements, but ultimately it’s the beauty and visual impact that really counts.”

For the holiday spectacle, Barneys New York partnered with Ice Castles—they build large-scale ice formations on mountaintops—to create the ice locker, which stays at a cool 3 to 15 degrees. The ice locker uses a process called “Icicle Farming.” Translation: It creates icicles that fuse together in intricate formations that constantly evolve. The scene comes to life with choreographed lights and a musical score by Hannis Brown.

And that’s still not all…Barneys also partnered with Lexus for a winter racetrack for crystal penguins! Taking inspiration from ZSL London Zoo’s Lubetkin Penguin Pool and children’s games, slot car designer Gary Gerding built a translucent polycarbonate track. The penguins race around the track perched on Lexus IS, GS G, and RC F cars, which were 3-D printed and are covered in crystals. An animated film by Invisible Light Network, set to a custom score by Amnon Freidlin, complete the scene.

For a sneak peek, check out the behind-the-scenes video below.