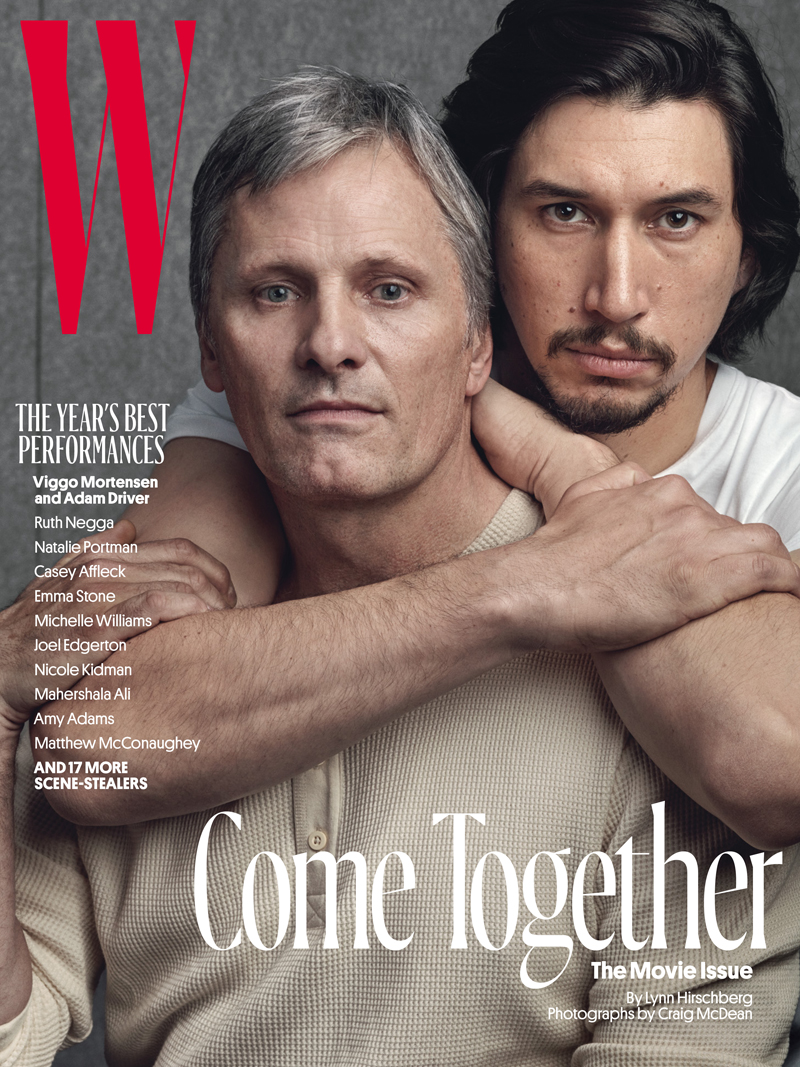 How to ring in awards season? With not one, but six covers and 12 cover stars, per W magazine’s standards. Fronting its Best Performances February issue are six sets of Hollywood starpower: Emma Stone and Casey Affleck, Natalie Portman and Ruth Negga, Amy Adams and Matthew McConaughey, Nicole Kidman and Mahershala Ali, Viggo Mortensen and Adam Driver, and Michelle Williams and Joel Edgerton. Inside the mag are 29 stars, including Taraji P. Henson, Dev Patel, Jeff Bridges, Annette Bening, and more, all handpicked by editor-at-large Lynn Hirschberg.

“Historically in America, during tough times people go to the movies,” she wrote in her feature. “They look for a romantic distraction or a place to cry or for charac­ters who speak to their struggles. Whatever your political leanings, the presidential election of 2016 was ugly and fractious. And yet, the movies last year were surprisingly thoughtful and inspiring…Our new government may be poised to move backward, but movies in 2016 continued to broaden their horizons—and ours.”

Naturally, Hirschberg interviewed the actors and actresses about the roles that are causing awards-buzz this year, while Craig McDean shot portraits and Edward Enninful was on styling duty. Here’s a preview of what’s inside; read the issue here.

Amy Adams Arrival and Nocturnal Animals
“Tom Ford became my muse on Nocturnal Animals. My character, Susan, was very personal to Tom, and so I based my interpretation on him. Tom would ask on set, ‘Why is Amy using her hands like that?’ and I said, ‘I’m copying you, Tom!’ I used him. I used him up.”

Emma Stone La La Land
“My real name is Emily Stone, but when I started acting, that name was already taken by another actress, so I had to come up with a different one. For a 16-year-old, picking a new name is an interesting prospect, and back then I said, “I’m now going to be called Riley Stone!’ So, for about six months I was called Riley. I landed a guest spot on Malcolm in the Middle, and one day they were calling, “Riley! Riley! Riley! We need you on set, Riley!’ and I had no idea who they were talking to. At that moment, I realized that I just couldn’t be Riley. So I became Emma. But I miss Emily. I would love to get her back.”

Natalie Portman Jackie
“Playing Jackie Kennedy is scary. I was nervous at first, and I started by doing a lot of research. The biographies on her are all a little bit trashy, but the transcripts of her interviews with the historian Arthur Schlesinger were really helpful. He taped everything and you can hear Jackie’s voice. Her intellect and her wit and what she’s bitter about are immediately apparent. At the same time, I was going to costume fittings and makeup tests. When I put on the Jackie wig, the physical and emotional sides came together. The hair itself is so iconic that once you have it right, you can start to see Jackie. I don’t really look like her, but I felt like I was in her skin.”

Ruth Negga Loving
“When I auditioned for the part of Mildred Loving, I had to sort of disappear into her character. Usually, I don’t create a costume for an audition, but this time I wore a summer dress. I knew that coming in the door looking like this woman would have an impact. A year later, I learned I got the part. At the premiere at the Cannes Film Festival, I walked up the steps of the Palais in full makeup, and I walked down the steps with mascara dripping. It was such an emotional experience. All I could think was that I needed to blow my nose before it dripped all over my frock.”