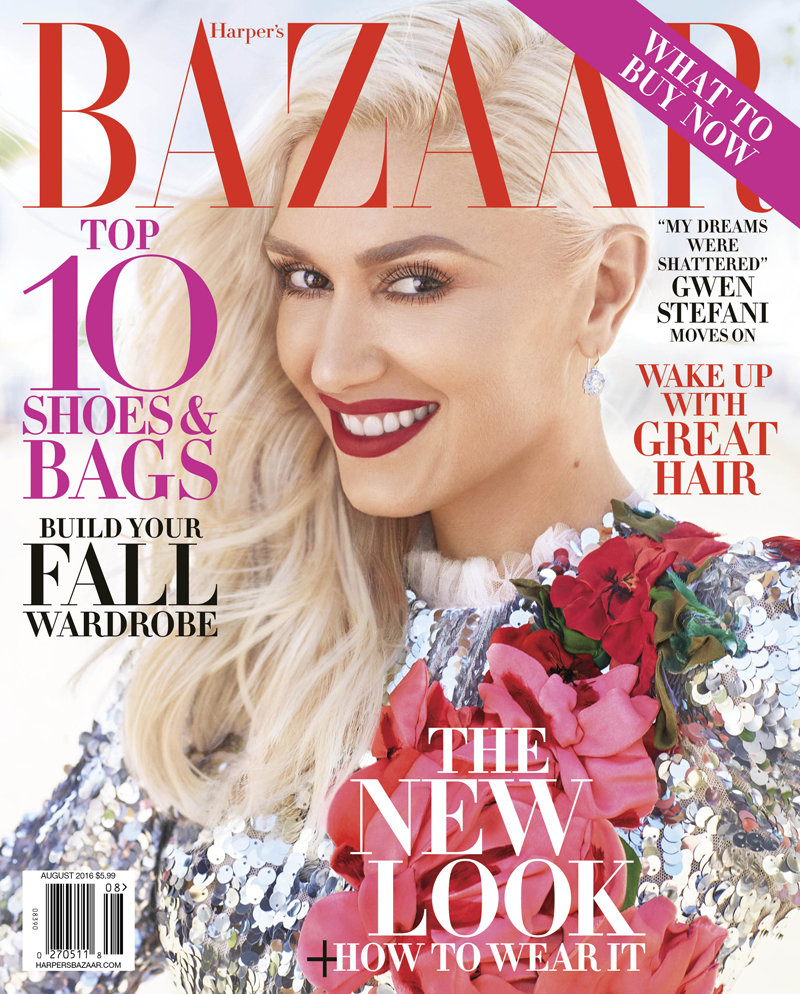 Gwen Stefani is flashing her pearly whites and iconic bleach blonde locks in Dolce & Gabbana on the cover of Harper’s Bazaar‘s August issue. The singer, musician, entrepreneur and entertainment personality has opened up to the glossy about her very personal, but very public divorce from her husband Gavin Rossdale and her new romance with Blake Shelton. In a candid interview, Stefani explains how the divorce rocked her world and how she learned to make the best out of a heart wrenching life change. It’s not the first time Stefani has been through a breakup after a long-term partnership after all. No Doubt’s Tragic Kingdom, which was largely based on her breakup with bassist Tony Kanal, rocketed her to stardom (a page Adele and Taylor Swift have since borrowed from her playbook).

Stefani, known equally for her personal style as her music, was shot by Alexi Lubomirski and inside the issue can be seen rocking an Alexander McQueen gown and Cartier bracelet and super sexy Roberto Cavalli silver suit (sans top) with a Chopard necklace. As Stefani puts it inside the interview, “It’s like, what’s there to hide?” Below are excerpts from the revealing interview, in which Stefani opens up for the first time outside of her music.

On her split with her husband of 11 years, Gavin Rossdale:
“It was so insane because not only did my family break up, but then my kids are taken away like half the time, so that was really like, ‘What?! What did I do?’ My dreams were shattered. All I wanted my whole life was to have babies, be married, like what my parents have. Then I remember thinking, ‘There’s gotta be a reason for this.’ Of course you go through the ‘Why me?’ and feel sorry for yourself. But then I was like, ‘No, this happened to me already and I made something good out of it,’ and that was Tragic Kingdom.”

On her relationship with beau Blake Shelton, how they made it through their divorces together—and then got together:
“[Backstage on the set of The Voice] Blake was like, ‘Everybody, before we go out there, I want to let everyone know that by the time this airs, I will be divorced.’… it was like being handed this gift of a friend who was going through the exact same thing at the exact same time. And then everything flipped. It went from horrible to, like, hopeful and like, ‘Wow, God, you just don’t know what’s gonna happen next.”

On why she’s an open book, but not all the time:
“It’s because I have children [Kingston, 10, Zuma, 7, and Apollo, 2]. As a famous person, you start to think, ‘I can’t say all that because I’ll embarrass them or hurt them in some way.’ And especially now because they can see everything and hear everything. But I’ve done nothing I’m ashamed of… [breaks into laughter] Well, we all have a few things we’re ashamed of.”

On forming No Doubt in high school, the breakup that led to the smash album Tragic Kingdom:
“We never meant to make it. Like, we just wanted to play shows, you know? And then I fall in love with this 16-year-old guy, Tony [Kanal], who ends up being our bass player, and we do everything together—and then he breaks up with me. I was like, ‘What am I doing? This is , like, seven years of my life. Then the next chapter: I meet Gavin, right? And that was it. [My personal life] was my boyfriend and then my husband.”

Tod’s Chic Celebration for the Restoration of the Colosseum