GQ Ushers In A New Gen With Gap 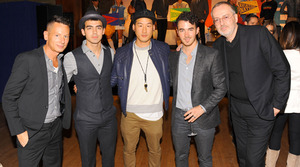 (NEW YORK) While all the attention seems to be on the women’s happenings in Europe right now, 268 Mulberry Street kept the New York men’s style scene very alive and well in Nolita last night. In a gymnasium venue more likely to host a dodgeball game, GQ threw a party with an almost school dance vibe to it to celebrate the “Best New Menswear Designers in America in 2013” collaboration with the Gap, which returns for a second year. The exclusive looks were created by (remember these names) Paige Mycoskie of Aviator Nation, Matt Baldwin of Baldwin, Liam Fayed and Sam Fayed of Bespoken and Ernest Alexander Sabine of Ernest Alexander. The designers’ Gap duds include everything from accessories to outerwear, priced at $30 to $348.

The evening was a who’s who of the men’s industry turned out for the occasion. GQ’s Jim Nelson, Jim Moore, Michael Hainey, Chris Mitchell, Ted Stafford, and Brendan Monaghan welcomed established faces such as Italo Zucchelli, Kenneth Cole, Rag & Bones’ David Neville and Marcus Wainright, Michael Bastian, Steven Alan, Richard Chai, and Gap’s VP of global menswear design Tony Kretten and creative director Rebekka Bay. The known names broke bread, uh, truffled burgers with the class of 2012 GQ X Gap alum Ian Velardi, Mark McNairy, Todd Snyder, and Johan Lindeberg. Talk about a VVVVIP list if there ever was one! Even Joe Jonas, Kevin Jonas, and Mets pitcher Matt Harvey made an appearance to take in a live performance by Drowners. You can check out the limited-edition collection in select stores and on Gap.com today.
EDDIE ROCHE