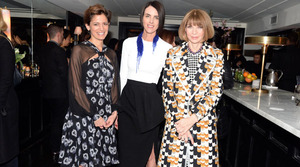 (NEW YORK) Despite the downpour, a chic smattering of designers, photogs, and eds popped by Omar’s in the West Village last eve to toast Glamour’s freshly minted fashion director, Jillian Davison. Even Anna Wintour made the rounds—fittingly, given that she’d been the matchmaker behind Glamour and Davison—and the mag’s EIC, Cindi Leive, was on hostess duty.

“I worked with a fashion team of just five people, including myself, turning out an edition of Vogue! I think I really accomplished some unique work that captured Australia and its fashion landscape,” Davison reflected of her most recent gig. Returning to the American glossy scene after as stint back Down Under had indeed been on Davison’s radar: “I’d lived in the States for 10 years before returning to Australia for the past four years, and I was definitely open to coming back [to the U.S.] for the right opportunity.” Mission accomplished, non?

The haute list of designers making the rounds was pretty major: Narciso Rodriguez, Prabal Gurung, Rag & Bone’s David Neville and Marcus Wainwright, Kenneth Cole, Thakoon Panichgul, Jennifer Fisher, Richard Chai, and Brian Atwood. Also on hand for the festivities: Patrick Demarchelier, Daniella Vitale, Steven Kolb, Malcolm Carfrae, Constance Jablonski, and legendary photographer Gilles Bensimon. What has Bensimon been up to lately? “Oh, a lot of shoots for Vogue Paris and some other exciting projects.” Très intriguing! Bensimon is also a member of the Jillian Davison fanclub, apparently: “I adore Jill, we recently did a shoot together for Vogue Australia,” the iconic shutterbug told The Daily.

The only person (almost) as busy air-kissing her way through the crowd was Leive. “Jill is one of the supreme fashion editors of our time. I’d admired her from a distance for years—I loved her work when she was at Teen Vogue in the U.S. and at Australian Vogue,” said Leive of the buzzy new hire. Turns out, the duo’s first encounter was quite recent. “The first time she and I had ever literally been in a room together was this past fall; Anna Wintour introduced us. Immediately I realized Jill is as wonderful a human being as she is a stylist, and you don’t always get those two things together in one package!” As for Leive’s M.O. for welcoming new hires to the Glamour orbit: “Other than the secret handshake?” the editrix said with a laugh. “But seriously, one of the ways you really get to know the magazine is our Women of The Year event.” Looks like Davison will just have to wait eight months for that part of the Glamour initiation process…
ALEXANDRA ILYASHOV