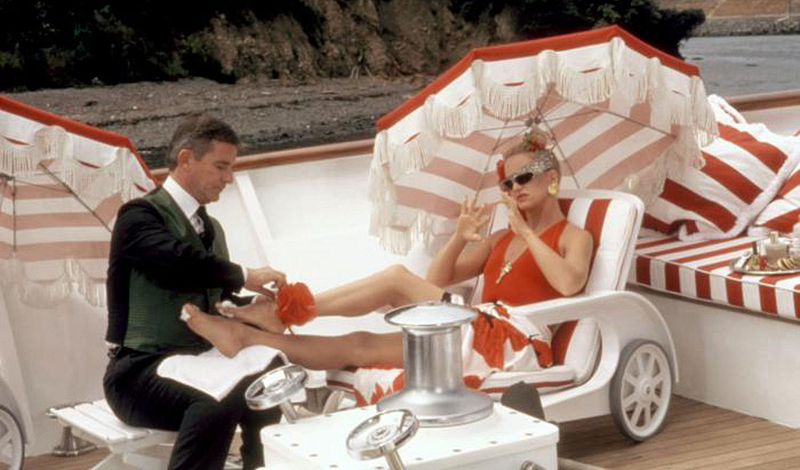 We noticed you really, really enjoyed our chat with a Hamptons rich kid earlier this month, but another classic anonymous interview was our 2013 chat with an exquisitely spoiled Southamptonite giving us the inside dirt. Let’s rewind and see what she has to say about gold diggers, designer drugs, and the joys of hungover parenting.

What’s the biggest misconception about the superrich?
That we’re not good parents. Most of the people I know are very good parents and spend a lot of time with their kids. It’s just a very different generation from our parents. We’ve figured out how to have fun and keep our youth going. What happens in the Hamptons is that people in their thirties, forties, and fifties are still living that kind of life that they had in their twenties and college years. The party just keeps going. My generation has figured out how to manage their time. It also helps to have staff.

Is it hard to parent with a massive hangover?
No! We’re sitting on the beach with our kids relaxing the next day and watching them run around. We manage just fine.

What happens at these parties?
The good news is that it’s not like the Seventies, where people switched spouses and there was all that lying and cheating. I don’t think that really happens as much. It’s all about having a good time. The girls want to hang out with the girls, and the guys want to hang out with the guys. At dinner parties where the table used to be man/woman seating, it’s now girls on one end and guys on the other. There’s a lot of rosé-drinking and post-dinner smoking. The new thing is Molly, which is something that you put on your tongue. I don’t even know what’s in it. Something with Ecstasy, I think. I keep hearing the word Molly everywhere.

Are there drug dealers in the Hamptons?
People get it from their New York City connections. I bet that doormen supply all the stuff in the city. I’m sure they’re tripling the price.

How many of your friends have drivers?
In the city, I’d say about 70 percent. In the Hamptons, about 20 percent have drivers, but I bet that will double this summer because of all the DUI busts.

Are the drivers treated like family?
No! They’re drivers. Out here people hire local guys to drive the car. If they have the driver from Manhattan come, that’s a whole other level of wealth. They have to put them up in a home or apartment.

How many of your friends have nannies?
I don’t know anybody who doesn’t have a nanny.

Could you raise kids without a nanny?
No.

Why?
It’s the downtime you get when you really can’t deal and you need to recover or relax. A lot of the men and women I know work out in the morning for two hours, and it’s the most valuable thing to them. I actually don’t know anyone who doesn’t work out anymore. Without a nanny one spouse would have to stay home. It just makes life easier.

How much plastic surgery is going on in your circle?
I would say about 90 percent of the women I know get work done. If you want to add in Botox, we can bring that number to 100 percent. Good for them. I have a friend who looks so much better since she’s done things to herself. Then there’s the ones who will overdo it, and you’re like, “Whoa!” In this day and age if you have a bad nose or you don’t like your breasts and you can improve it, what’s the downside?

Do women come East to recover from plastic surgery?
No way. They want to be looking their best before Memorial Day. People plan their surgeries around when they have to hit the beach. If you’re going to have your boobs done, you are not getting them done in July, you’re getting them done in early May. I’m sure plastic surgeons are very busy in April and May for certain things, and very busy in January and February for other things.

What’s the hot trend within your group?
There’s a whole new thing with liposuction that you can do where you can suck out fat from your arms. Everybody’s talking about that. It freaks me out. The other thing is fillers, like when you put needles in your face to plump it up. Another hot trend is eyelash extensions.

What does the Hamptons butler have to do?
Dry cleaning, arranging the schedules, telling the driver where the children need to go, helping with the weekend guests, making sure that all the reservations are correct, setting up the umbrella and towels on the beach. Everything you don’t want to do.

Where do all your friends want to be seen?
Ron Perelman’s party. When Jay-Z and Beyoncé were renting out here, everyone wanted to be invited to their parties. People love when Bill Clinton is around, though he’s more for the older generation.

What’s it like when the husbands go back to the city on Sunday night?
Women are so happy when the husbands leave. They’re like, “Honey, don’t miss that helicopter, don’t miss that ride!” Women of our generation like to be around other women. There’s some talk of women having affairs with the pool boy or the tennis coach, but I’ve personally never seen it, although I’ve heard about it for sure.

Are there a lot of affairs going on?
Amongst my crowd I don’t think anyone would want to risk their good life. That’s rolling the dice. Divorce is expensive and ugly. Life is good, especially in the Hamptons. Does it get any better than here?

Is there a lot of mommy juice consumed during the week?
Definitely. But more at night than during the day.

Are there a lot of cliques?
Totally! It’s like high school all over again. There’s the cool clique, the very prim and proper clique, and then there’s the wild and out-of-control clique.

What makes the cool people cool?
They’re a little more stylish, a little faster, outgoing, and, much like in high school, they’re probably a little better-looking. Like-minded people tend to stick together.

Do you know any gold diggers?
Are you serious? There are always gold diggers everywhere. Everybody is digging for gold.

Are you friends with any?
Sure!

What does it mean to be a gold digger?
To want a better life and make money your number-one priority? People are always on the look out for the BBD [bigger better deal]. Social climbing is worse than gold digging. That’s trying to be friends with someone who has money. A gold digger is generally a woman or even a man who is looking for a spouse that has money, which means security. A social climber is someone who is trying to amass as many socially high-caliber friends as they can. That’s more transparent to me than someone who is looking for a better life.

How do you spot them?
I run from them. Name dropping drives me crazy. That’s the first sign, and then asking you how many people you know or do you know this one and that one. That happens a lot out there. You’re putting the 1 percent wealthiest East Coast people all on one tiny little spot for two months. It’s like a feeding frenzy.

We talked to a Hamptons teenager in our last issue about allowance. What’s fair for a 16-year-old?
I have a kid that age and he gets $200 a week. I’m sure a lot of the teenagers out here have unlimited credit cards; that’s just what I do for my kid. That would include just spending money, because I pay for all of his meals. If he needs more, he tells me.

What areas make the rich queasy?
Westhampton, Quogue, and Montauk. No one is going that far out. It’s a nice place to visit.

What designers are in your closet?
Roberto Cavalli. For casual, I like Haute Hippie.

How much Gap is being worn?
None, but we love Kmart! It’s like an experience. Going to Kmart with your kids is a rite of passage, especially before they go to sleepaway camp.

Does that mean they go just once?
Yes.

What do they buy?
Everything they don’t need. They buy supplies and shampoos. They have everything there. It’s crazy. You can buy movies, dog houses, pool toys…

Are charity events fun?
They were. They need to come up with a new formula. There’s just nothing new to it. Everybody feels that way. It’s like, enough already with the luncheons. I’d rather just give money than go to another luncheon. You wind up spending so much money before the luncheon anyway. You buy a dress, a ticket, a raffle ticket. ECommerce has changed the way that women shop; someone has to figure out how to change the way that women give money.

The Unusual Suspects, Vol. 2: Been There, (Jourdan) Dunn That