The Unusual Suspects, Vol. 2: Been There, (Jourdan) Dunn That 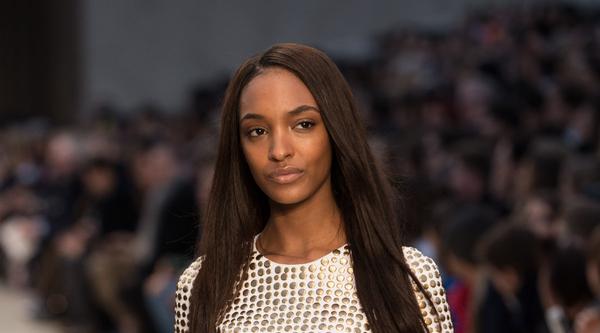 (NEW YORK) Think being a model is nonstop glamour, champagne, and free clothes? Think again! Jourdan Dunn opens up about why fittings are a bore, what she’s really thinking on the runway, and how irritating it is when you’re surprised that she actually eats. BY EDDIE ROCHE

How many New York Fashion Weeks will this be for you?
I took two seasons off when I had my son, but I’m thinking, it’s been about 10.

Do you look forward to this time of the year?
Ummmm…at the beginning I get really excited, especially in September, because it’s fun after the summer to catch up with everybody, but once you get to Europe, I’m kind of over it. When I’m in Milan I’m ready to just go home. New York and London are fun.

What tires you out?
People around you, the early call times, the late fittings, photographers in your face—there’s all of that.

What shows will you be walking in this year?
I don’t know. I don’t even know if I’m walking in any shows.

Is it annoying not knowing?
Not really.

What about in London?
I know I’ll be doing Burberry, Topshop, and maybe another one. I’m not going to stress myself out.

When you get cast in a show, how many fittings do you have to go to with a designer?
Normally it’s one fitting, but sometimes there is a refit.

Who are the most fun designers to do fittings with?
Alexander Wang’s are cool. I wouldn’t say fittings are fun. When I go into Alex’s showroom, it isn’t as daunting as the others.

Why aren’t they fun?
There might be five or more girls there and everybody has a set time slot, but there’s a lot of waiting. It doesn’t matter what time your appointment was. Sometimes it’s fun if there are snacks. If there are no snacks and it’s late at night and everybody is freaking miserable, I just want to go home.

Does it feel competitive?
For me it’s not. The girls who have done a few seasons, it’s like, whatever to them, but I sit back and laugh at the new faces. They get a bit competitive and it’s like, “Chill, it’s not that serious.”

Have you ever had any near falls?
There was a show where I couldn’t fit into the shoe and they had to cut the back and tape it up to make sure my foot didn’t come out. It was scary. It was good tape. But I have fallen!

Do tell!
It’s every girl’s worst nightmare. It was in London for the Issa show, and to make matters even worse, Naomi Campbell was also in the show. I tripped as I was just about to go backstage. There was blood on the dress. I was like, “Oh sh*t!” Then Naomi started asking everyone who fell. It was so embarrassing. I recovered. Blood and fashion!

Are you and Naomi close?
She’s been very supportive and has said if I ever need anyone to talk to, that she’s here. I’ve got her number. She gives me good advice.

Have you ever been yelled at by any photographers in the pit?
That’s happened to me once or twice if I missed the mark, and I’m like, “Why the hell are they shouting at me? What have I done? I’m just walking!” and then I realize, “Oh sh*t! I wasn’t in the light which is important for the designer and the photographers.

How about the whole myth that models don’t eat?
It gets annoying backstage when you’re about to eat something and there’s a photographer who finds it funny and wants to take a picture. The next day there is a photo on a blog about a model actually eating. It gets a bit tired.

In 2008 you were the first black model to walk for Prada in 10 years. How did that make you feel?
Prada is so famous for cutting girls at the last minute, like while a girl is lining up for the show. I’ve seen it happen. I didn’t get it until I was on the runway and I could feel that everybody was excited. “Oh, wow. A black face!” I don’t think I really knew it was going to be so big until it was in the papers and in the blogs.

There has been a lot of press about the lack of diversity on the runway.
This season will be interesting because a lot of influential people are now speaking out. After the whole Prada casting and the all-black Italian Vogue issue, there was a bit more improvement, but then it died down. We’ll see. I don’t think there has been any real change, to be honest.

You and Karlie are besties. How did you meet?
We had done shows before, but it wasn’t until we did the campaign for Topshop where we just started talking and found out we shared the same birthday, and realized we were destined to be good friends. Ever since, we’ve been so close.

The worst?
Being away from my son. All the traveling. I’m back and forth between London and New York a lot. It’s crazy.

Do you have a dream campaign?
A Maybelline contract.