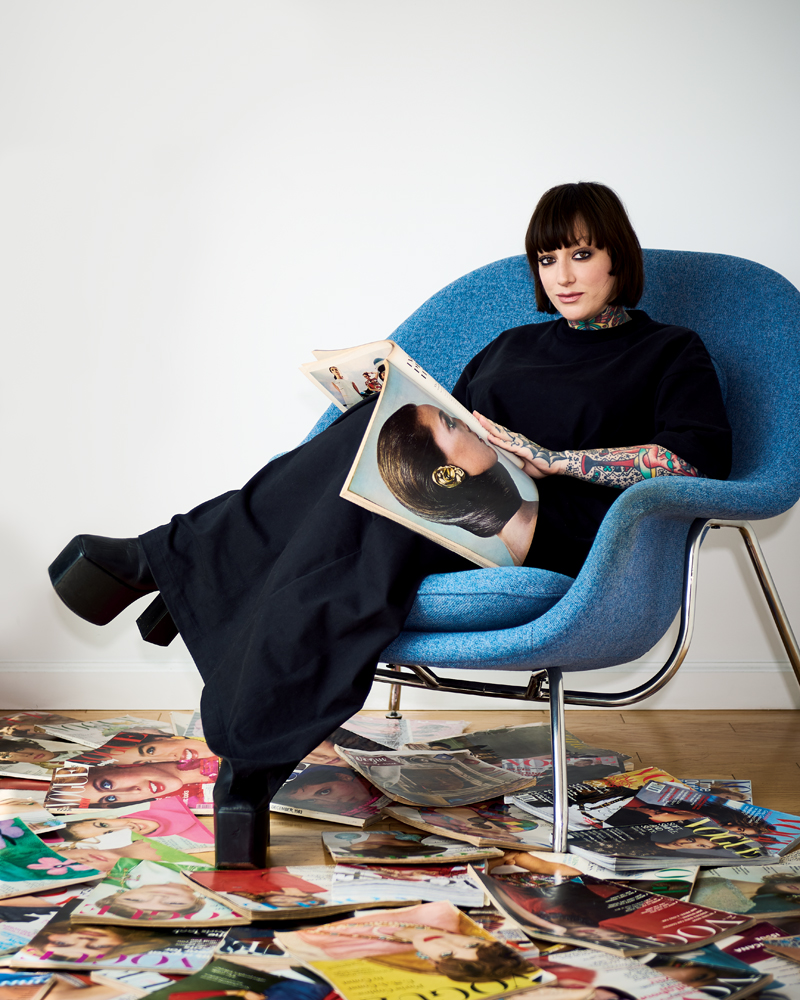 How does a small-town girl who covered her bedroom walls with beauty shots ripped from library books and magazines become Gigi Hadid’s go-to beauty guru? Erin Parsons, Maybelline’s global makeup artist, explains how she made it happen.

What’s your backstory?
I grew up mainly in Ohio, but I also lived in Illinois, Indiana, West Virginia, and Texas. During my last few years in high school, I lived in a small town in Ohio, and I just wanted to escape. I never had dreams of New York—I mean, I watched a lot of movies about it, but I didn’t realize this world really existed. I always did my makeup like the old movie stars. I shouldn’t say this, but I’d get biographies from the library and tear out pages and keep them! [Laughs] I grew up very poor and I needed these pictures—anything of Marilyn Monroe or Joan Crawford or Jean Harlow. I was so obsessed with the idea that a different shaped eyebrow or a red lip could change a person’s face. I grew up insecure, too, about my own looks. Experimenting with makeup made me feel better about myself.

When did you first start doing makeup professionally?
I worked in retail for 10 years, first at the Lancôme counter and then the M.A.C. counter. Finally, I decided to move to New York in 2008 with a dime in my pocket and a dream in my head, and it was not easy! I was dragging my kit everywhere on the subway, trying to get as many pictures as I could for my book. My goal was to assist somebody. I started assisting top artists—Gucci Westman, Mark Carrasquillo—and three months in, I got with Pat McGrath.

When did you decide to branch out on your own?
I worked with Pat for about six years. It was fun and a lot of work, and I did makeup on the supermodels of the world. We did experimental looks, like a Margiela or Dior show when John Galliano was there. I only left when I felt that I finally learned everything I could learn and I had gained confidence. The hardest thing is to overcome feeling inferior.

When did Gigi Hadid come calling?
I met Gigi in about 2014. She was really quiet and had a baby face. I did her makeup and she just transformed. I could sense that she liked it, and I could feel a difference in her attitude. I ended up working with her on a lot of shoots and shows while I was assisting Pat. I’m a Capricorn—Gigi has a saying, something about how all her friends are Capricorns. We just clicked. I genuinely like her as a human being…and I also love putting makeup on her. [Laughs] She’s so gorgeous. She recommended me to Maybelline, and one of the pictures we did together got Maybelline’s highest number of likes at the time. So they kept calling me. I had already put my notice in with Pat, but it was scary to leave!

What are some of your favorite Gigi looks?
I love the mermaid eye, which is what the look was named on social media. I had no idea the impact it was going to have. It wasn’t necessarily a high-fashion image—it was something more fun that the general public could enjoy. I love what we did more recently—the two different colored eyes with a wing and liner and the short hair. I think she likes becoming a character and playing dress-up. Every time I work with her, even with really natural makeup, she makes it look amazing.

What are some of the techniques you use?
I used to heavily contour her, almost to the mouth. I loved what it did on the runway. I fill in her brows by making them a little longer and drawing them out. I put individual lashes on her—she never likes too many. It’s kind of basic, but you find what works.

Who are some of the other models you work with?
Because of Maybelline, I work with Adriana Lima, Jourdan Dunn, Emily DiDonato, Herieth Paul…. I got to know a lot of great girls as an assistant, but it’s not like anyone was like, “I must have Erin on a shoot!” Gigi kind of did. She pushed for me, which was incredible.

Which products are your current favorites?
Nude lip liner, mascara, always an eyelash curler, and Maybelline’s Dream Cushion Foundation. It’s a cream with a puff and a little mirror, which is great, because I’m always putting on makeup in a cab.

Congrats on the award! Have you ever won anything before?
When I was in high school, I drew a picture of Christy Turlington in pencil. I won second place at some big art show. This all feels so strange! I think part of this is owed to my ketchup soup story.

Pardon?
About two years after moving to New York, I had no money, I couldn’t pay rent, and I literally only had ketchup packets in the fridge. So I squeezed out ketchup and made soup. It didn’t taste that bad, to be honest. [Laughs] I did a post on Instagram about it, which I ended up taking down, because I felt vulnerable, but it got so many likes and comments about how it helped others through tough times. Maybelline was like, “What’s this ketchup soup thing?” I’m not good at getting personal on social media. I haven’t really shared this much, but I didn’t grow up in a great household. We were very poor. It was a struggle just to dream. My outlet was looking at magazines. I remember tearing out the pages and hanging them all over my walls—it was kind of crazy. I was obsessed even then. Since I was 13, I’ve never not had a job. Working in retail and getting a taste of working with makeup, then coming here, meeting Pat, and now, this…. It’s kind of a bit surreal. The whole “make it happen” thing? I feel like I’ve done that.

How Emily DiDonato Is Building Her Digital...