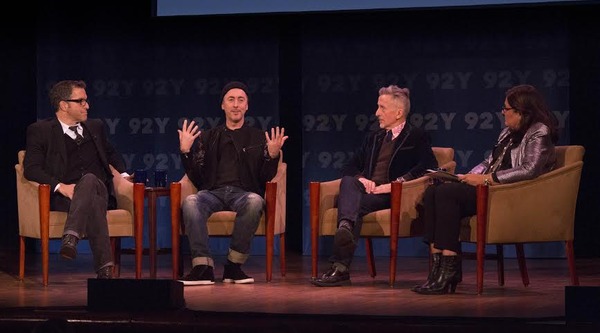 (NEW YORK) Instead of sitting front row on Wednesday night, Fern Mallis was front and center on stage at the 92Y for a lengthy chat with Kenneth Cole as part of her “Fashion Icons” series. The designer’s climb to fame came along with witty one-liners and punchy political sayings, and he proved to be ever the entertainer at the Q&A. As a sort of intermission, an HBO documentary, The Battle of amfAR, was shown to highlight Cole’s work towards finding a cure for AIDS. As a final treat, Simon Doonan and Alan Cumming joined Cole and Mallis to close out the night. And we took astute notes from start to finish…
BY DENA SILVER

Kenneth Cole
On his current age: “I started this business 30 years ago, when I was six.”

On how his parents met: “They met in upstate New York, somewhere in the Catskills. That’s where people met in those days.”

On choosing fashion over law: “I realized that law is a book, a compilation of initiatives. He who learns the best goes the furthest, but in business you write your own book every day.”

On renting a trailer and selling shoes at his first trade show: “I changed my company’s name from Kenneth Cole Inc. to Kenneth Cole Productions and we shot a feature film called The Birth of a Shoe Company. We had a director who sometimes shot and sometimes didn’t. And we sold 40,000 shoes in two days.”

On his gutsy ad campaigns: “I know I’ve gone places and said things that most wise business people wouldn’t, but I’ve always felt the need to connect with people in a relevant way.”

On irate feedback from fans: “One woman wrote this three-page, handwritten letter. At the end of it she wrote ‘I’ve bought my last pair of Cole Haan shoes.’ I guess that’s the price you have to pay.”

On leaving Wall Street: “The day I went private was far more invigorating than the day I went public. And I’d tell you about it, but it’s private.”

On wearing labels other than his own: “Not admittedly”

On all of his social media use: “I’m a little obsessed with social media and I’m trying to keep it in context, because social media is probably the most anti-social thing that we do every day. Today, ADD is something we all live with. And it’s not a medical or clinical condition, it’s socially imposed. It starts with social media. Kids today are bored unless they’re talking to five people online, at the same time.”

On stepping out on behalf of AIDS: “At that time, it was believed that if you had AIDS, you were either gay, Haitian or a drug addict. So as a single fashion designer, the assumption was obviously that I was Haitian.”

On his AIDs campaigns: “Every publication I went to with these [AIDS] ads were happy to print them. There was only one publication in New York that turned me down. It was Interview, at the time that Andy Warhol was there. The message that came back to me was that if Andy supports this, he will also have to support the ASPCA.”

Simon Doonan:
On the first supporters of AIDS: “When people like Anna Wintour and Donna Karan began emerging as very significant figures against AIDS, I can’t tell you how much that meant to us flailing faygalas, to have these iconic people on our side.

On AIDS as a killer: “Basically everyone I ever had sex with died of AIDS. I emerged as a very traumatized person.”

On Elizabeth Taylor: “We did this amfAR event with Vogue and Elizabeth Taylor was late. Every big name that you could imagine was waiting for her. I think she was doing her hair. Finally she arrived in with this new white hair and Lauren Bacall ran up to her and was like ‘Where have you been, missy?’ Elizabeth just made a face at her, but did it with so much laugh and love.”

ACRIA Brings Us Home For The Holidays

Kate Moss is a Calendar Girl For Hear The World Foundation