ACRIA Brings Us Home For The Holidays 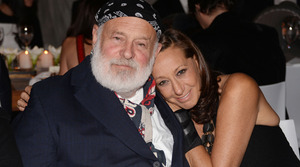 (NEW YORK) Now in its 18th year, ACRIA’s holiday dinner at the Urban Zen Center at the Stephan Weiss Studio has become one of the holiday’s most anticipated events in the busiest month on the calendar. This year, Ross Bleckner, Francisco Costa, Gabby and GianPaolo DeFelice, Ariel Foxman, Donna Karan, David Kleinberg, and Jack Pierson served as hosts for a special evening honoring Martha Nelson, Jonathan Horowitz, and Rob Pruitt with a special tribute to the late Judy Peabody.

The evening benefitted ACRIA, a leading HIV research and educational organization and the nation’s authority on the emerging issue of HIV and aging. After a lengthy cocktail hour and silent auction of art that raised a whopping $147,000 and included works from Deborah Kass, Ed Ruscha, Eva Lundsager, and Sylvia Hommert, guests sat down for dinner and remarks from the evening’s honorees. InStyle’s Foxman (whose title presented the evening, along with Tiffany’s and The Urban Zen Foundation) served as an unofficial MC. First up was diva Jessye Norman, whose tribute to the Peabody had the room in the palm of her hand. (She could write the book on how to captivate and command a crowd.) Foxman’s former boss and mentor Nelson was introduced by producer and pal Darren Star, who shared a story about co-hosting a party with her at his East Hampton home years ago.

“We both invited a list of guests with one caveat; there would be no press, no pictures, and not a word about it in the magazines,” Star shared. “I thought, ‘Wow, I really don’t understand the magazine business, but this sounds good to me.’ A week before the party, a gigantic tent began to go up in my backyard. Landscapers and lighting designers arrived to give the property a makeover, table settings were sent for approval, 100 umbrellas showed up in case it rained. I still had not met Martha, but I knew whoever this woman was, she meant business. When I finally met her the night of the party, which was the best party that nobody will ever see a picture of, I was struck by her warmth and her flawless skin. I expected her to be high-strung based off her high level of professionalism, but my first impression of Martha was serene. She was the most serene person that I have ever met. The best thing to come out of that night was my friendship with Martha. Her generosity and spirit made everyone feel so special and so welcome and that extends out into her life.”

Nelson told the crowd about her longtime work with ACRIA and its importance to her. “For me, this has really been a labor of love, as it is ultimately the way that I honor friends that I have lost very suddenly and unexpectedly long ago. I, like everyone else, have a lot of feelings about this epidemic: a sense of anger and frustration, mixed with a sense of hope and possibility. Let’s be honest, there are times when almost all of us have been just over it. I mean fatigued and worn out, just over it. I never let those feelings last long, because none of us can really ever be over AIDS until AIDS is truly over.” With a crowd that included the support of Bruce Weber, Nan Goldin, Adam Glassman, Eric Wilson, Calvin Klein, Kelly Klein, Bernadette Peters, Kate Foley, Misha Nonoo, Alexander Gilkes, Garrett Neff, and Kyle DeWoody, the media, fashion, and art worlds did a little something to see that day come.
EDDIE ROCHE

Go Out With A Bangle