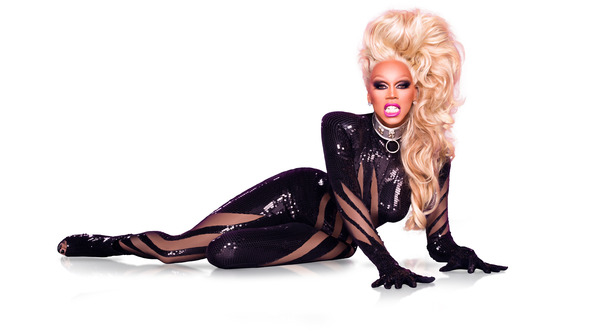 Time for another riotous tête-à-tête with Cosmo’s Sergio Kletnoy. This time around, he grilled RuPaul on, well, whatever he wanted to. Read on for the full, titillating discussion…

“The first time I saw RuPaul Andre Charles sashay across my television screen was back in the early ‘90s. Ru was wearing five-inch ‘hookah heels’, a dark green dress, a very expensive blonde wig while performing ‘House Of Love’ on BET’s Video Soul. I was mesmerized and in complete awe of this 6’4” blonde goddess singing to me from inside the tube. First time I actually met Ru was backstage at VH1’s The RuPaul Show, during my two-year stint as an intern at Arista Records. Our artist Deborah Cox performed on one of the episodes and I begged to come along. When Ru introduced himself to me I couldn’t utter one word, but inside I wanted to scream. When by chance we ran into eachother years later, during my first year at Marie Claire at the home of a mutual friend, we talked about music and our favorite artists for hours. I was playing it cool and didn’t get the chance to tell Ru how much I appreciated, loved and respected him. Of course all of this changed when after lots of begging and pleading, Ru finally granted me an interview a few days ago…”

What was your earliest musical memory?
It was watching The Supremes on The Ed Sullivan Show. I remember feeling like heaven and thinking oh my God…I loved these girls; I thought they were so beautiful.

Tell me about the first time you met Diana Ross…
I met her in Paris in 1995. We were both in the waiting room to catch the Concord to JFK. I was going back to New York to film To Wong Foo, Thanks For Everything! I remember I could hear her voice before I saw her. I was reading the paper and I was thinking oh my God, this is it, this is where it’s going to happen. I cried a little—then I collected myself. I went over to her and I said “Hi Diana, I’m RuPaul, pleasure to meet you.” And she said “Oh my goodness, hello!” I was very polite. Having been in show business, I didn’t want to scare her off with my enthusiasm. And we just hit it off. It was a great experience and it was a perfect first meeting. So cinematic that we’ve remained friends ever since.

What has been the best thing about doing RuPaul’s Drag Race?
The best thing is being the launching pad for the careers of these brilliant, courageous, fabulous entertainers who are working all over the world. It’s just great for me to see this happen because for so long it was just me and a handful of other girls who got real attention. This season [the show’s 6th], will mark 75 girls we will have released into the wild. I love it. My favorite moment(s) is each time I get to crown a new girl.

I think your favorite moment is yet to come: When Diana Ross finally appears as one of the guest judges on the panel.
That would be great. Or Cher—she is the ultimate drag queen.

I was with Drew Barrymore two weeks ago and she was talking about contouring and shading, and the only reason I knew what that meant was because of RuPaul’s Drag Race. You always look incredible on the show. How long does it take you to get ready?
I could do it in an hour, honestly, but we like to take our time. It’s all thanks to the genius of Matthew Anderson, who does the hair and makeup and the photography. He is the architect of the look that I’ve become synonymous with. We like to have coffee and have lunch and listen to music. We take our time.

Your partner in crime and fellow judge on the show is Michelle Visage, of the late ‘80s girl group Seduction. Did you know Michelle prior to working with her? Have you danced to her music when you were a club kid?
Oh yes, I knew her from the late ‘80s New York club scene.

I think she was 42 back then…
[Laughing] I met her at a club called Red Zone. She came to perform with her group and I saw her walking across the dance floor, and I thought oh my god, who the hell is that? She looked just like Madonna. It was so funny. Still funny.

Two mega successful TV shows, major movie appearances, many albums, books, appearances…what’s the one thing you haven’t done that you want to do?
I want a child. [Laughing]

You want to adopt me? I will move to L.A.
Well, I think we’re just going to have to do that. I don’t really want a child, but I do want you.

You’re at the forefront of the acceptance movement; the drag movement. How does that feel?
I think the reason I’ve been successful this late in my career is that I’ve persevered and stuck around. I love color, I love to laugh, I love beauty, so that’s what inspires me to stay interested. But drag is really all there is. The role of a drag queen in our culture is the same as a shaman or a witch doctor or a court jester, which is to remind our culture to not take itself so seriously. That’s why I called my new album Born Naked, because it’s always been my philosophy to not take life too seriously, have fun with it, enjoy the colors!

Up next: RuPaul’s best advice (ever), his thoughts on Judge Judy, and much more, right this way…

What has been the best advice you’ve ever received?
My 10th grade teacher told me ‘Rue, do not take life too seriously’. Nothing is so important that you would want to hurt somebody over it, or hurt yourself over it. Because when the clouds are overhead, know that the sun is shining on the other side of those clouds.

What’s one thing most people don’t know about you?
I’m really an introvert masquerading as an extrovert. I’m a Scorpio, so there’s an extra intense side that I cover up and camouflage with drag, which is colorful and fun and approachable but the other side of that coin is very dark and intense.

First thing on your mind when you wake up?
Meditate, stretch, and pray. I’m not religious but I will pray and meditate and center myself.

Who are your style icons?
Cary Grant, Nicole Kidman, and Sharon Stone.

Season 6 of RuPaul’s Drag Race airs on Logo on Mondays, and RuPaul’s brand new album Born Naked is in stores now. Now sashay away from the computer, run out to your local music store, and get your copy today!