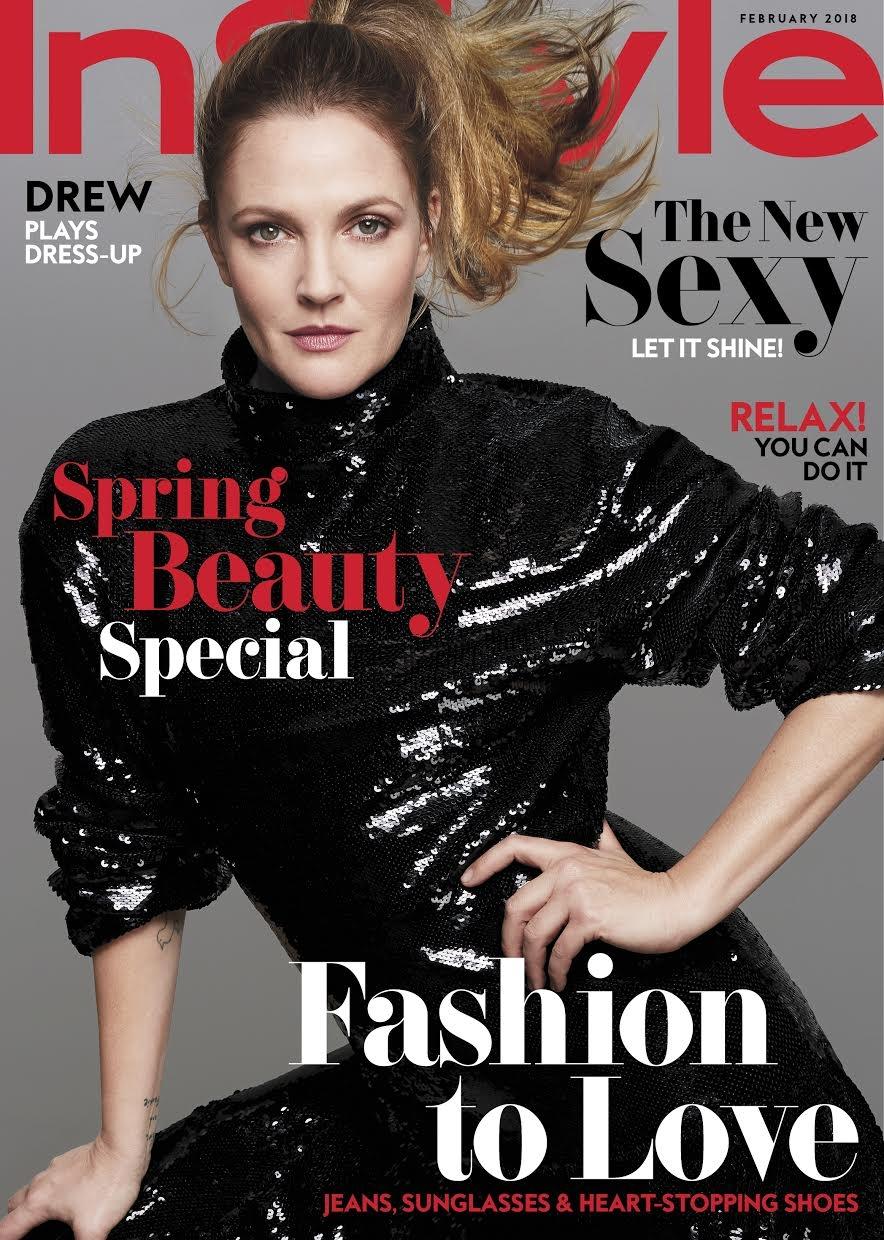 ‘Tis the season to wear sequins, and Drew Barrymore is stunning in them on the cover of InStyle‘s February issue. Anthony Maule lensed the actress, who fashioned Celine for the gig. The Santa Clarita Diet star sat down with InStyle at her New York apartment to chat about growing up in the spotlight (the bad and the good), her debut clothing collection, being a mother (and most days, a homebody), and what really drives her up a wall.  For her shoot, Barrymore also pulled some photos out of the archives and InStyle recreated them, asking her to wear Grown Up-Drew outfits reflecting Little Drew’s style. Peruse some of her most interesting quotes, below!

On Dear Drew, her clothing collection with Amazon Fashion
“I kept feeling this burning desire to build an apparel brand for women by women, to explore something romantic…I thought, ‘There is enough shit in life. I want optimism and joy.’ At the same time, I don’t like magic-wand happy endings – and now I don’t like magic-wand makeup or magic-wand clothes.”
On growing up in show business
“From a young age I was overly passionate and thought everything lived and died in a professional atmosphere because, back then, it was really all I had. I didn’t have a family. I’ve been working as long as I can remember.”
On her extreme moods
“God or the devil, face ripper or ‘Take the shirt off my back,’ I definitely have a ferociousness. And I’ve always had it. I completely rebel against authority…I am very fucking scrappy.”
On not needing a romantic relationship
“My daughters are so fulfilling that I feel like my cup is just avalanching over. If love took on a physical analogy form, I’d be an overstuffed turkey or piñata. So I’m not really hungry for it at this moment. I don’t think I would have ever known that I could be this content, this whole, without being in a romantic relationship. That would have been a surprise to my younger self.”
Drew Barrymoreslider
0 comment 1 FacebookTwitterPinterestLinkedinTumblrEmail