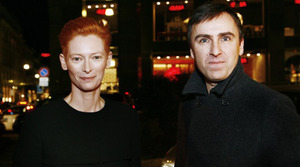 Yes! Yes! Yes! Raf Simons is coming to a screen near you in the upcoming documentary, Dior and I or Dior et Moi in French. Set to debut on April 17th at the Tribeca Film Festival, the doc will feature the story of putting together Simons’ debut couture collection for the house. Frédéric Tcheng, who has Valentino: The Last Emperor and Diana Vreeland’s The Eye Has To Travel on his IMDB credits, will be directing and producing the film. Variety reports that the documentary will also feature the seamstresses of the Dior atelier. We’re so ready for this one!

Watch the Trailer for “McQueen,” the Alexander...

Anna Wintour Returns To The Screen in...