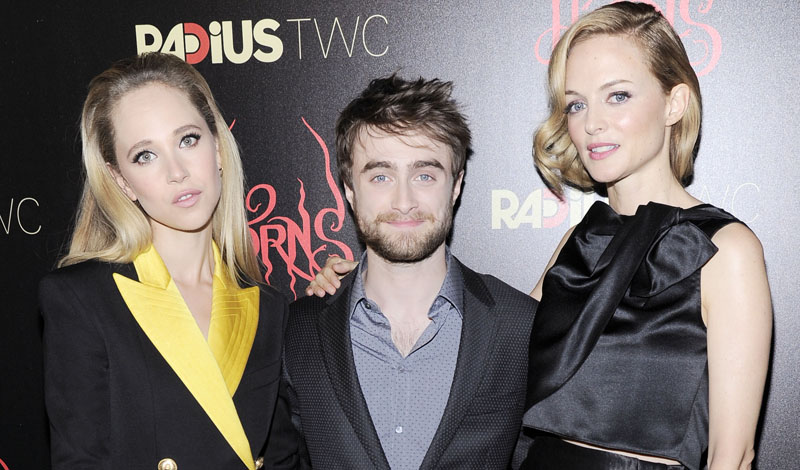 Last night, The Cinema Society and RADiUS TWC hosted Daniel Radcliffe‘s latest release post-Harry Potter. This time around, Radcliffe took on the devilish lead role of Ig in Horns, directed by Alexandre Aja. True to the film’s title, Daniel did indeed rock horns for most of the movie. Turns out, he loved them: “I would absolutely wear them out. Halloween would be the perfect time I suppose,” Radcliffe told The Daily. “They look right for something that has to get stuck on your head. That could go very wrong, but they looked really cool.” The film also stars newcomer Juno Temple, who arrived at the premiere with blonde locks—quite a departure from the red coif she sported as Radcliffe’s love interest, Merrin, in the film. “It was magic,” Juno said of working with Daniel. “He’s such an incredible human being, and such an amazing, giving actor. I loved every second of it.”

Heather Graham, who made a cameo in the film, was on hand for the occasion, as well as Rufus Wainwright, Nas, Olivier Theyskens, Nicole Miller, Lydia Hearst, Glee‘s Nolan Gerard Funk, and Johannes Huebl, all of whom made the trip from Landmark Sunshine Cinemas to Jimmy at The James Hotel for an after-party bacchanal put on by Qui Tequila. After all those tequila cocktails, the evening was capped at midnight when everyone grabbed a glass of champagne to ring in Cinema Society founder Andrew Saffir‘s birthday. Bonne anniversaire, Andrew!