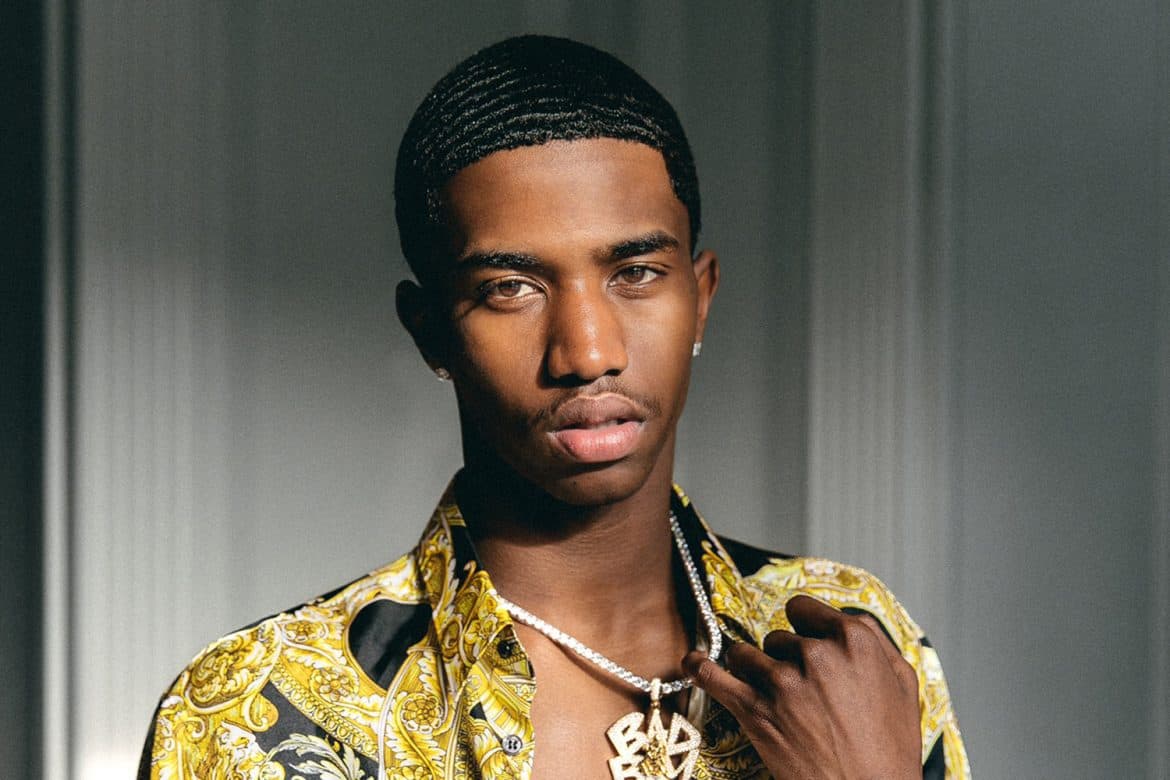 Christian Combs, the son of famed Kim Porter and Sean Combs (aka Puff Daddy), recently launched his first EP, Cyncerely, C3, and is paving the way for the next generation of Fashion and Hip-Hop. The Daily caught up with the tastemaker/rapper/model to discuss turning 21, his multiple personalities and whether he has any plans to work with his famous father some day.

Happy Birthday Christian! What was the first thing you did when you turned 21?
Take a shot of black raspberry Ciroc and I was with all my friends by the pool. It was lit!

What was the craziest gift you received?
My all-gold jet ski!  It has Bluetooth speakers so I can play my whole mix-tape super loud.

Did you treat yourself to anything special?
I got myself a bust down watch from Audemars Piguet. I’m becoming a man so I had to let it show on my wrist. I’ve been saving up for that! 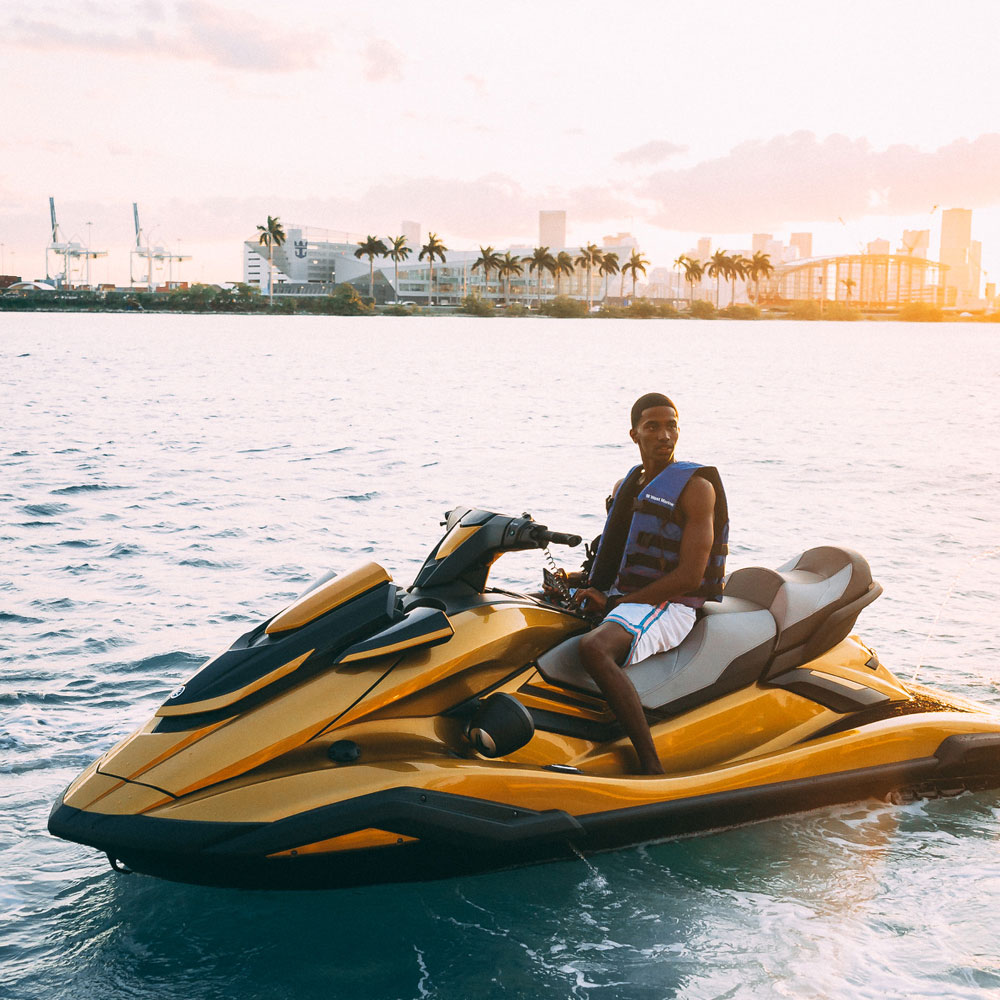 This has been a year filled with incredible highs and extreme lows for you. I’m so sorry for the loss of your mom. [Christian’s mother, Kim Porter passed unexpectedly November 15, 2018] How are you doing?
Thank you. I’m doing well. I’m connecting with family; we’ve been all getting a lot closer.

Your mother was a beautiful, strong, and accomplished woman. What impact did she have on your career and life goals?
She had a really big impact. She always made sure that I kept working and always told me to be myself. She wanted to make sure that I never tried to be like anyone else; because she always said I had the most swag! No one could be me, even if they tried. She told me I had to be true to myself.

This is a big moment for your career with your new EP Cyncerely,C3 recently dropping. What mood were you trying to convey on this record?
On this record, I wanted to do something that I felt had never really been done before, and just choose a whole bunch of different sounds and put it all into one body of work because there are a lot of different sides to my artistry, so I wanted to show that in one.

Tell me a little about these different sides of you. I hear C3 is your alter ego? How does he differ from your real name, Christian, and your stage name, King Combs?
C3 is an alter ego and it is Cyncerely. That’s basically saying sincerely, but C-Y-N is the group. It’s my clique. C3, that’s my alter ego because I have three Cs in my name. Christian Casey Combs. C3 is every single personality that I have. The crazy side, cool side, lady’s man side, the clique side. King Combs might just be the artist, Christian, might just be a family man, but C3 is all of that. 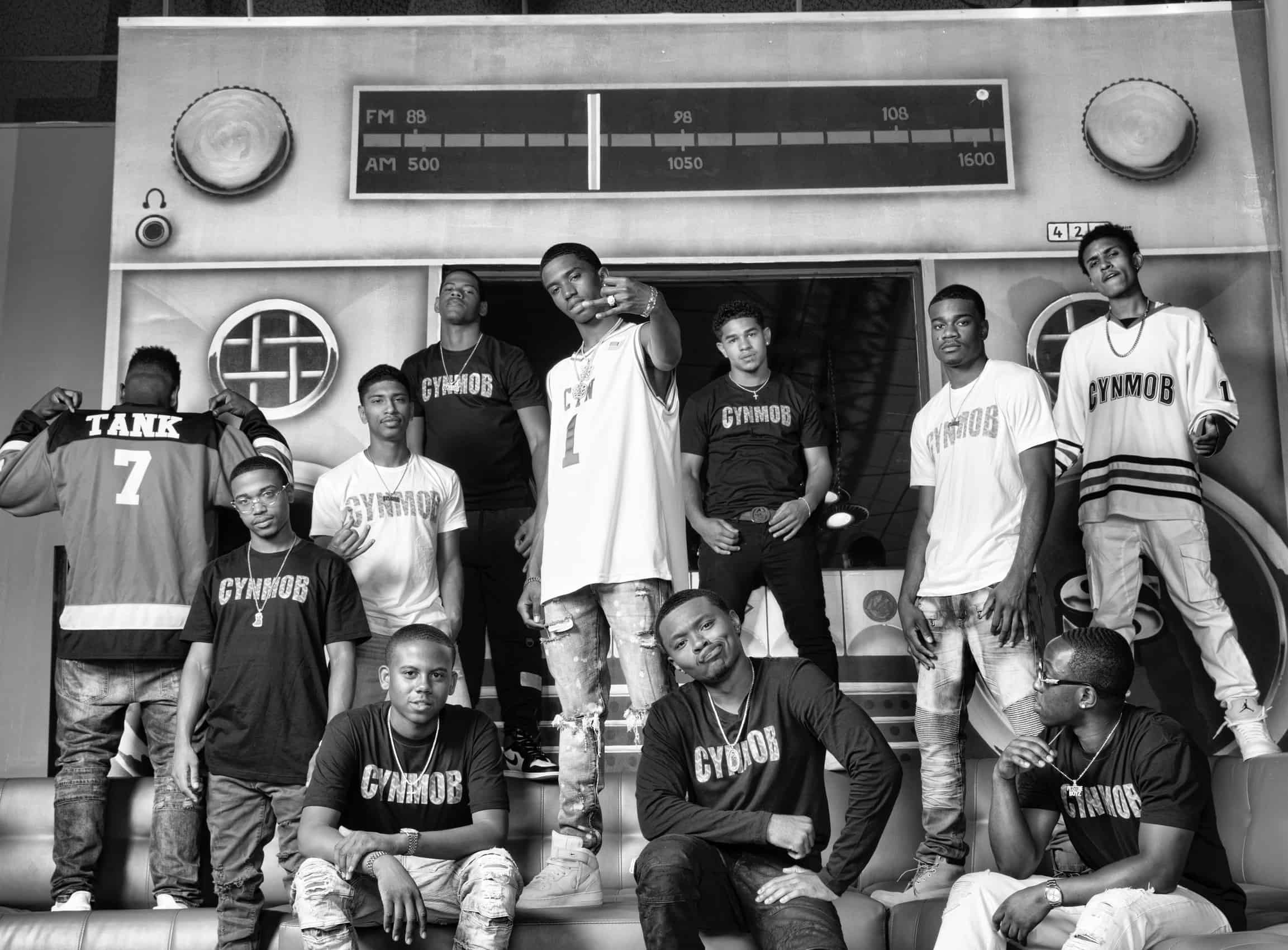 King Combs sounds a little fierce, but I’ve read that you’re more of a sensitive type. Are you really not a bad boy after all?
[Laughs] I am a bad boy, but I’m good, too!

Do you ever ask your dad for advice on music or do you like to surprise him?
I definitely ask him to make sure that I’m on the right track, and see how he feels. His opinion is so high, but there are times when I do disagree and stuff, too. Because I’m part of the younger generation and he’s a little disconnected from that. So, we are going to bump heads sometimes. That’s just natural.

What do you think the biggest misconception about being his son is? Do you feel like you have to actually fight harder in the music industry?
The big misconception is that I don’t have to go hard, or that everything will be handed to me. You gotta go harder just to prove yourself a little extra. Some people  may have one song that’s hot to get them lit. For me, it might take two or three just so people know, okay, he’s not playing around. It’s not a game. He’s actually coming with albums and heat. I A&R’d this project, got the producers and put it all together myself! 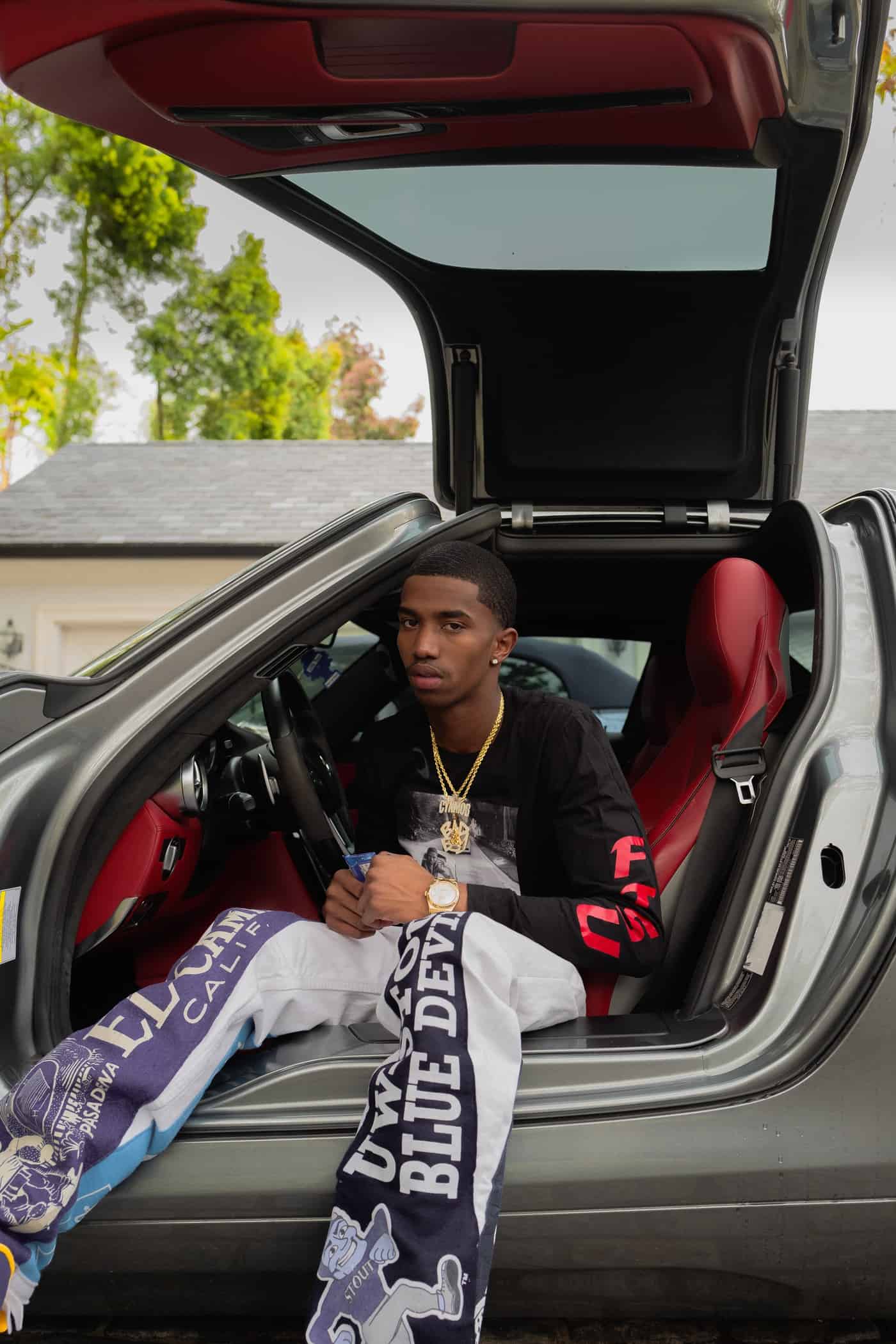 That’s really impressive! Do you ever see yourself working with your Dad or remaking one of his hit songs?
I definitely wouldn’t shy away from working with my pops doing a project, fully executive produced by him. I think the one I would remake is “Can’t You See,” with Total.

I can hear it now! Tell us how your sound and style differ from coast to coast. Let’s say you’re in New York top down on the West Side Highway…
I’m listening to “The West” by Free Greedo featuring Kai Cash. I have on a yellow New York fitted [baseball hat], white tee, my chains on, and some casual basketball shorts. Special edition King Combs shorts. It’s on fire! And Levi’s Denim Fours, all white.

What if you’re bumper to bumper on the 405 in California?
I’m listening to my song, “Birthday Suit.” I’m wearing an all-white suit. And I have Cartier lenses on. I’m just looking at myself through the rearview mirror, looking at the other cars behind me. Looking at my waves.

Speaking of fashion, rumor has it you’re doing a collaboration with Sean John and bringing it back to its roots. True?
Yes, I want to bring back that loose fit, track suit, the velour poppy colors — pink was my favorite! 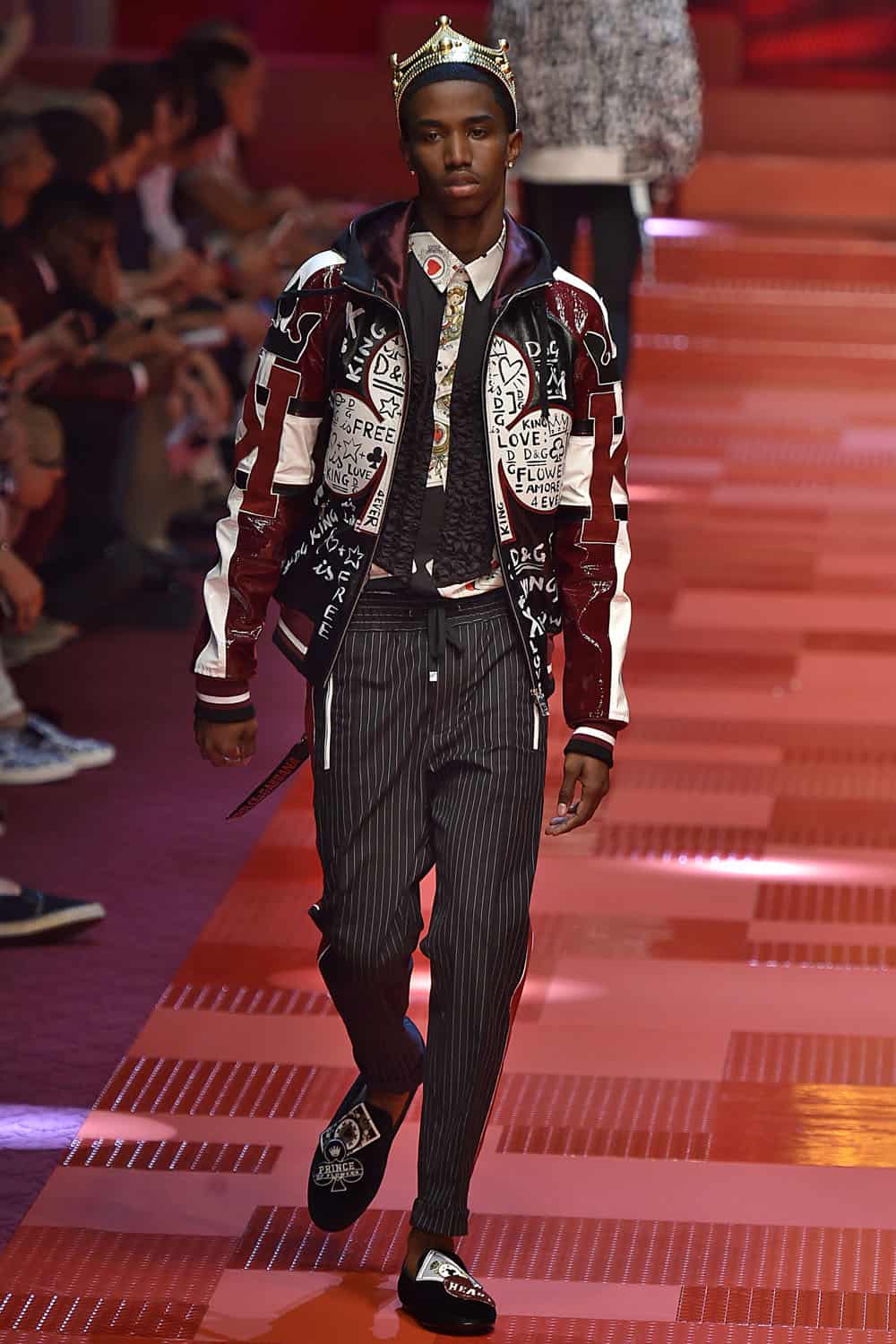 You’re also a model with IMG. What has been the most exciting moment so far in your fashion career?
The Dolce & Gabbana runway was incredible. It was really dope how they had the King theme. Fashion goes hand in hand with who I am. I’ve always seen Dolce & Gabbana as being such a high brand. I never thought I would be modeling for them and especially going to the Met Gala and how they gave me a crown to wear… that was lit! 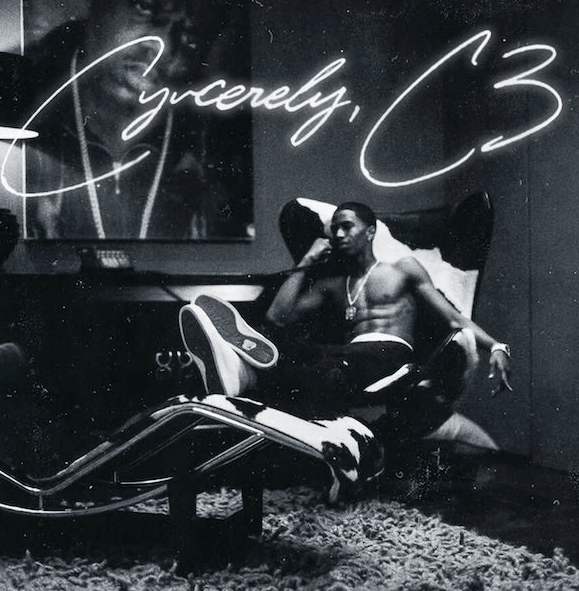 Stuart Vevers Questions If He Could Start A Fashion Career Today