Chic Sports! David Beckham Is Retiring From That Distracting Career 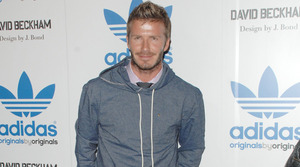 The sport world’s loss is our gain. David Beckham has announced that he’s retiring from his football career at the end of the season. “I owe everything to Victoria and the kids, who have given me the inspiration and support to play at the highest level for such a long period,” he said in a statement. Beck’s is estimated to be the richest sportsman in the UK raking in $46 million a year. Now he’ll have more time to concentrate on the brand of Beckham, which has always been a lot more fun than watching him kick a ball.

Victoria Beckham Kissing Her Family After Her...