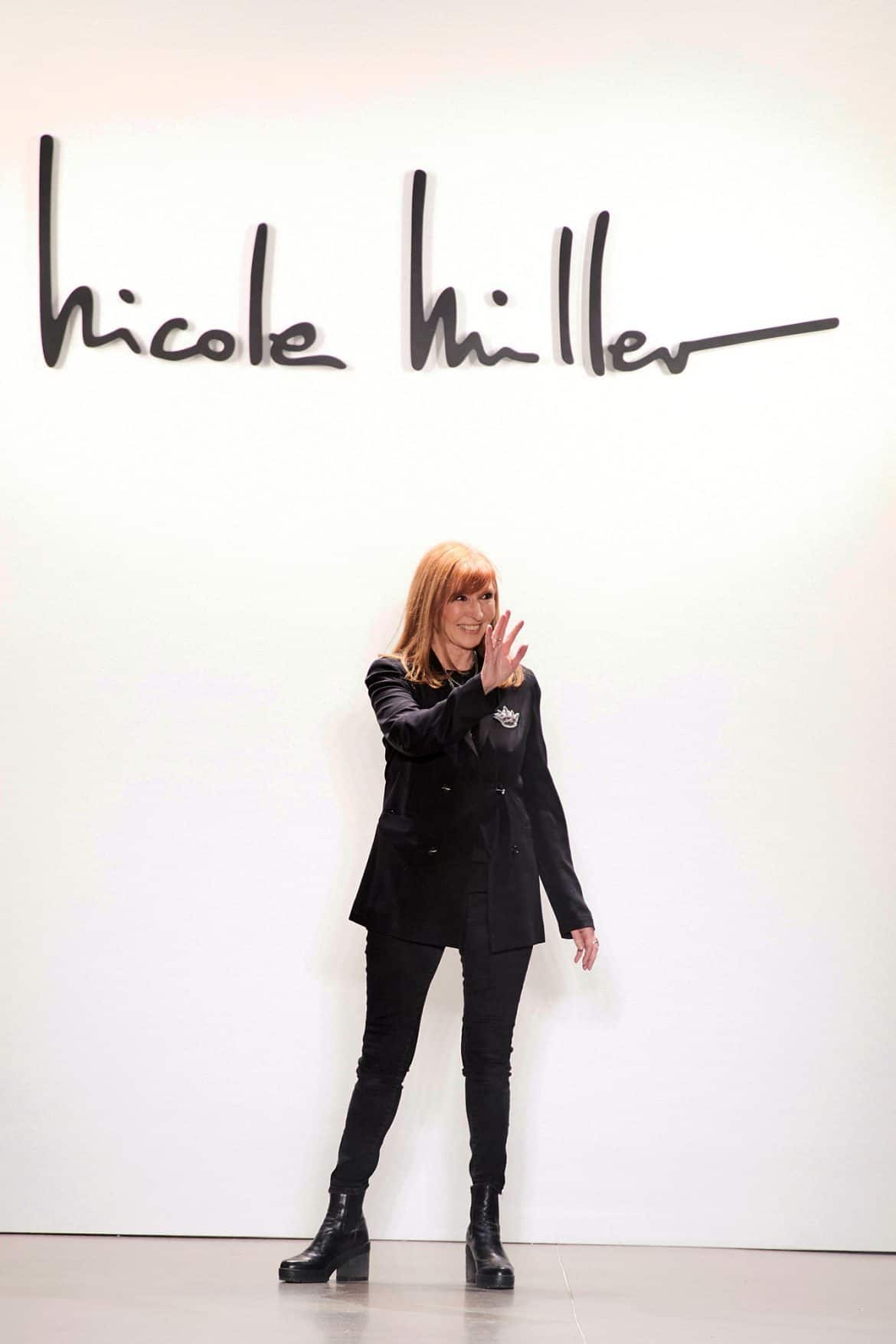 Designer NICOLE MILLER hasn’t been sitting around watching Netflix this year. The fashion icon has been busy working on an all-new expansion of her brand and producing her delicious rosé. She also has a rock-and-royalty-inspired collection out in stores now. We recently called Miller at her Sag Harbor abode to find out how she’s juggling it all and still finding a little time to wind down.

Is now a good time to talk?
It’s great! I’m on the porch doing a crossword puzzle.

We heard you do them. Are you good at them?
I’m not good on Friday. A Thursday I can handle. I do more of those Japanese number games.

You don’t seem like the type of person who likes sitting around in quarantine.
I went to the office nearly every week. I didn’t go five times a week, but I went three or four days a week sometimes. We were making masks, which I was making myself, and then I got the sewers to come in. Someone would drive them in. They’d pick up the cutwork on Monday and bring it back on Thursday. Eventually, we started making the masks in the factory. 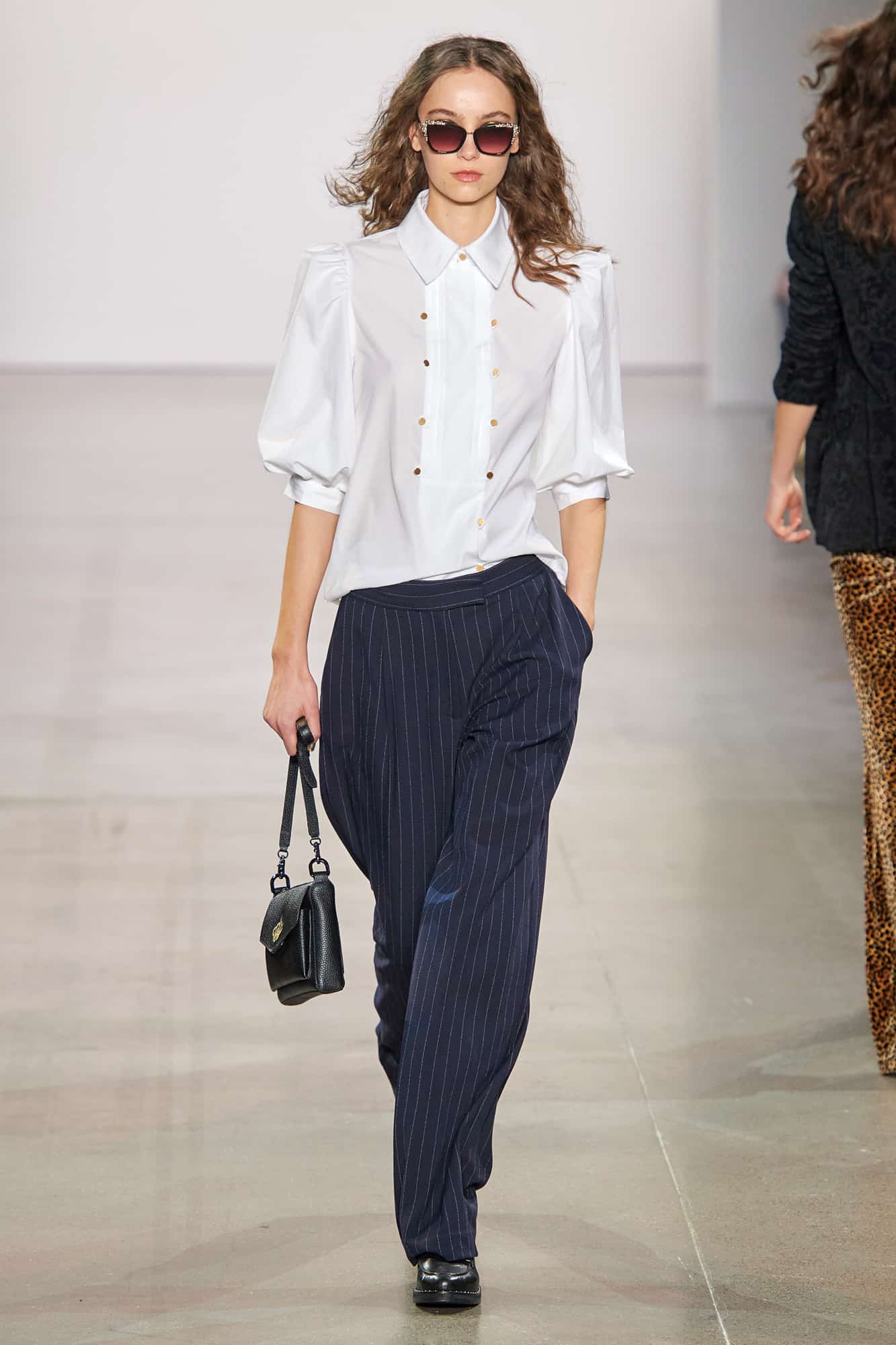 Did you make the masks from leftover material?
The first ones we did, and then I had a lot of cotton, so I made some in silk. I wasn’t sure at first if silk was a viable fabric, but I subsequently found out that it is for masks. A lot of people like it because it’s a lighter weight and you can put the filter in if you want.

Did you enjoy the process?
It gave us something to do, and it was something to sell. It brought a lot of new people to our website. We imported a lot of the surgical masks from China, which we ended up donating to hospitals. We would donate a percentage of the ones we made as well.

You have a casual collection coming out this fall. Was it inspired by people working from home?
We were starting it anyway, so it was good timing on our part. It’s an activewear collection. I feel like style-wise everybody has gotten more casual anyway. Everyone is into yoga and wellness and all these things, and then coincidentally timed with people not being able to go to parties. It was good that we had gotten this together well in advance and got it going. It’s also opened up a lot of new stores for us, too! This isn’t going to go away because people are into fitness. We were known for party dresses more than anything, though I’ve done a lot of other things in my career. Everything is timing. But it could have been started a lot sooner, to be honest! 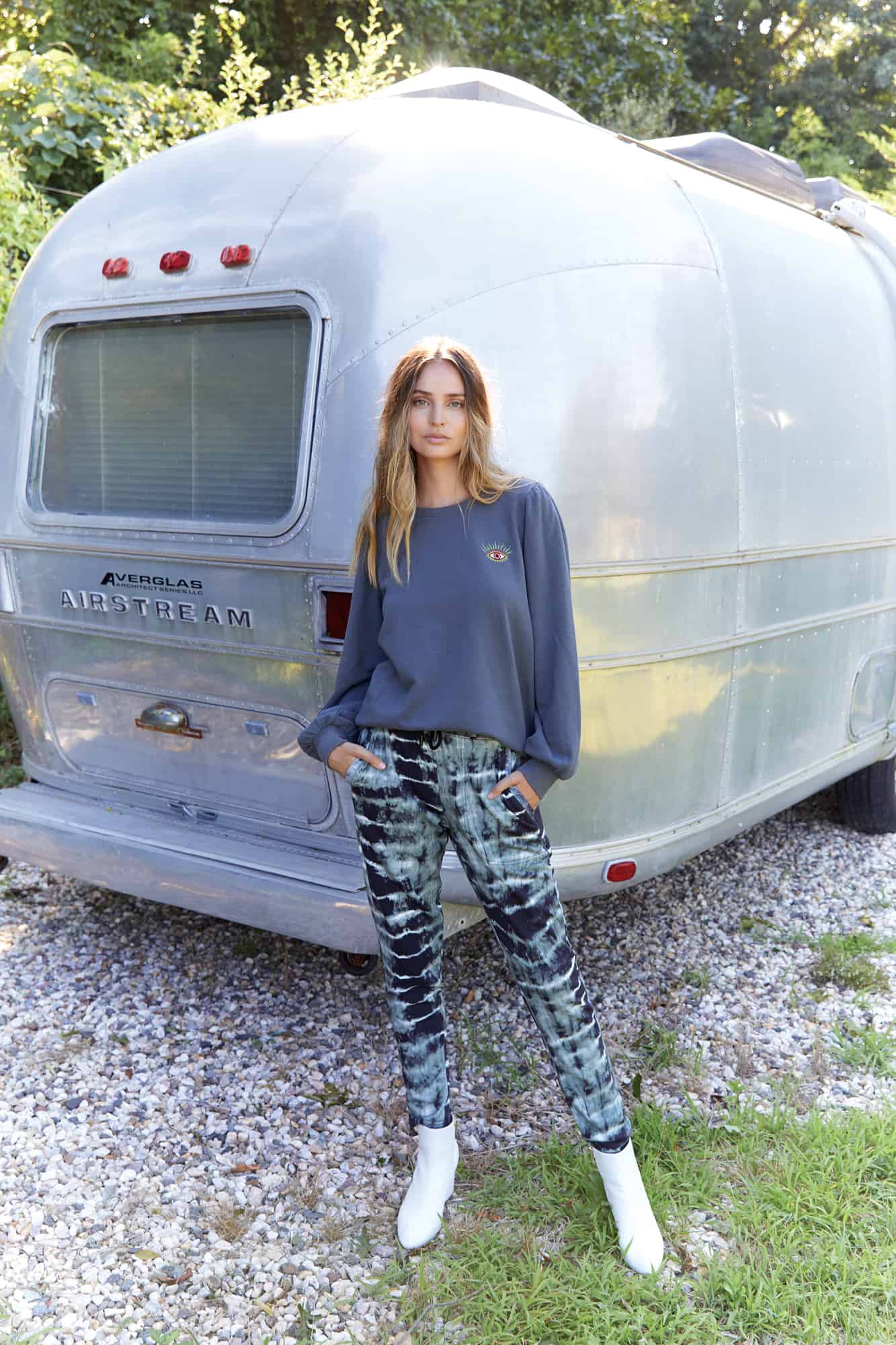 What’s in the collection?
It’s leggings. It’s a lot of our prints. It incorporates the evil eye, which has become a signature thing for me and has become so successful. There are sweatshirts; there are some elements that we did from our Fall Rock ’n’ Royalty collection.
We used inspirations from the collection for all these things.

Tell us about the Rock ’n’ Royalty line.
I was inspired because the royals kept being in the press for a lot of reasons. I was thinking of rebellious royals. Between Meghan and Harry and Prince Andrew, it reminded me of royals behaving badly and England and rock ’n’ roll. There are a lot of regal-looking prints. We styled it more rock ’n’ roll with leather and T-shirts. There’s a Maid Marian dress, and we put a leather jacket over it.

Was production on time for the collection?
The Chinese factories came back on board pretty quickly, but we certainly had to cut back on quantities of things because a lot of stores have cut back. We produced the whole Fall collection, though.

Let’s talk about your delicious rosé.
It’s made in Bordeaux. It’s organic. It’s also vegan, which a lot of people don’t realize that wine is not vegan. The wine is created at Château Auguste. It’s a blend of merlot, cabernet sauvignon, and cabernet franc grapes. It’s in the Hamptons at Le Bilboquet, Dopo la Spiaggia, and Cavaniola’s cheese shop. 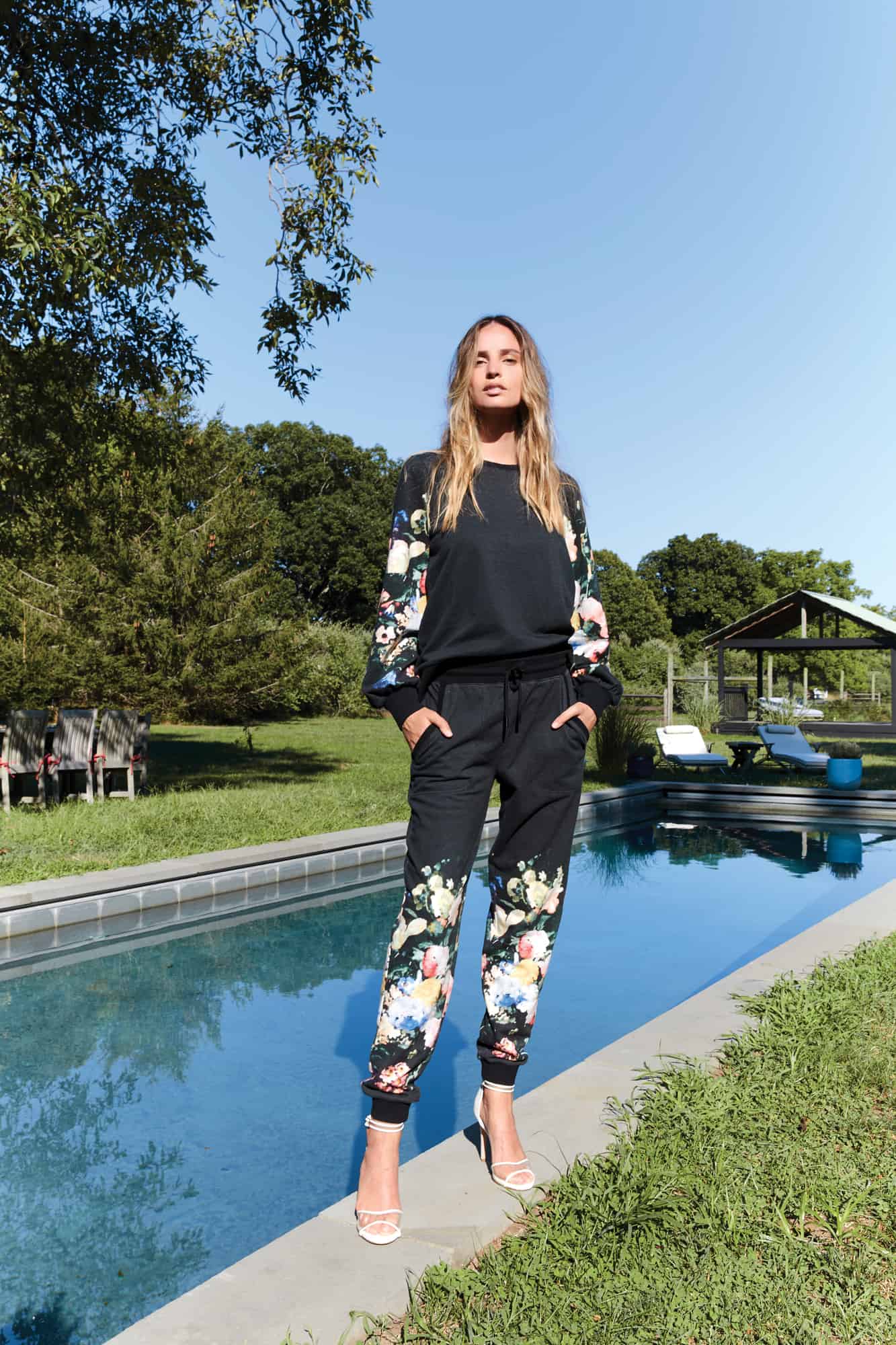 How did the idea of doing a wine even come to you?
I’m half French, and I have all these French friends! I was having a conversation with one of my French friends who said, “Nicole, we will make you a rosé.” Of course, he said it in French. I like the fact that it’s from Bordeaux and not from Provence. It makes the wine stand apart.

Has this been one of the more fun projects?
For sure! It reminds me back when ties were big, and we were always doing ties for these liquor companies. We did things for Veuve Clicquot, Stoli Vodka, Seagram’s, just about every brand! It was such a fun moment in time, and I kind of missed that. The rosé was fun because it felt like being back in the liquor business again. Because of COVID-19, a lot of people who I used to do ties for want masks with the old tie prints. It’s come full circle. I’m working on something for Wine Enthusiast.

What are your plans for New York Fashion Week this year?
I think everyone was freaked out and intimidated, then we see these videos from Europe that everyone is complaining about. Most people are going to treat the season like it’s a Resort season or Pre-Fall. I think most people are not going to do presentations, and some people are going to do video, but I think people will shoot their looks on models in a space and submit the pictures and do interviews. I think everyone will look at it like they missed the fashion show, but they’ll see pictures the next day.

The digital presentations were a bit of a bust.
They’re always moody! I hate moody videos. I’ve seen a couple that look fun, but the esoteric stuff is not what anybody needs right now.

Have you been spending a lot of time out in the Hamptons?
Weekends! People say, “Want to have lunch today?” And I’m in the office. I’m here Friday, Saturday, and Sunday. Last year, we would come out on Friday, but now we’re coming out on Thursday and everyone can work from home on Friday. 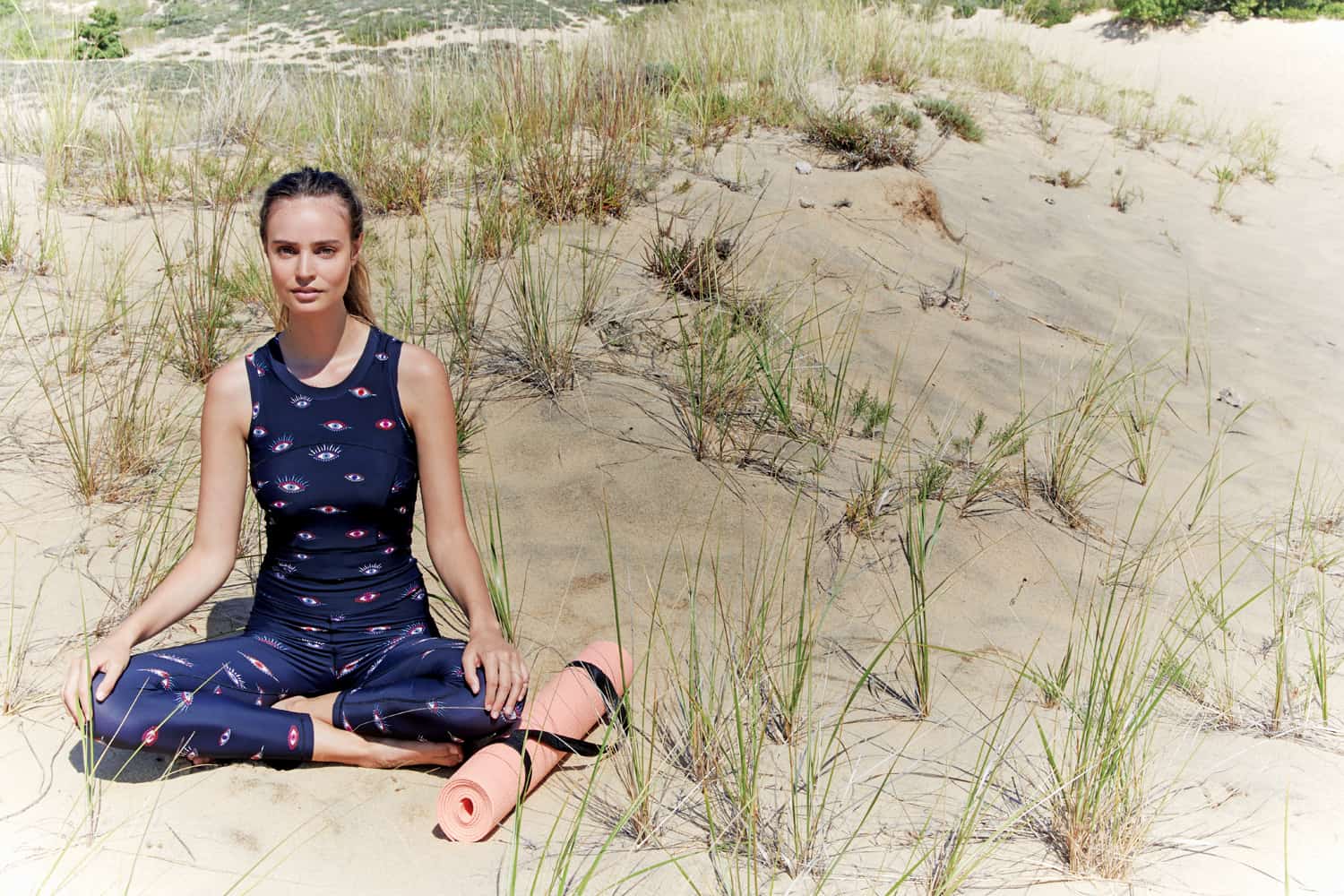 Have you been eating out?
Yes! Le Bilboquet, Dopo la Spiaggia, and Duryea’s Lobster Deck. Tomorrow I’m going to try the new Duryea’s in Orient Point.

When it feels safe to travel again, where do you want to go first?
St. Barth’s! We’re going to go to Aspen for Christmas. My husband said if we go to Aspen that we’re eating in the condo or wherever we stay. He said we’re not going to restaurants, but I said, “Ewww, that doesn’t sound like much fun!” We only eat at restaurants. Aspen has been in great shape. We’ll see how it goes at the end of the year.
Subscribe to our newsletter and follow us on Facebook and Instagram to stay up to date on all the latest fashion news and juicy industry gossip.

Art Is Hope: Why Zadig & Voltaire is Collaborating with Emerging Creatives