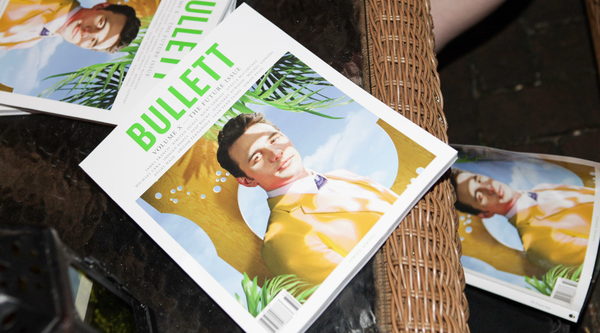 (NEW YORK) BULLETT magazine recently announced that they would not be publishing the Fall issue of their fashion and art quarterly this year and would be focusing on digital. The news comes on the heels of recent reports that subscriptions and newsstands sales for physical magazines are down across the board for even the largest print publications with many boasting increased digital subscriptions. The three-year-old mag, helmed by editor-in-chief Idil Tabanca, has been known to score major cover names like Jeff Bridges, James Franco, Pharell Williams, Elizabeth Olsen, and Elle Fanning, as well as contributors like Lake Bell and Riff Raff.

Another recent development at the title? The magazine’s VP of business development, Noah Wunsch, has left the publication. Wunsch left for a career change to pursue editorial interests with a startup. “Noah’s a bright guy and we’re happy for him,” said chief strategy officer, Jack Becht, to The Daily. “He will be missed!”

Despite the news, BULLETT Media has plenty in the works. So, what’s on tap? An expansion of their website, which already sees 1 million page views per month, plus, a new B2B creative agency, called BULLETT Creative Agency (BCA), and a redesign of their e-commerce section, The BULLETT Shop, with 200 new products launching next week. What’s more? According to Becht, they’ve “allocated a substantial increase in resources” to their award winning monthly tablet publication, Bullett Interactive.

Also, they’ve been hosting a series with Adobe, where they eductate industry leaders, agencies, and corporate partners on digital platforms. “We’ve hosted several lunch and learn sessions with the top execs of Newscorp, led panels at Adobe’s digital summit, held agency wide presentation with the PHD staff under Omnicom, and are generally pioneering the industry of interactive tablet design,” said Becht. “BULLETT is a looking glass; a cultural conduit by which we deliver an observation of modern society.” As far as the modern publishing grind goes, all signs point to digital increasingly being a focus for those looking to stay afloat.