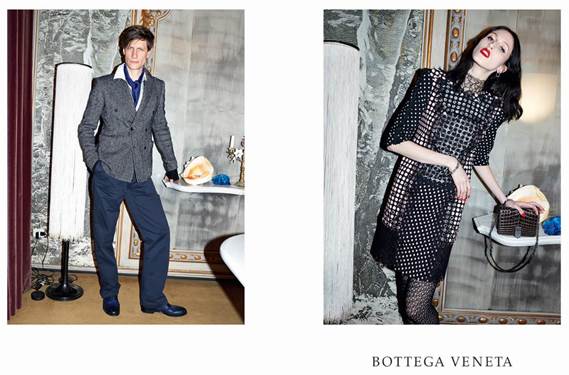 Bottega Veneta has debuted its Fall 2015 collection featuring Anna Cleveland and Freddy Drabble, shot by Juergen Teller. The campaign was shot at the former home of Carlo Mollino, one of Italy’s most influential mid-20th century designers.”I am very happy with how Juergen Teller turned his eye to capture a distinctive and sophisticated angle,” said creative director Tomas Maier in a press statement. “He managed to interpret the mood of the collection into powerful effect.”

Maier is known for his penchant for art, and the campaign will be included in Bottega Veneta: Art of Collaboration, a book that features the luxury brand’s campaign imagery since 2002. Previous campaign collaborations include Nobuyoshi Araki, Nan Goldin, Philip-Lorca diCorcia, Pieter Hugo, Peter Lindbergh, and Robert Longo. The book will be published in October. In the meantime, check out the moody film below of Cleveland and Drabble that will accompany the print images.