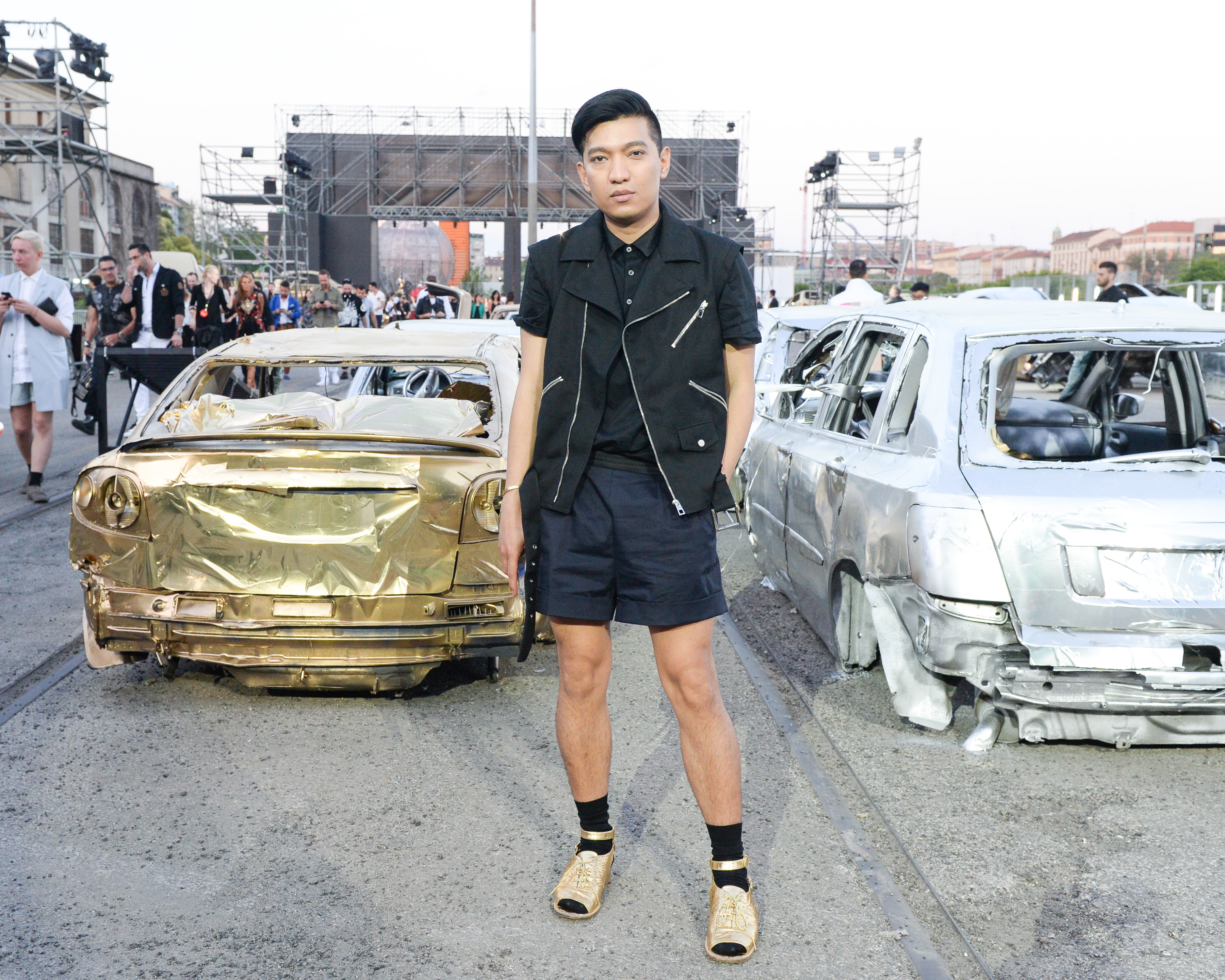 Bryan Grey Yambao, known to the globe as Bryanboy, has been a force in the blogosphere since launching his site more than a decade ago. He’s gone from posting pics from his native Philippines to being chased by shutterbugs at fashion weeks around the globe, deeming him an “Internet celeb.” We chatted with the never-shy and fashion risk taker below…

When did you start your blog?
I started my site as a travel journal in 2004. That’s 11 years ago. Before that I was a freelance Web designer. Man, I’m ancient!
How do you describe your style?
Eclectic and ever-changing.
Who was the first designer who helped you?
Marc Jacobs! He named a bag after me.
Are you friends with any designers personally?
Unfortunately, yes.
Who are your top list of fashion pals?
Well, all of my pals are in fashion, so I can’t possibly pick and choose who the best ones are … otherwise they’d snatch my weave when I’m asleep!
Have you splurged on anything lately?
Yeah, health insurance. I also want to get a nose job, but the doctor told me I need to stop smoking, stop drinking coffee, tea, and alcohol 60 days before the surgery and 60 days after the surgery. So f*ck that. Saved me a ton of money.
What’s been one of the most extravagant moments of your career?
Not exactly extravagant, but there was a time when Rihanna saw me at a Chanel show a few seasons ago. She stood up, told her bodyguards to pave way for me, she came up, held my sweaty face with her hands, and kissed me on my cheek.
What’s something we’d be surprised to learn about you?
I’m a morning person. I like to wake up at 5:30 a.m. Half of my hair is gray. I have heart disease. I’m drug-free, with the exception of this pill called metropolol that I have to take once a day to manage my high blood pressure.
How many times a day do you check Instagram?
At least once every two or three hours, about four or five times a day.
Is Instagram or Twitter better for your audience?
Definitely Twitter, especially for entertainment value.
Has your Twitter account ever gotten you in trouble?
A few times. I always say what I think instead of thinking before speaking. I’m also dangerous after five glasses of wine. Someone needs to remind me to turn my phone off in order for me not to get into trouble.
What magazines are you obsessed with?
Industrie, System, Tank, US Weekly, and Elle Collections UK.
Did magazine editors ever criticize you?
Probably behind my back. Definitely not to my face.
Are you still living in the Financial District?
Yeah, I keep an apartment a block from the World Trade Center but I’m rarely there. I just see it as a storage facility for clothes. I travel so much, it’s ridiculous. My fiancé lives in Sweden and we both got a new place in Stockholm earlier this year, so I’ve been spending a lot of time in Europe. We’re getting married after doing long distance for five years.
Congrats! Are your friends surprised that’s your neighborhood?
Not really. I like it down there. Financial District is very civilized and very quiet. I’m 33. I’m old! I eat a lot. I don’t exercise. I have back problems. I can’t live in a walkup building. I need my space, I need elevators, I need high ceilings.
What’s the fashion like down there?
Who needs fashion when my ‘hood mostly consists of hot bankers from Goldman Sachs or Tribeca moms in yoga pants pushing their prams? No time to look at clothes.
Speaking of clothes … What’s your favorite show during Fashion Week?
I don’t really have a favorite!
What was the first show you went to?
Marjan Pejoski in London back in 2000.
Would you still go to a show if you were seated in the second row?
Of course. I’m there to see the clothes, not to be photographed sitting in the front row. I’ve gone to shows when they gave me standing. Yes, standing! All these basic bitches.
What’s your ultimate goal?
To have a dog and adopt two daughters.

my daughter wants her ears piecred so badly!! she just turned 10, so i guess she’s old enough to take care of them! oh the bachellorette? i don’t care for jeff, and i’m not sure that i really even “like” any of them. not a one of them is as cute as brad was….i don’t know. maybe one of them will grow on me!