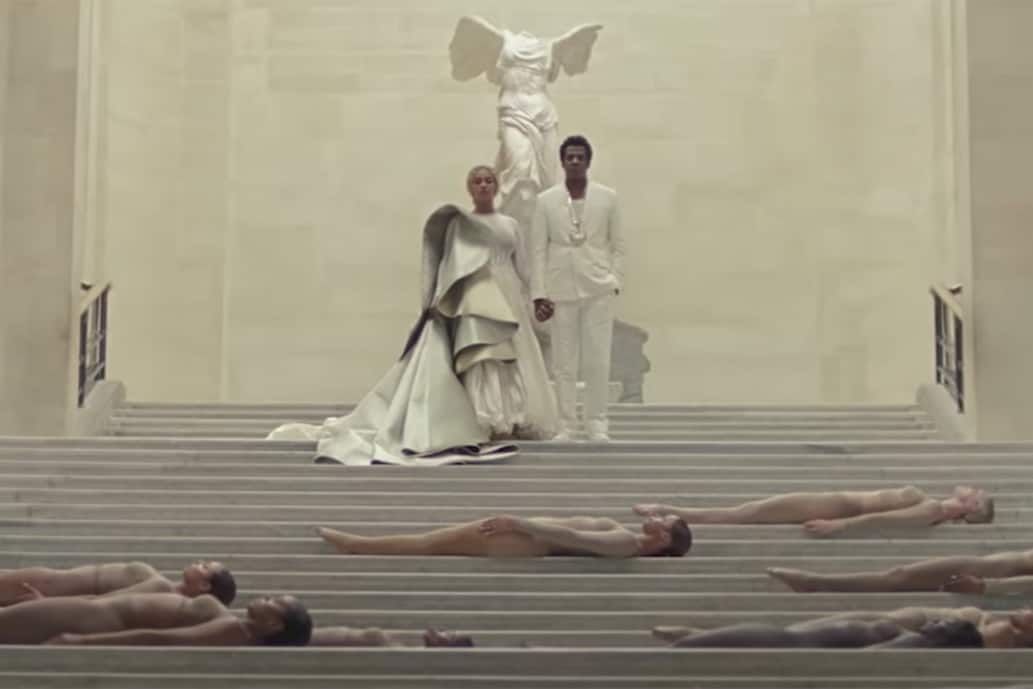 Queen Bey has proven to us all, yet again, we cannot bow down enough.

In a surprise reveal on Saturday night, Beyoncé and Jay-Z dropped a joint nine-track album titled “Everything Is Love.” The Internet was shook, then shook again with the release of a high-octane music video for the album’s single “Apes*it.” The video was filmed in the Louvre, naturally. And even Leonardo Di Vinci’s Mona Lisa couldn’t outshine Bey. The backdrop became most ambient (and, let’s just say it, irrelevant) when B stepped out in a white haute couture dress by Stéphane Rolland. The look was topped with a sculptural ruffle cape from Alexis Mabille haute couture, cascading over Bey’s right shoulder.  The couple stands stoically in front of The Winged Victory of Samothrace, a statue of the victory goddess Nike, created around 190 BC. Then later Bey dances wildly in the look, kind of going, well, apeshit.

The video shows virtually every gallery in the iconic museum. Beyoncé and Jay-Z reportedly only gave the Louvre staff a month’s notice before filming. “Beyoncé and Jay-Z visited the Louvre four times in the last ten years,” the Louvre staff said in a statement. “During their last visit in May 2018, they explained their idea of filming. The deadlines were very tight but the Louvre was quickly convinced because the synopsis showed a real attachment to the museum and its beloved artworks.” The couple is currently touring, having just kicked off their “On The Run II” tour on June 6. The global concert jaunt will wrap up this October.

It’s worth noting they dropped the album under a new, unified moniker: The Carters. The lyrics to the single seem to be celebratory, to note how on track the couple is in the aftermath of alleged infidelity (see “Lemonade”). In “Apes*it,” Beyoncé repetitively chants “I can’t believe we made it.” She also lists some of the perks of being Mrs. Carter such as buying her husband a jet and “shutting down Colette”.

And the Louvre. That too.