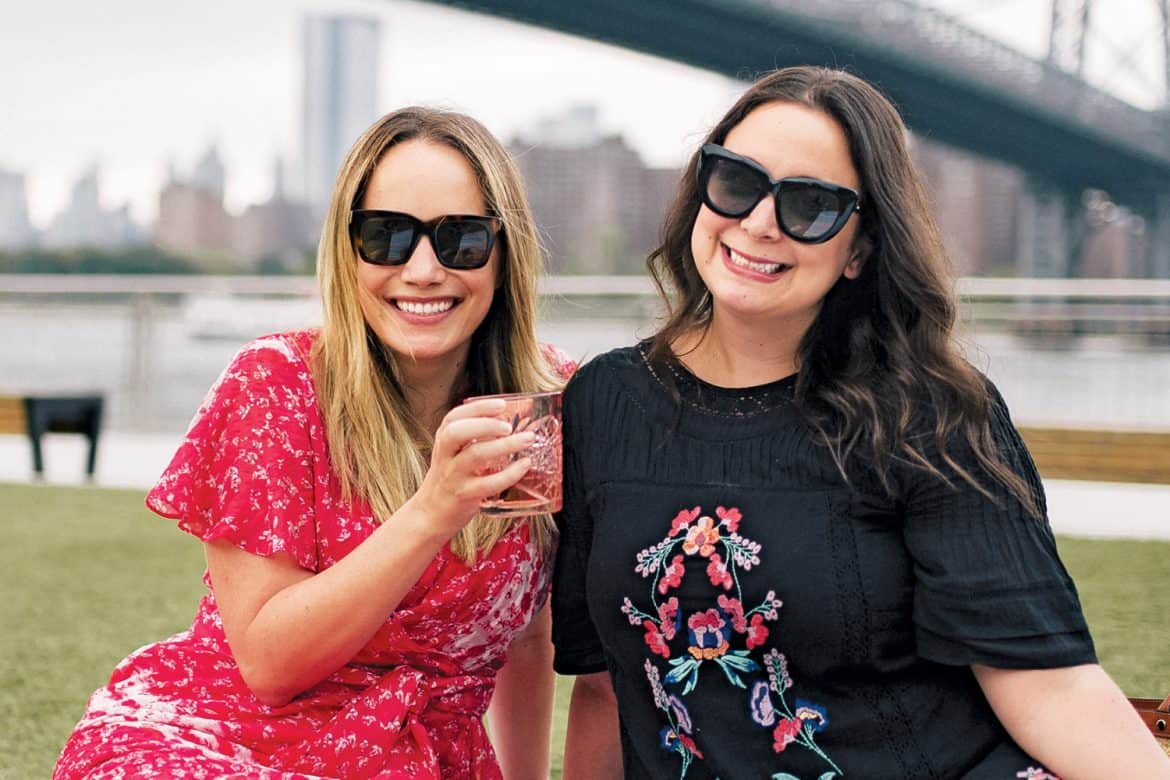 Grace Atwood and Becca Freeman launched their podcast, Bad on Paper, a little over a year ago. In that short time, their book-centric show has grown to include notable guests, and even a live tour. The duo — who clearly have the gift of gab — chatted with The Daily Summer about all the fun they’ve been having behind the microphone.

We heard a rumor that you guys didn’t like each other when you first met…
Grace Atwood: We were both working at BaubleBar. I met Becca and I thought she was mean and bossy. Cut to three months later and we became really close friends — to the point that we had to be separated. We were too disruptive sitting together!

Becca Freeman: In her defense, I am mean and bossy. And now she can’t get rid of me!

What inspired you to team up for a podcast?
Atwood: I’ve had my blog for almost 10 years. Podcasts were the next big thing and I wanted to start one. But doing a podcast by myself would be boring, so I asked Becca to do it with me. We decided to start it around books because we are both big readers.

Which genres do you gravitate toward?
Freeman: We thought we had the same taste in books, but through hosting the podcast we’ve realized that we actually don’t. That makes it more interesting. I gravitate toward romantic comedies or teen high school dramas. One place we come to together is dystopian young adult fiction. If there are unsupervised young adults, especially if they’re rich, we are very into that.

Atwood: I love any Gone Girl rip-off. Any murder-y killer where “girl,” “wife,” or “woman” is in the title, you got me. 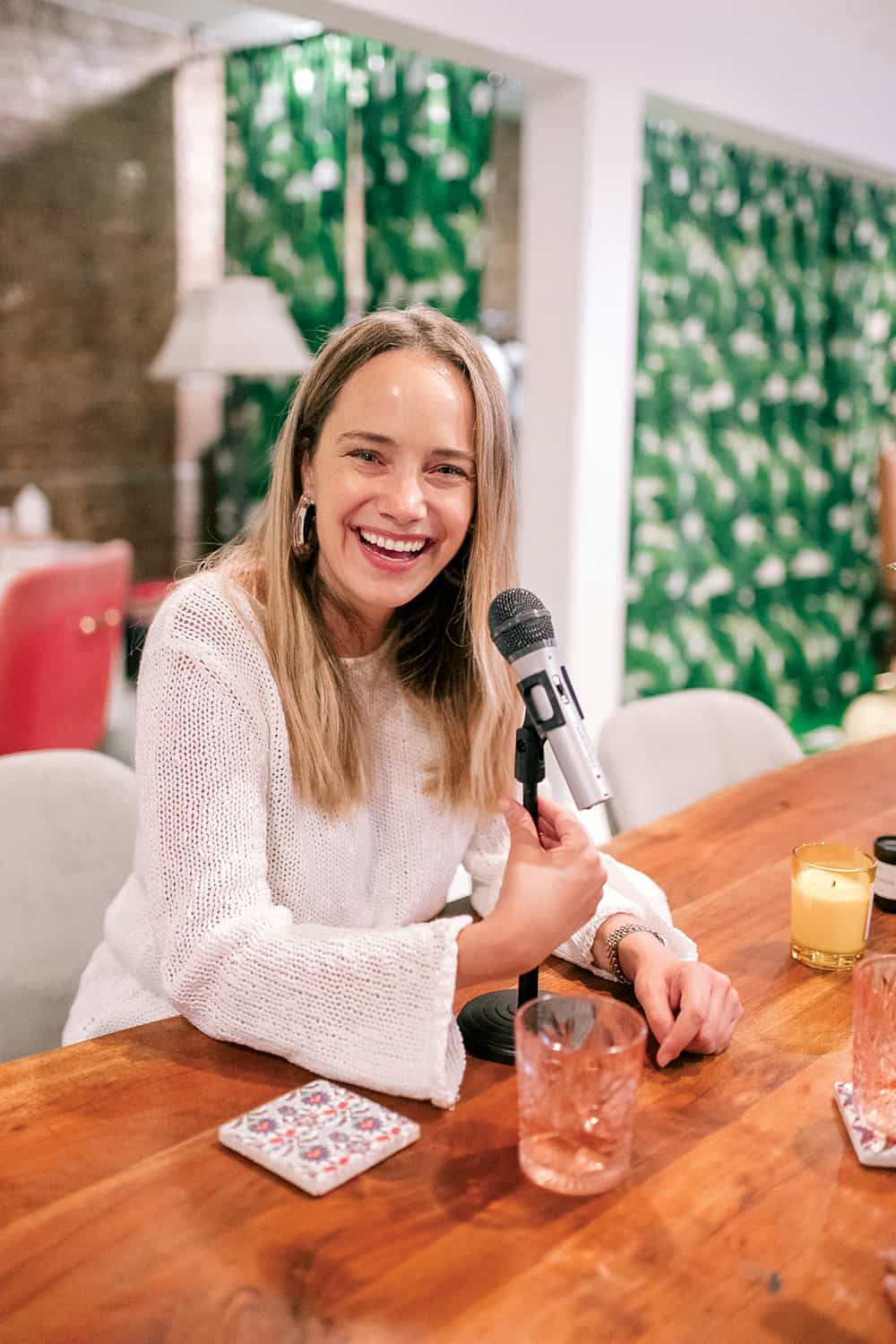 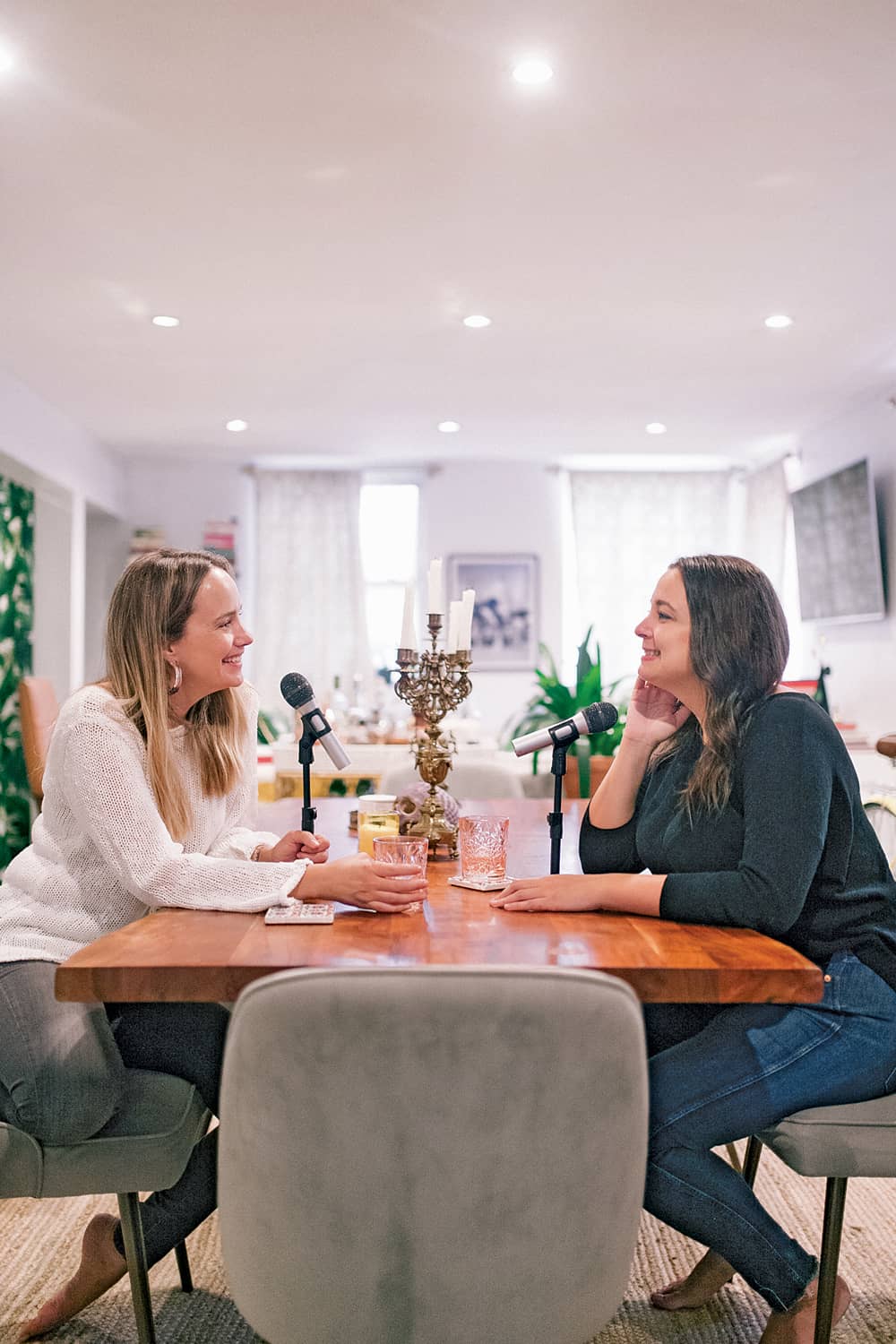 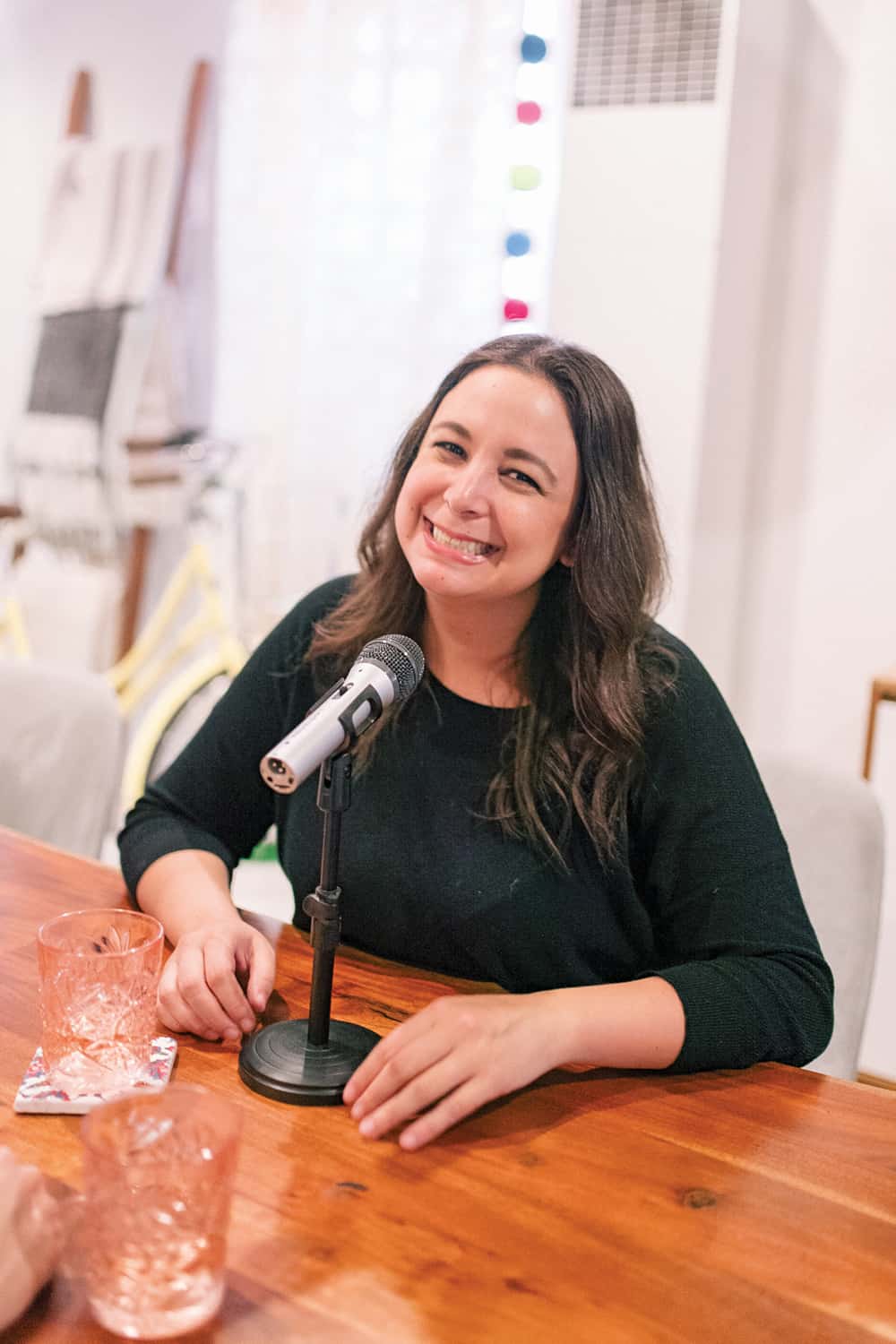 What is it about YA fiction that is so captivating to adults?
Atwood: It’s a really nice vacation, especially given the current political climate and everything going on in the world. It’s nice to read something that is totally implausible, maybe a little bit poorly written but fun. It’s like brain candy.

Freeman: As you get older, people’s adult experiences diverge more, so there’s less commonality. But everyone went to high school, everyone understands the five basic cliques. It’s such a common experience. It appeals to everyone in some way because it’s nostalgic.

How much do you spend on books monthly?
Freeman: Since doing the podcast, we’ve had more books sent to us. I also get a lot of books sent to me that I don’t want to read. In general, I read about five or six books a month. If you multiply that by $10, that’s probably $60. And that’s not counting the books I buy and don’t read.

Atwood: I’m in the same boat. Last month I read eight books. We definitely have spent too much money.

Becca, have you ever put yourself out there like this before?
Freeman: Not really. I’ve been on the brand side of marketing my whole career. I was the head of marketing at [feminine-care brand] LOLA, so I knew about podcasts from the branding side. I had dabbled in the Internet before but never anything this big. I didn’t have huge expectations. I thought this would be a hobby — something fun. I wasn’t thinking about it in a strategic way like, “This could become my job someday.”

What were some of the early challenges?
Freeman: We originally launched the podcast with a different name and didn’t realize until the night we were uploading it that there was another podcast with the same name. They didn’t really have any [online] presence. We figured naively that if there was an issue Apple wouldn’t approve our podcast. So when they did, we were like, “It’s fine!” Three months in, we ran into a scuffle with the other podcast, so we needed to change our name. Looking back, we’re glad we did because we love the new name so much more. It was a blessing in disguise.

What’s the vibe of your recording sessions?
Freeman: We often record it in our sweatpants in Grace’s apartment at her dining room table.

Atwood: We always have seltzer. If it’s a weekend or we’re recording at night, we have tequila. We are also trying to be better hosts and have snacks. When we have guests, we record in my living room so it feels like a comfortable casual conversation. Becca is secretly hoping to become a seltzer influencer.

Freeman: It’s my only hope and dream.

Atwood: That and having Dunkin’ Donuts sponsor us. 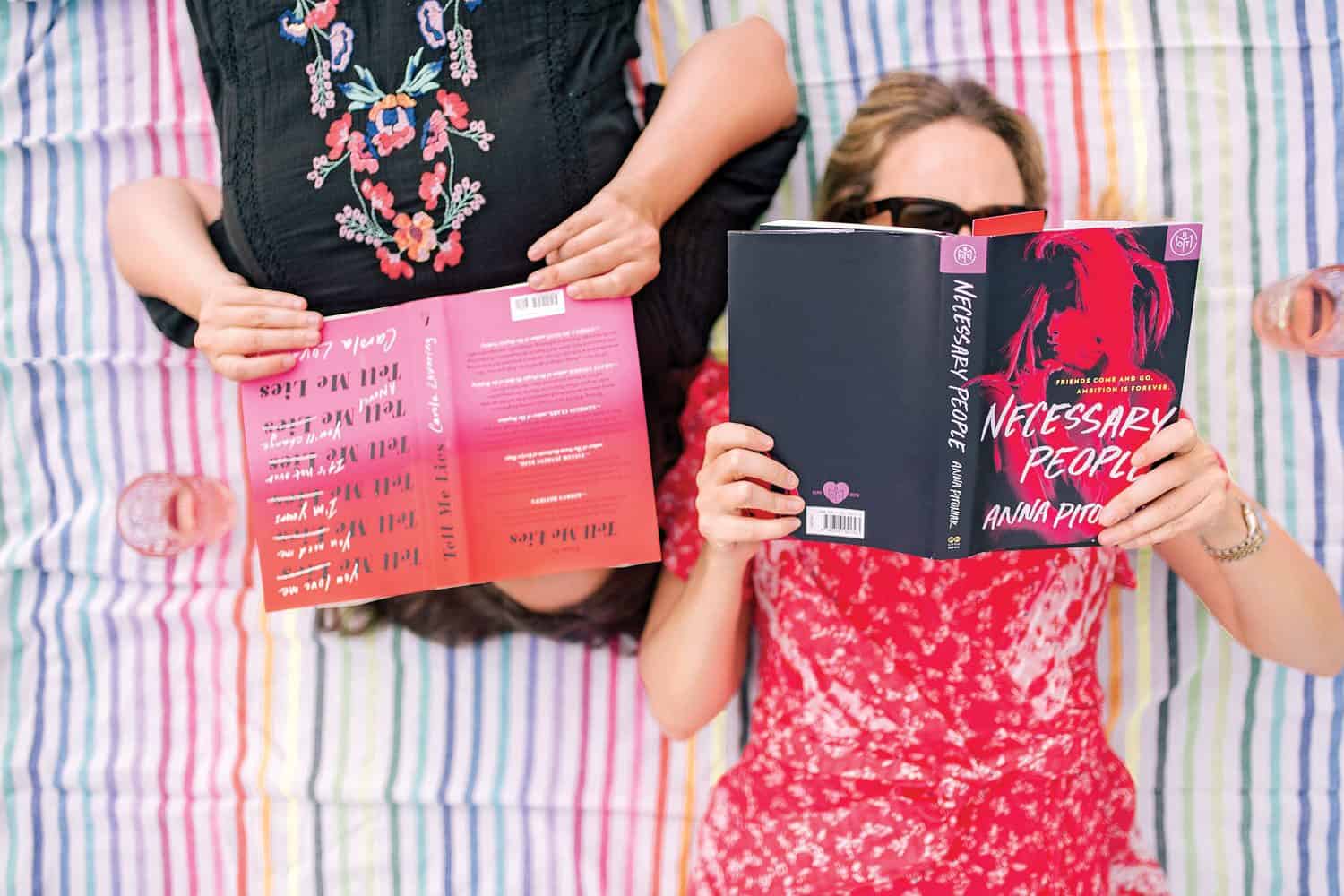 Freeman: Medium French vanilla coffee with cream and one sugar.

You talk about much more than books on the show. Did you plan to expand to cover different subjects?
Atwood: No. It was out of necessity — we thought about the maximum number of books we could read and settled on two a month. Then we decided to give advice in between. We weren’t being strategic at all. This winter, we got burnt out. Reading two books and coming up with discussion points every month was a lot of work. So we decided to bring on guests. That’s where we saw the podcast really grow. We got exposure to their audiences.

Who have you featured on the show?
Freeman: Our first guest was Katie Sturino, who is a friend of ours. We had her on to talk about body positivity. We had Blair Eadie from Atlantic-Pacific and influencer Chinae Alexander — people who are in our network.

Have you been surprised by anyone who has agreed to join you?
Freeman: One night we had a little too much to drink and we were spit-balling dream guests. We DM’d Alyssa Mastromonaco, who was President Obama’s deputy chief of staff. We were like, “Would you ever want to be on our podcast?” and she wrote back immediately, “Sure! Sounds fun.” It’s been so fun to reach out to amazing women and actually having a conversation with them, and becoming friends. We’ve also had Kathryn Gallagher, the actress from You.

How do you plan out each episode?
Atwood: We make a rough outline before every single episode so that we have our talking points. But we don’t want the conversation to feel rehearsed or practiced.

Freeman: When we have guests on, we crowd source the questions from our audience. They get to ask questions of people they wouldn’t otherwise be having a conversation with. Sometimes it’s very particular — they have a career situation or a dating scenario. It’s a cool way we can create content that involves our audience.

What makes for a really good guest conversation?
Atwood: It’s important that the guest be honest. When our guests are willing to be completely open and not give generic advice, that’s when the episode is most successful.

You recently went on tour. What’s it like to do an episode in front of a live audience?
Atwood: Shocking. We never thought this was going to happen. What is also surprising is that we really like it. I’m an introvert. I don’t love crowds or big groups. Being on stage is a totally different element.

Freeman: Doing it in person is so cool because you see people nodding along when they agree with you or even when they disagree with you and somebody is yelling. You get that reaction. It’s really interesting.

What other feedback have you received from your audience?
Freeman: The No. 1 thing we hear is that they feel like we are [their] best friends. That’s because we try to be really honest and truthful. It feels like you’re having a glass of wine with your girlfriends. There’s a lot of women who maybe don’t live near their friends or have children. It’s their girl time. They might be missing it in their real life and they tune into it in the car on their commute.

Takeaways from the live shows?
Atwood: Each audience is so different. In D.C. we realized that we had big readers. So we learn about each market; it’s fun to expand on different concepts. Next time we’ll do even more book talk when we get to D.C.

Freeman: Each show is different because we have different guests. Lastly, we have a panel. On this past tour, we’ve been gearing it around female friendship. Everything is really formed by our guests’ experiences. So even though every show has a formula about friendship, what comes out each time is really different.

What’s next for you two?
Atwood: We’re working on planning a really big fall tour.

Freeman: As we’ve done shows, it brings people out of the woodwork to ask us to come to different cities. Part of the fall tour is going to the ones, especially on the West Coast, that we didn’t hit this time around.

The Daily Summer Fêtes the Hamptons’ Most...

New Podcast Alert: What Do You Believe?