Arthur Ortenberg Passed Away At Age 87 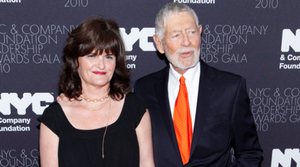 (NEW YORK) On the heels of Cathy Horyn‘s retirement from The New York Times last week after 15 years as the paper’s fashion critic, to take care of her ailing partner, Arthur Ortenberg, it was announced today that the former founder and vice chairman of Liz Claiborne Inc. has passed away at the age of 87. The fashion industry was initially shocked over Horyn’s resignation just a week before NYFW.

Horyn’s former colleague, Eric Wilson, fashion news director of InStyle, told The Daily today, “I’m deeply sorry for Cathy’s loss. Art was an extraordinary person, an environmentalist, a philanthropist and a businessman, and I was truly blessed to have had the opportunity to know him well, and then also to know Cathy and Art as a team.” Wilson spent almost nine years working with Horyn at The New York Times before decamping last year to InStyle. “She’s an amazing colleague and great friend, and we certainly had a fantastic time working together for all those years. She’s just as insightful and to the point off the page as she is on,” said Wilson. “I’ll miss reading her high-minded approach to fashion in the paper and her ability to articulate the merits or weaknesses of a collection before I even had time to get back to the car.”

Ortenberg started Liz Claiborne, Inc. with his wife, Liz Claiborne, in 1976. By the time they retired, the publicly-traded firm was making $110.3 million in net profits. Ortenberg will also be remembered for the millions in philanthropic funding to wildlife conservation that he distributed through the Liz Claiborne Art Ortenberg Foundation.

A Dose Of Seventies Chic With Lindsey Wixson And ManiaMania

Vanity Fair Celebrates The 20th Anniversary of Their Hollywood Issue