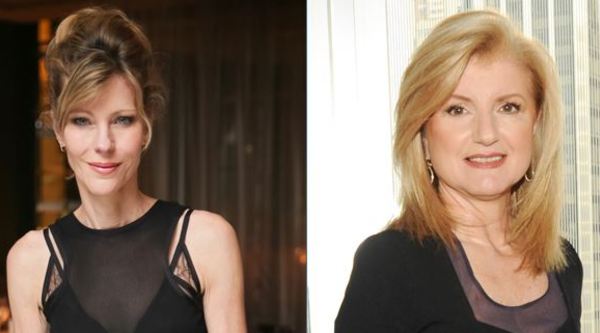 (NEW YORK) The Joseph Urban Theatre in the Hearst tower was filled to capacity on Monday afternoon. Pourquoi? Arianna Huffington was the focus of the publishing house’s latest MasterClass, hosted by ELLE EIC Robbie Myers. Armed with notebooks to capture inspirational quotes, and iPhones for tweeting, the crowd drank up every last anecdote from the media mogul, whose 14th tome, Thrive, hits bookshelves today. Between urging the audience to get more sleep, reminding them to take a break from their smartphones, and promoting the importance of feel-good news, Huffington had the crowd in stitches. From the hour-long chat, we culled 10 of the juiciest bits. What could be better than an afternoon dose of empowerment from a very savvy media exec?
BY DENA SILVER

1.  Huffington’s first call to duty? “We need to lead a third women’s revolution.” Hold up, what were the first two? “The first one was to give women the right to vote and the second was to give us equal access to jobs at the top of every field, which is still incomplete. The third one is really about changing the world we’re participating in. The way it’s designed now, by men, is not working for women, it’s not working for men, and it’s not working for polar bears.” Sounds like changing the world might be Huffington’s next big move…

2. “I had promised myself that I would not write another book. This book is like the surprise baby.” Here’s to one more!

3. Huffington’s mantra of sorts: Get some sleep!  Huffington practices what she preaches at her own workplace. “We have two nap rooms [at the Huffington Post offices], which are completely booked, plus yoga, meditation, and breathing classes. We also have a new email policy that makes it clear that no one is expected to be on email after-hours.” In her own life, she also sets aside ample time to sleep, kind of like a snoozy appointment that requires PJs. She sticks to the mantra: “Sleeping your way to the top is the ticket!”

4. Her best (and possibly most fun) tip to getting a ton of sleep? “Having a sleep buddy. I don’t mean a sex buddy, just the equivalent of an AA sponsor, but for sleep.” So who is her snoozing confidante?  Well, back in 2011 it was Cindi Leive. They blogged about the shut-eye endeavor and bought each other luxe pajamas. Sounds rather chic, non?

5. Are you addicted to your iPhone? Huffington urged us to break up with our phones (and iPads and laptops), at least while snoozing. “Make a time at the end of the evening when you escort your devices out of your bedroom,” Huffington recommends. Otherwise, you’ll be tempted to look at your phone when you wake up in the middle of the night, which totally ruins sleep patterns.

6. What’s Huffington’s “thing”? Breathing. Whenever she gets stressed, she consciously focuses on her breath, for about 10 to 20 seconds.

7. She calls that evil voice in your head an obnoxious roommate, and is a proponent of trying to evict it: “Mine was particularly sardonic, the kind of voice that when you put on a pair of jeans says, ‘Hmm, did you put those in the dryer?’” And whose voice does she imagine is making those rude remarks? Stephen Colbert’s, of course.

8. Live far beyond their resume, Huffington urges! “I was at a friend’s memorial and I was so struck by the fact that our eulogy has nothing to do with our resume. Have you ever heard of a eulogy that said: ‘George was amazing. He raised market share by one-third?’ It’s about the other stuff; how did we make people feel, and what do we mean to our loved ones. We have to give our eulogizer something to work with.” A little morose, but nonetheless, amen to that!

9. She pondered if we could actually recharge ourselves: “Look at how careful we are about charging our smartphones, as opposed to our brains and our bodies. Imagine if something came up on our forehead that said ‘You have 20 percent battery remaining!’” Myers responded, “I feel an app coming on!” We’ll download that.

10. Playing nice hasn’t always been the norm in the media, but it’s trending nowadays… “In journalism, the model was ‘If it bleeds, it leads,’ basically meaning if you put something really nasty and bad on a cover, it will sell. Social media is rather different. What people want to share are positive stories of generosity, compassion, ingenuity.” With that said, who needs negativity?

Finally! Naomi Campbell Weighs In On The Kimye Cover

The Hollywood Reporter Throws 35 Most Powerful...