Hillary Clinton and Marc Jacobs Honored at The Center Dinner 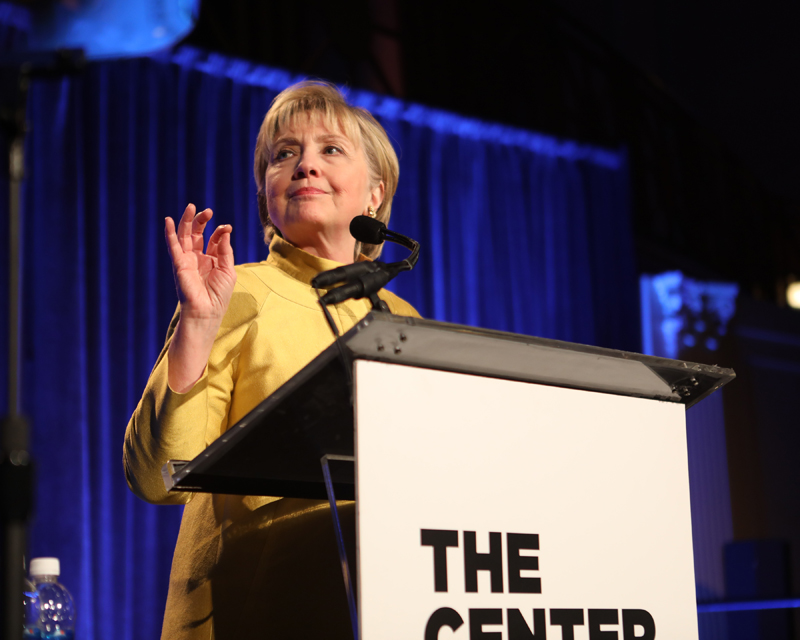 Last night, politics and fashion united at Cipriani Wall Street for the LGBT Community Center (aka The Center) for an annual fundraising dinner, this year honoring Hillary Clinton and Marc Jacobs. Clinton received The Center’s Trailblazer Award in recognition of her work in the fight for full equality for the LGBT community. Jacobs was presented the Visionary Award, while Jan Siegmund, corporate VP and chief financial officer of ADAP, was honored with the Corporate Impact Award and Carmelyn P. Malalis, chair and commissioner of the New York City Commission on Human Rights, with the Community Impact Award.

“The Center has always been a place where we find community, strength and pride…Tonight we’re committing to a new investment in our activist roots, launching an advocacy and mobilization program. We want to be ready at a moment’s notice to inform and mobilize all of you on all of the issues that affect our community. We will provide tools to understand what’s happening, to make our voices heard, and to mobilize when it’s time to take action. It isn’t enough to just resist—we must constantly be taking steps to make actual change and have an impact on peoples’ lives,” said Glenda Testone, The Center’s executive director.

The evening brought out Clinton’s right-hand woman Huma Abedin (although they didn’t walk the tapis rouge), as well as Simon Doonan and Jonathan Adler, Sara Sampaio (who wore Marc Jacobs), Stacy London, Alexis Bittar, and Arianna Huffington. “Despite all the progress that’s been made, there’s a backlash and we see it with gay rights and women’s rights, so we can never take these rights for granted,” Huffington told us on the importance of The Center today. As far was what a Marc and Hillary campaign ticket would look like? “Pretty awesome!”

A silent art auction was also held during the event, in conjunction with Paddle8. Pieces donated by artists Richard Prince, Jack Pierson, Deborah Kass, Nicole Eisenman and Hanna Liden were among some of the works included. Over $1.75 million was raised, with proceeds benefiting The Center’s programs and services for the LGBT community.