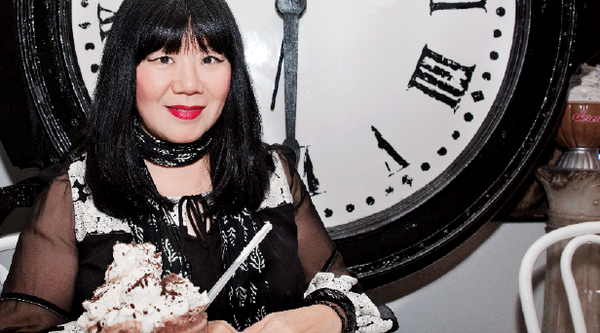 (NEW YORK) Who knew Anna Sui was obsessed with Serendipity? We supped a frozen hot chocolate with the fashion icon and talked Meisel, Naomi, and living la vie bohème.
BY EDDIE ROCHE

How long have you been coming to Serendipity?
Since I was at Parsons! Forever! Steven Meisel and I would come to get hot chocolate.

You and Steven went to school together. Did you know there was something special about him?
Oh, yeah. He was so beautiful. He came walking into my drawing class and I was like, “Who is that?” He asked me to the lunchroom to come sit with him and I was like, “Are you kidding?”

What do you think of his work and influence today?
He’s a genius. When you look at his body of work, it’s mind-blowing. He outdoes himself every time—the discoveries he’s made with models and the careers he’s made. He’s a force.

You also have a long history with one of the founding partners of Serendipity, Mr. Bruce…
I was scared of him. You can imagine how dashing he was with his black hair and moustache. As I got older, we’ve gotten to be friendly and go out to eat together.

What do you normally get here?
The young chicken sandwich with Irish soda bread.

Your first show had Naomi Campbell in it. Do tell!
She’s probably walked in more shows for me than any other model. She and Linda Evangelista helped me get all the other models and they would wear my dresses. It got to the point where I heard Karl [Lagerfeld] was complaining, “Who is this Anna?” That gave me the confidence that maybe I could do something.

How about the new crop of models?
When I started, it was the height of the supermodel. There was a reason they were supermodels. When they put on your clothes, it was magic. They then would say, “Why is Naomi in front of me? I don’t want to go out after her. I should go in front of her!” They’d look on the board and count how many looks the other models were wearing. They’d beg for another outfit. It was so nerve-wracking. Now most of the models don’t look at the board.

Are you still in touch with Naomi?
We had lunch this summer and we text a lot.

Do you miss the early days?
Yeah. Ignorance is bliss and you don’t really know what you’re getting yourself into. It wasn’t so bottom line back then.

It’s very different now!
There was more forgiveness. I feel bad for the designers starting out now. It’s grueling. You need big investment bankers now. I started my business in my apartment.

You launched your cosmetics line in 1999. Was that scary at the time?
It was a natural progression for me. They wanted my cosmetics to look like accessories, not just a beauty product. I loved that, because I’m obsessive about packaging.

Tell us about your new perfume.
It’s called La Vie de Bohème and it’s our 14th perfume. For years I’ve always worn Secret Wish, which we launched nine years ago, but this could be the new one for me.

You’ve been a big advocate of fashion staying in the garment district…
All the uniqueness in New York City that made it special is disappearing. It’s turning into a giant mall. The New York that I love had quirky places like this, neighborhoods where you could go for flowers or Spanish food. It’s all getting homogenized.

You present on Wednesday. Do you see other shows during Fashion Week?
Sometimes. If somebody comes into my office and says I should look at so and so, I’ll look at it. I always like to see what Marc Jacobs is doing, because that’s always so exciting and I can’t wait to go shopping! I’m more excited about the European designers, though.

What about the new generation?
It’s going to be harder and harder for them to do well unless they get substantial financial backing and develop a brand identity. In this day and age, so much of it is bottom line and numbers. It’s a little scary. That’s happened to everything from baseball to art. Everything that used to be a pastime is now just big business. There’s too much product now. I can’t imagine how a new company can do that.

How do you feel about the rumors of the fashion world moving to Hudson Yards?
It remains to be seen. It depends on how much of the craftsmanship and tradition they can still maintain. Is it only going to be showrooms? Is there not going to be any actual making of clothing? Are the rents going to be so prohibitive that nobody can really manufacture here anymore? What happens to the industry? Does it turn out like [it did in] England and all the designers have to go elsewhere? Probably.

Why aren’t more designers talking about this?
Because most designers make clothes overseas.

Lastly, are you going to get dessert?
We can share something! I rarely get to go out to eat for lunch, so the frozen hot chocolate is a real treat.

These Backstage Photos From Anna Sui Are...