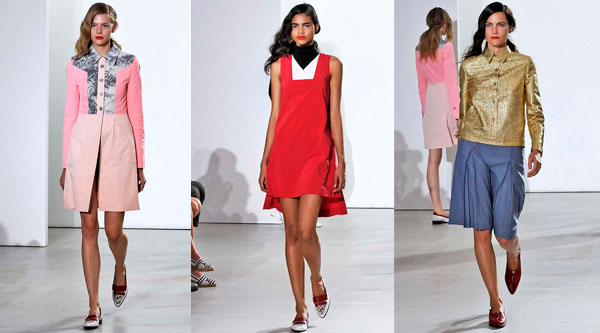 (NEW YORK) Creatures Of The Wind
“Hail Hyperborea” was the theme of Shane Gabier and Christopher Peters’ Spring show this season. What on earth does that mean? Something otherworldly—mythological, to be exact. “It’s a place in ancient Greek mythology where the sun shined 24 hours and everyone lived forever,” said Peters. Sounds (and looked) good to us. The resulting collection included several gold and silver lame below-the-knee skirts and short sleeved Forties and Fifties inflected button downs that were less glitzy-glam than they were straight-up cool. As for the era references, the duo sourced the vibe and silhouettes of the collection from the photographs of Eugene von Bruenchenhein, an obscure artist who hailed from Wisconsin. The shutterbug’s portraits of his wife from that time period have recently been thrust into the spotlight thanks to the Venice Biennale. Thus, the Chicago natives infused elements of Western clothing mixed with a Grease-esque “Pink Ladies” feel. Think swing skirts with big rose accents, neck scarves, and a long pale pink blazer with a destroyed flower Swarovski crystal detail worn over a cashmere metal melange ribbed sweater and black paper nylon sport shorts that sashayed down the runway to Hisham Baroocha’s mix of the Beach Boys and Nancy Sinatra.

Tadashi Shoji
Fans of masculine dressing need not apply for Tadashi Shoji’s slew of Spring ’14 looks, because the designer was all about the feminine side of things. In a collection awash with pastels, such as soft yellow, pale pink and baby blue, there were also confections crafted from visible tulle and flowing fabrics. Why so cheerful? Perhaps Shoji picked up a copy of Lean In recently, because his inspiration was all about the fact that “women no longer have to fight with the men’s world” and “women can show their feminineness to the world.” And show it they did! But not everything in the collection was frilly; the first look combined a neoprene dress with a woven silk organza ribbon top, while other pieces included fancy feathers and a bevy of embellishments.

Richard Chai
For a buzzy audience including a front row filled with the Jonas brothers, Zachary Quinto, and Christina Ricci, Richard Chai showed his men’s and women’s collection with winning results. Chai took his inspiration from geometric shapes and delivered unexpected combinations. The show was also the debut of select styles of leather jackets from the new Andrew Marc x Richard Chai collection; expect the lush hides to sell qwell. “It was a very calm process,” Chai told The Daily after the show. “It was very lovely and chill. I was inspired by New York and my love of being here. People think it’s a concrete jungle, but I find it beautiful and romantic.” With an attitude like that, sounds like we could all use a cup of Chai to keep calm…

Tocca
“Dancers off-duty” was the theme for the brand’s first ever runway presentation, and the outcome was delightfully feminine. “I like building installations and I like building a complete environment, but we felt like the collection needed the movement and wanted to show double the amount of looks,” said TOCCA creative director and designer Emma Fletcher. In a palette that began as neutral black, cream, pale blue and (of course!) ballet pink, traditional dance uniforms were interpreted into modern, urban looks. Designed to transition from studio rehearsal to performance, and just as easily segue to everyday life gear, details varied from the literal—opaque pink back seam tights and metallic ballet flats—to the whimsical. For the latter? Cue the glittering undies and stilettos adorned with chiffon ruffles. Next up came an assortment of arguably more practical off-duty looks: Crepe suiting in crimson and navy, form-fitting cocktail frocks, and trench coats—perfect for April showers. A blooming navy floral print, lemon colored polka dots, and navy and white jacquard brought a welcomed intermission from the subdued nudes and pastels. Subtle details added interest, a pas de deux between elegant and playful. Swinging pleats at the side seams of suit jackets peeked out from under tailored sleeves, and discreet floral lace in airy cotton became sexy sheer glimpses in otherwise modest sheaths. Sheer, weightless, and falling softly against the female form, it seemed TOCCA’s Spring 2014 collection very much celebrated the fluid strength of a dancer’s body. Who will be seen sashaying across the city in the collection next spring? According to Fletcher, “I think she is an ultra-feminine girl that is really New York City. A girl that does something intensely, but she’s still a feminine woman.” D’accord!

Fashion and Broadway Meet Up For A...

Fashion and Broadway Meet Up For A...