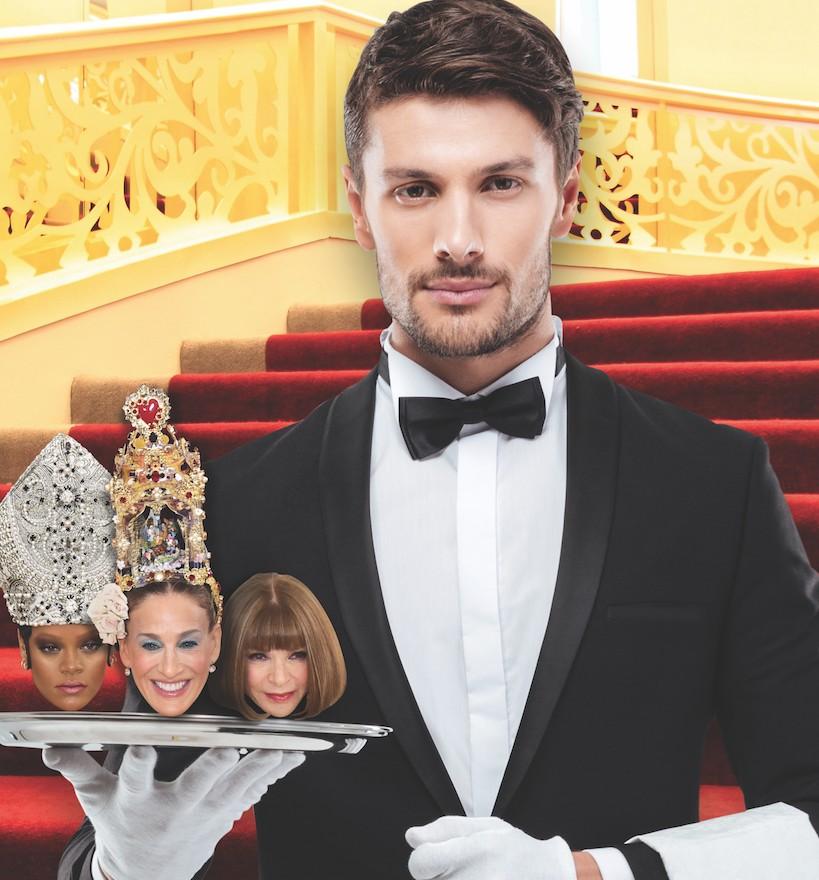 What’s it like to work the Met Gala?
It’s like any other catering gig. I held a heavy-ass tray of Aperol spritzes for 90 minutes before I got a break. My back is so f**ked up!

And you’re in great shape!
Right!? I was excited to work the event. They wanted model staffers, so I thought I’d be one of the guys in tuxedos, greeting guests on the steps of the Met. Nope!

Did you enjoy the experience?
I would have been so bored to be a guest. It’s not exciting—at all. You show up, do red carpet, you have cocktails in the Egyptian room for an hour, and then the A-listers show up right at the last minute. This year was Catholic-themed, and there was a church choir singing. And then they sat down for a dinner that went super fast because Anna [Wintour] is a stickler for efficiency. They were on our asses about timing. I get it. Whatever!

Keep going!
Madonna! Her performance took way too long to get going. All the celebrities were leaving. They put six of us waiters by the exit of The Met to direct people to a different exit. People were not having it. They were like, “F**k this! This dress is so crazy huge. Let me out now!” Madonna started her set with singing monks and it would have been cute if they sang for a minute, but she let them go on for like five minutes, which is why everyone peaced out. Rita Ora and a bunch of models were like, “Bye!”

How were the celebs behaving?
People were so obnoxious. Of course, it’s not the ones who are actually famous. It’s not the Hugh Jackmans. [Redacted teenage C-lister] pulled me aside from my duties and asked for bread. He wasn’t at a premium table, so he hadn’t been served yet. Sorry! There was also this other model who I had to look up on the Internet. [Ed. note: One of the most famous models in the world.] When we were telling people they had to use the alternate exit she said, “You can’t hold people here against their will! That’s illegal. That’s kidnapping.” The way she was behaving was disgusting. She was complaining to us about how heavy her dress was. Did anybody force her to wear it?

Maybe! What were the rules?
Our cell phones were confiscated the second we walked onto the property. No texting, no photos. I’m surprised they didn’t make us sign an NDA!

Thank heavens for that! Did they discourage you from talking to the celebrities?
They wanted us to limit our interactions. They didn’t want to seem messy. Their whole thing was about focus, precision, and speed. When we were serving, the only thing we were allowed to say was, “May I?” There was no, “Heeey, want a spritz?”

What time did you arrive?
We showed up at 2 p.m. in dress pants, dress shoes, a belt, and a white undershirt. They give us a button-down, a bow tie, and an apron. Then we started rehearsing. We had three days of rehearsal.

Three days!?
We had a French service rehearsal, because [redacted editrix] requested French service. We all had to go down to the caterer’s head office and practice French serving a table while we were timed. Originally, they wanted to do old-school spoon-and-fork French service, but they didn’t have enough servers. They finally decided to use tongs.

What was the other rehearsal for?
The day before the event was rehearsal for choreography of service in the actual Met. On the day of the event, we did a full rehearsal before they put us into place at 6 p.m. with our trays of drinks.

Was there a lot of binge drinking?
Some celebrities tried to take bottles from the bar and hid them around the museum so they could have their own stash.

Did you see smoking?
Everyone was smoking constantly throughout the party, but they were mostly into e-cigs this year. Some celebs were walking around blatantly smoking weed pens.

Did you get a chance to have dinner?
They always feed us. This year, it was big pans of lasagna and salad, and a vegetable lasagna for people who don’t eat meat. There was also a peanut-butter-and-jelly station for those who didn’t feel like waiting in line for the lasagna. I couldn’t resist!

This conversation gets better by the minute. Which celebs did you serve?
Andrew Garfield grabbed a glass of water from me. It took everything in me to not tell him he was fabulous in Angels in America.

Would you do it again?
Probably not. The real celebrities, like Sarah Jessica Parker, were lovely. It was the people who are trying to make it in the Hollywood game who were the most obnoxious. I wouldn’t work it again, but obviously, if I’m invited as a guest, I’ll go.