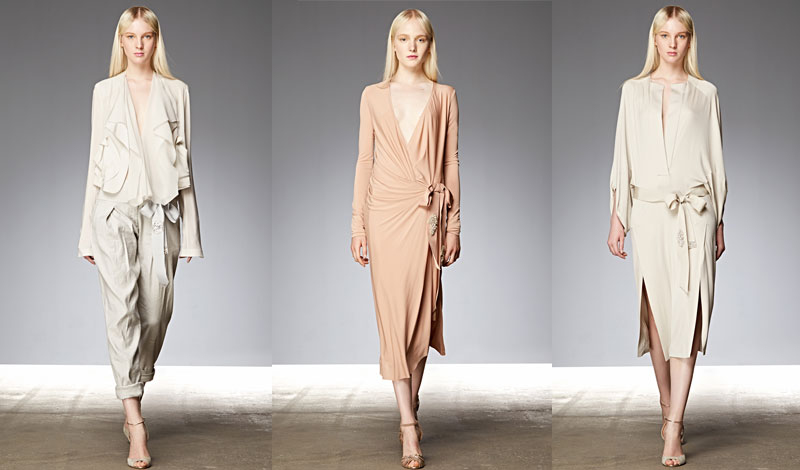 It’s a pajama party chez Donna Karan! It was all feminine softness mixed with a sense of laid back chic that defined the designer’s resort collection this season. “From boudoir to black tie” read the press notes, which meant that there were slip dresses to be worn day or night, wispy chiffon bias-cut dresses, slouchy pants, and jackets and dresses that came tied at the waists like silk bathrobes. Fabrics so soft made a trench-like nude wrap dress look like something Dita von Teese might wear on a lazy, but highly stylized afternoon around the house. The colors came as mostly nudes, off-whites, pale greys, and blacks. But a gold shearling coat worn over a sheer sequined skirt and nude blouse had a bit more flash, although we could easily envision that coat with a pair of jeans. Evening wear could have doubled as fancy lingerie had it been presented in another setting, as was the case for a deep-v camel and pewter-colored gown. In other words, it’s the perfect set of looks for breezing into the resort season.

The Caribbean Is Calling! Why Malliouhana In...