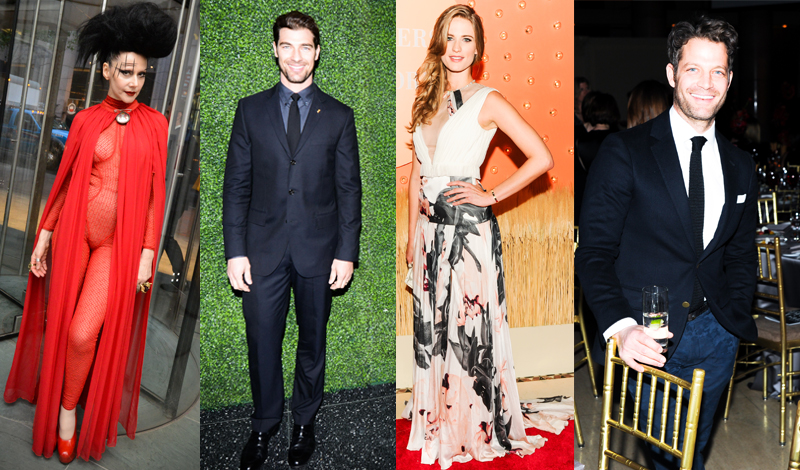 So many cool parties and so many crazy costumes. Will you be going to Fiona Byrne‘s blood-themed bash? Heidi Klum‘s annual media mayhem circus? The Boom Boom Room, where the PYTs will be dressing super “scary”? Amy Sacco‘s No.8? Party Queen Susanne Bartsch‘s “HalloQueens” at MoMA PS1? Well, my loves, you better have your costume sorted out. It’s going to be an Instagram explosion tonight. I rang up some of the city’s chicest to find out all about their looks…

Julie Henderson, Model: “I’m dressing up as the Day of the Dead. I was inspired by the theme for the Halloween party I am cohosting ‘Old Hallows Eve’ at The Rose Bar. I wanted to be something scary, but still glamorous. My advice for Halloween in the city is to pick one or two spots and stick to them. The traffic can be a nightmare.”

Gigi Burris, milliner: “Evan and I are going to be bohemian as Little Red Riding Hood and the big bad wolf.”

Nate Berkus, interior guru: “Sadly, we are moving in to our apartment after six months of construction, so I’m dressed as a stressed-out decorator.”

Susanne Bartsch, nightlife icon: “I will be the Queen of Puffs with my Mr. Pearl corset and a royal powderpuff. I am going to HalloQueens at  MoMA PS1, then at midnight the whole museum is parading over to the Warehouse for the after party.”

Andrew Bevan, Teen Vogue: “Halloween is my favorite holiday of all time, and I wanted to dress up like the scary baseball player gang member from the cult classic The Warriors (if you’ve seen the movie, you know what I’m talking about). Anyway, that will have to wait until next year, because this year I’m a bridesman in a wedding at the Winvian in Connecticut and I will be at a rehearsal dinner. The dress code for the night is head-to-toe black. Naturally, I’m going to wear a pumpkin-colored Calvin Klein Collection suit with matching orange shirt just to rebel.”

Mauricio Padilha, MAO PR: “I will be King Kong, with my own life-size Empire State Building and a tiny blonde. I’m going to both of Susanne Bartsch’s parties first PS-1 then to the MoMa warehouse. I first fell in love with NYC as a kid watching King Kong with Jessica Lange. I think I wanted to be Jessica but I look more like Kong; that’s the way the cookie crumbled.”

The Blonds, designers: “We’ll be hitting up Heidi Klum and the Susanne Bartsch parties as well as a few others. The only clue we can give away about our costumes is….they will be black, white, and red all over.”

Amy Sacco, disco diva: “I am going as the invisible woman. We all get one night a year to dress in full disguise, and this is the only night I get to be an anonymous guest like the rest of the revelers.”

Cory Bond, model: “Well, I was going to be Batman in a large themed group, but I got booked on a shoot in Miami and now I’m not going to be going out for Halloween. I’m happy about the shoot, though.”

Dianne Brill, muse: “I will be Tritania, the Sea Goddess. For Halloween you just have pick a costume that reflects your fantasy self; a role to play for just one night. With my proportions and mood, it has to be mermaid-ish. I’m going to both of Susanne Bartsch’s Halloween parties. She throws the best!”

Bibhu Mohapatra, fashion designer: “I’m super thrilled about Halloween this year. This is the first Halloween for me in India. I’ll be with my friends in Mumbai, in full Bollywood character outfits from famous blockbuster Bollywood movies. We will be in a group at a costume dinner party at a friends penthouse overlooking the Arabian Sea, followed by some stops at cool Mumbai parties later on in the evening.”

Cameron Silver, Decades: “Since I more or less dress in costume everyday, I am honoring my friend, designer Hatem Alakeel, and his Halloween birthday and wearing a Saudi thobe he designed. You can call me Amir Karim, my Arabic name, and I will likely stay home and take lots of selfies.”