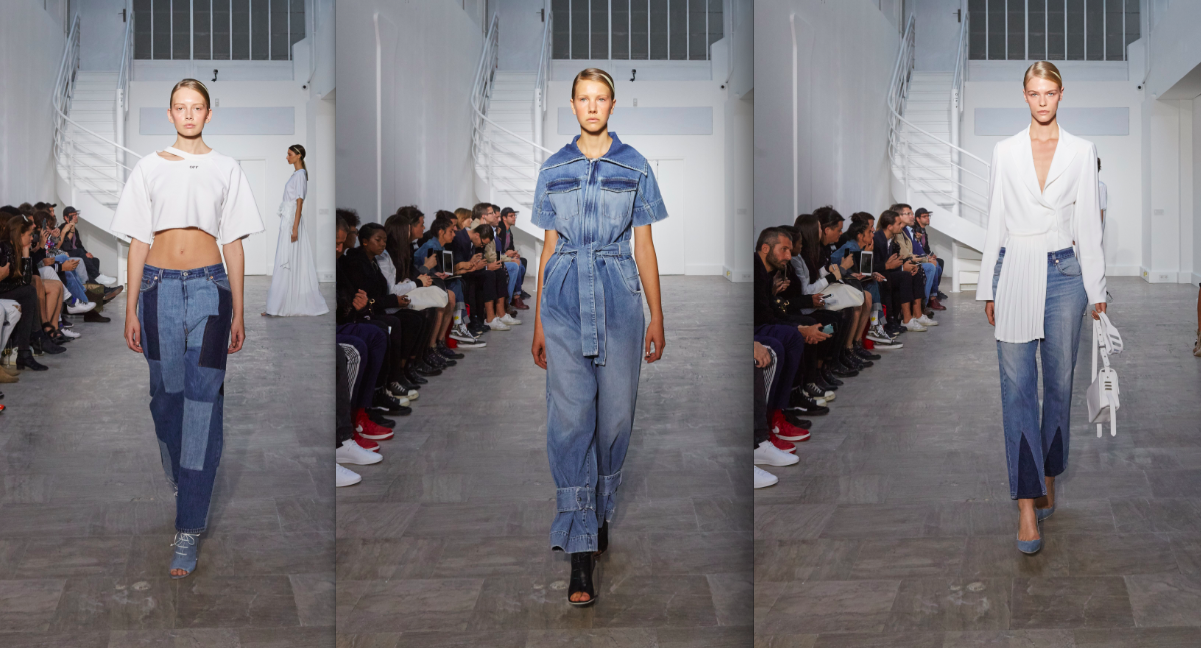 Seriously cool denim. That was the takeaway from Virgil Abloh’s presentation for Off-White at the Galerie Joseph Turenne. “It was about the white T-shirt and jeans as the universally approved outfit,” Abloh told The Daily backstage. “For the modern girl, it’s not a day to night thing. You can wear a white tee and jeans and a pair of Stan Smiths all day and night long. I wanted to make a collection that celebrated that.” Except for the highly covetable denim jumpsuit, which was one of the stars of the show and an original piece, the denim was a special collaboration with Levi’s, which Abloh said would be an ongoing collaboration. “I was doing denim and I called them up and said, ‘You should get in on this wave now.’ I feel like it’s going to be better if we do it together, you know? We can bring energy to a historical brand.” It’s a tough to make denim look fresh these days, but pieces like a low slung pair of boyfriend jeans that buttoned up the leg on each side felt like denim you can’t get anywhere else and in fact, they will be ultra exclusive. If you want to get your hands on these jeans, you will have to have them special ordered.

The presentation was an intimate affair in a mini show format that involved three viewings of the collection with front row seats for everyone. It opened with a recording of one of New York’s street culture kings Aaron Bondaroff a.k.a. A-Ron or A-Ron the Downtown Don talking about street style. It was a recording of an interview that A-Ron did in 2008 for YouTube with Heron Preston, another street culture luminary and friend of Abloh. “He cemented for me exactly why I’m here. It was just about the kids in New York that created the fashion, art and music scene, and it ended at graphic T-shirts,” said Abloh. “After all those years, Heron, myself, Lukka [Sabbat], Ian [Connor], we’re still those kids in New York hanging around Lafayette, Prince, and Mercer. What A-Ron was talking about in the recording is that he was essentially predicting a moment like this. It was just two friends riffing on a corner and I chopped up the recording and put it at the beginning of the show because it does all of the talking that I would have said for myself.”

The Daily Roundup: Tim Gunn On His Relationship with Anna Wintour