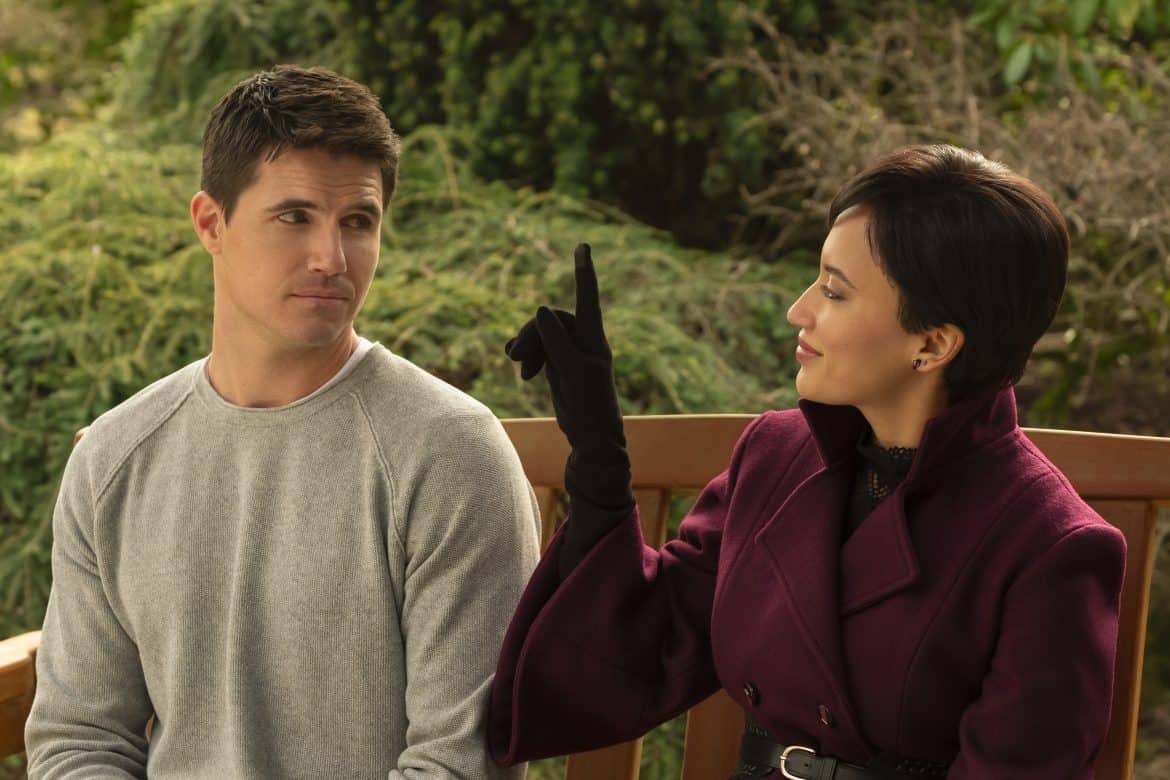 Amazon Prime Video’s new show, Upload, is a dark (but not too dark) new comedy set in a near future where people can cheat death by uploading their consciousness to a virtual world. Created by Greg Daniels (The Office, Parks and Recreation), the show stars Robbie Amell as the recently uploaded Nathan and Andy Allo as his real-world handler (or “angel,” to use the parlance of the show), Nora. The Daily caught up with the two stars last week, on Amell’s birthday, to learn more about the show, how they got involved, and which Hogwarts houses they belong in (because why not).

Happy birthday, Robbie. Any big plans for today (besides this call, of course)?
Robbie Amell: Oh, yeah. Big party planned. Have about 60 people coming over, so we gotta wrap this up. No, it’s just me, my wife, and our seven-month-old. We’ll probably just watch some bad TV or something.

Anything in particular?
Robbie Amell: We’ve been watching “Too Hot to Handle.” Finished that yesterday. Gave my son a little anatomy lesson! I’m actually starting Jack Ryan on Amazon Prime now. I’m a big fan of John Krasinski. In my house, the only person who like him more than me is my wife.

So are you guys watching his YouTube show, then?
Robbie Amell: Yeah, we love it!

What about you, Andy? What are you watching?
Andy Allo: I’ve been rewatching all the Harry Potter movies. I’m on the last one of the series. It’s been fun to sort of revisit my teenage years [through them].

Robbie Amell: You are not a Gryffindor. You’re a Hufflepuff who thinks they’re a Slytherin. 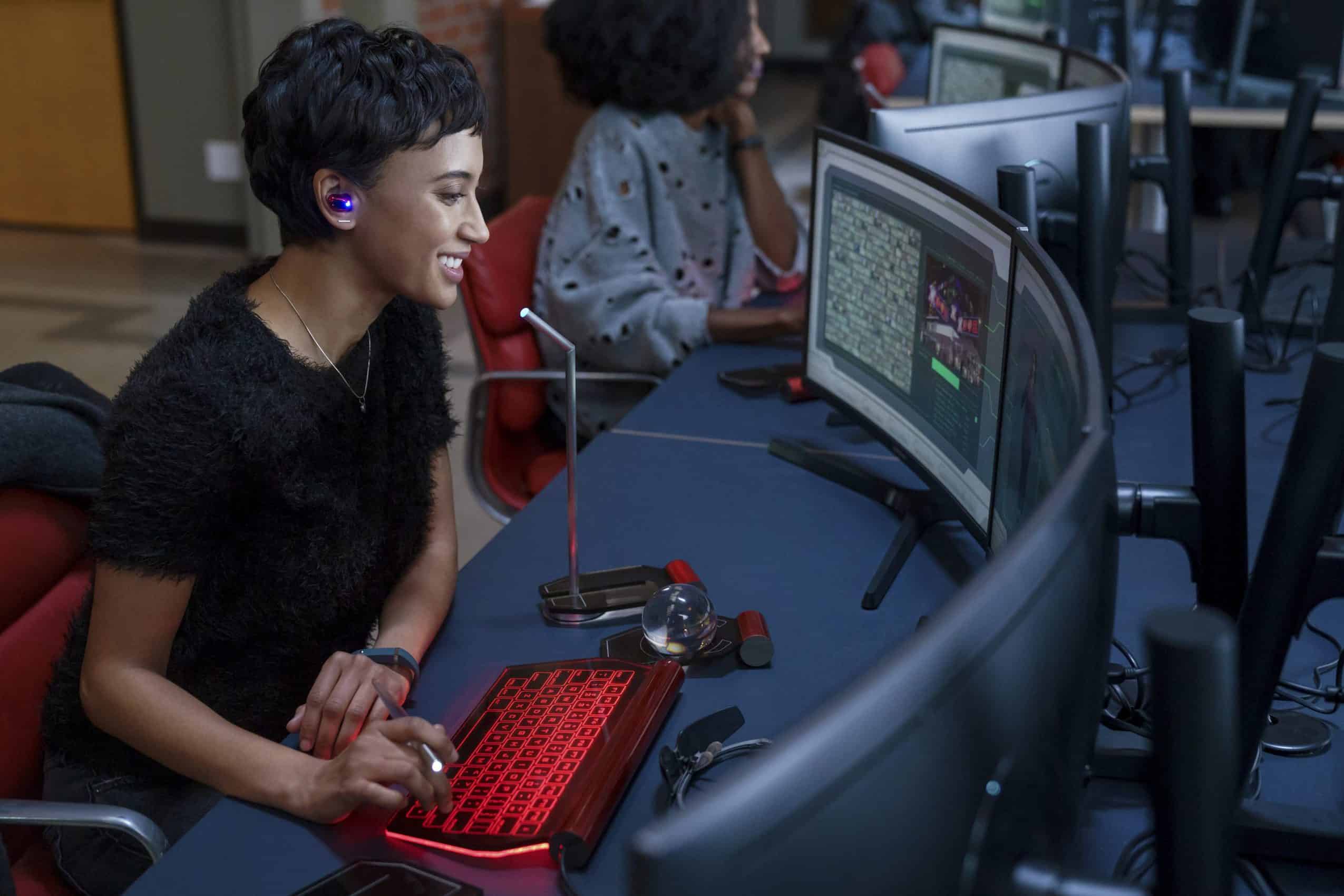 What are you, Robbie?
Robbie Amell: I’m a Gryffindor. For sure. No question.

Andy Allo: No, you’re a Ravenclaw.

Robbie Amell: I don’t even know what Ravenclaws do. Nobody knows!

So how did you guys get involved with you new show Upload?
Robbie Amell: It’s funny. A couple of months before I got the audition, I told my agents that my wife and I were going to try to have a family in the near future, so I didn’t want to do some nine-months-a-year network TV thing. I was like, “Honestly I would love to do a half-hour comedy on a streaming service with a great producer.” And Greg [Daniels, Upload creator] heard that and went “two out of three ain’t bad!”

I really “fished my wish,” as I say, and Greg was amazing. I went in to read for him and I was the first person to audition. We shot the shit for a little while. He said he saw The Duff and thought I would be great for Nathan. And I was like, “I’ve watched all you shows and I’m a huge fan of them, back to The Office.” The audition took like an hour and 20 minutes and I left feeling like the job was mine. But then my agent was like, “Greg loves you, but you’re the first to audition, so they still need to see more people.” But then a week later, they phoned and we’re like, “Sorry. You know, he loves you, but they’re going in a different direction for Nathan.” And I was just like “Okay, it’s just one of those days.”

But then, a month later, the day before Thanksgiving, they phoned and told me I was going to go back in that Monday to screen-test. So I went in thinking it was going to be me and a bunch of other people, but it was just me and Greg and he was like, “You were the first person to audition for this role and it would be cool if you were the last.” I was like, “Yeah, that would be great.” And luckily I was the guy.

And I read with a bunch of Noras and a bunch of Ingrids and the last Nora to walk in was Miss Andy Allo. 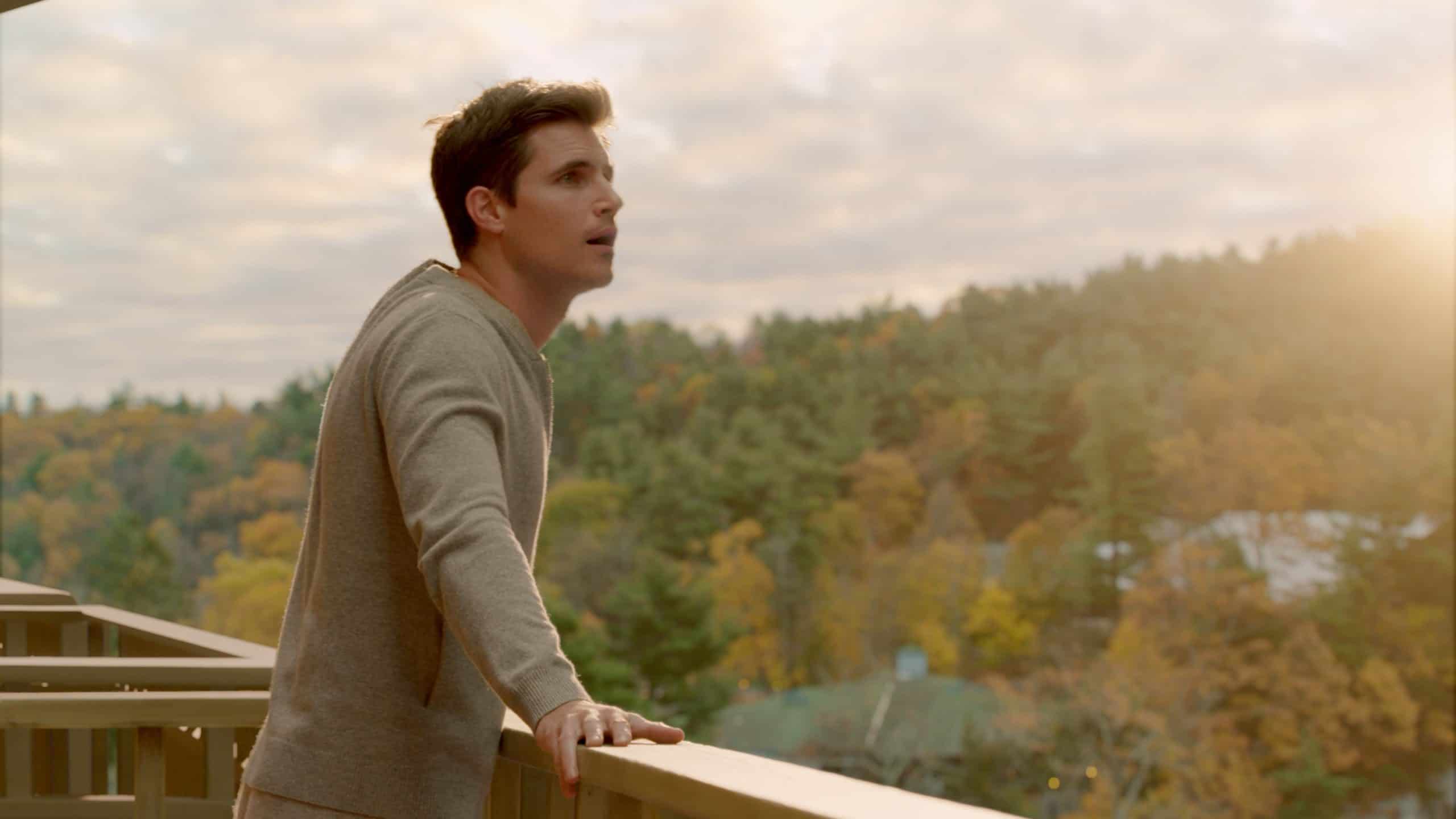 Andy Allo: You teed that up nicely!

Andy Allo: Well, I wasn’t going to rat you out, but OK. Yeah, I was the last person to audition. And it actually happened really quickly for me. It happened in about a week — from the first audition to booking the role, which was so fast! I remember, when I went in for my first audition with Greg, he just was throwing like scene after scene at me. And some of them were not any of the scenes that I had seen. So he’d be like, “Hey, can you just hang out for a second?” And then he’d run into the next room and grab another audition and come back and be like, “It doesn’t matter about the words. Just have fun!” And that was just the energy right away, where I was like “Oh, we’re just playing!” And it was so cool to do that. 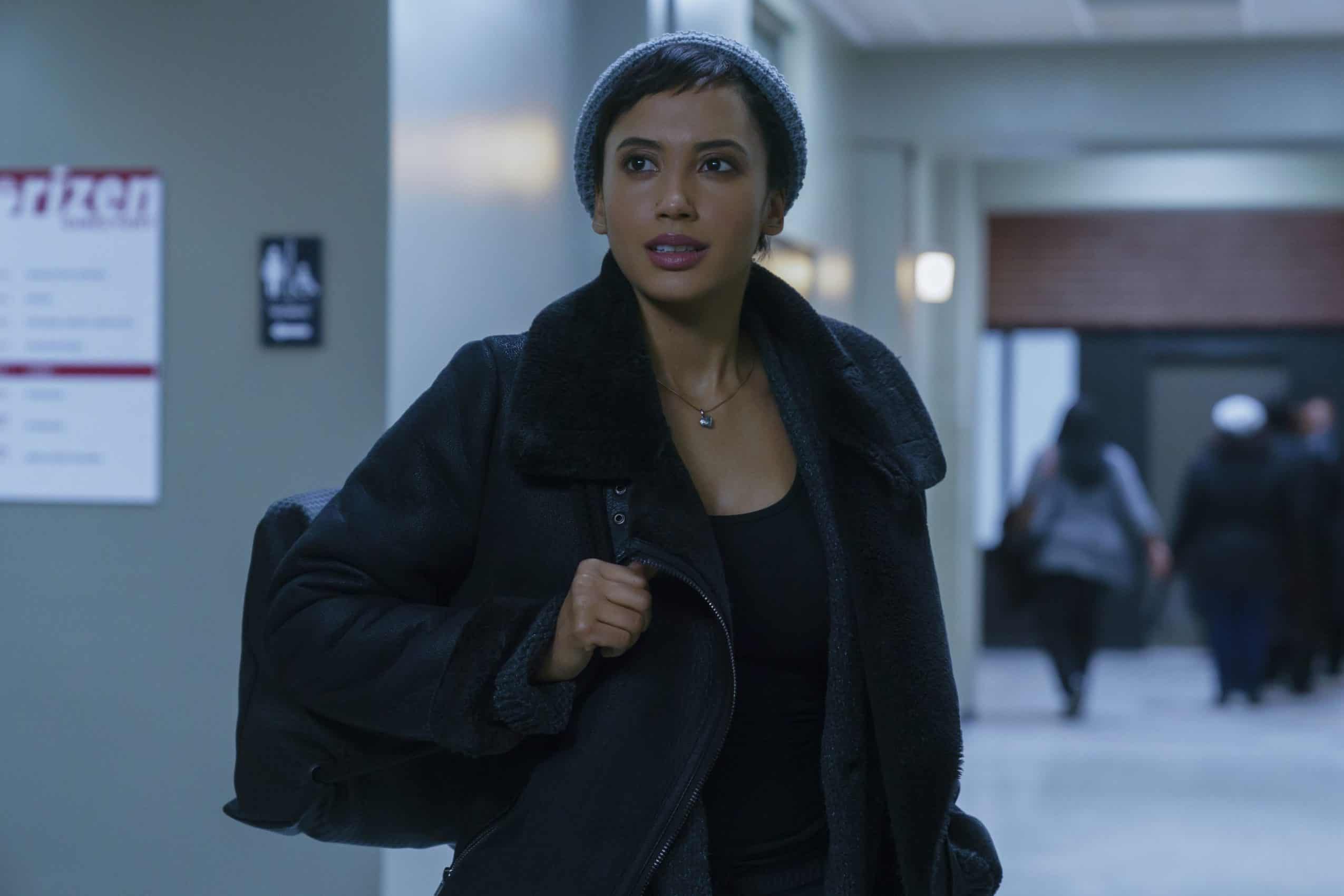 And did that sense of fun and play carry through on to set?
Andy Allo: Yeah, totally! Right away Greg was so collaborative. He really gave us space and empowered us to be creative and use our voices as the characters, which was great.

Robbie Amell: For someone who has been so successful, there was no ego. 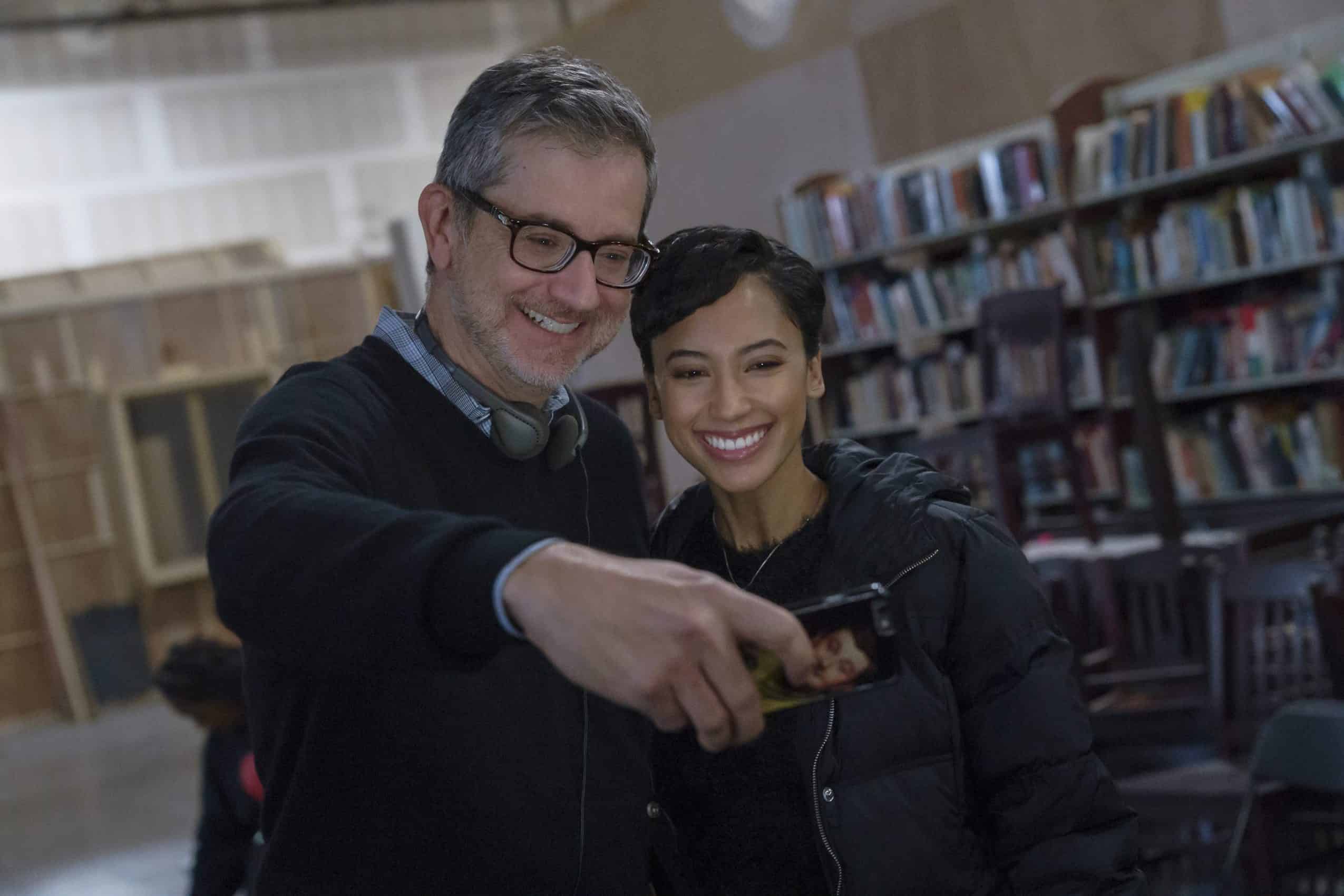 Now, I’m sure you’ve been asked this question a lot today, but I have to ask, if you had the opportunity to upload, would you do it?
Robbie Amell: You know, I have a line in, I think it’s episode seven, that Greg’s son, Owen [Daniels], who plays A.I. Guy, wrote for the show. I think he was maybe 18 or 19 at the time, which is so unbelievable for someone so young to write something so simply beautiful, I said,”It doesn’t matter if we last for a thousand years here; it’s going to feel short when we’re out of time with the people we love. And that’s exactly why I would upload. Just to get more time with my friends and family and to se my kids’ kids’ kids’ kids. 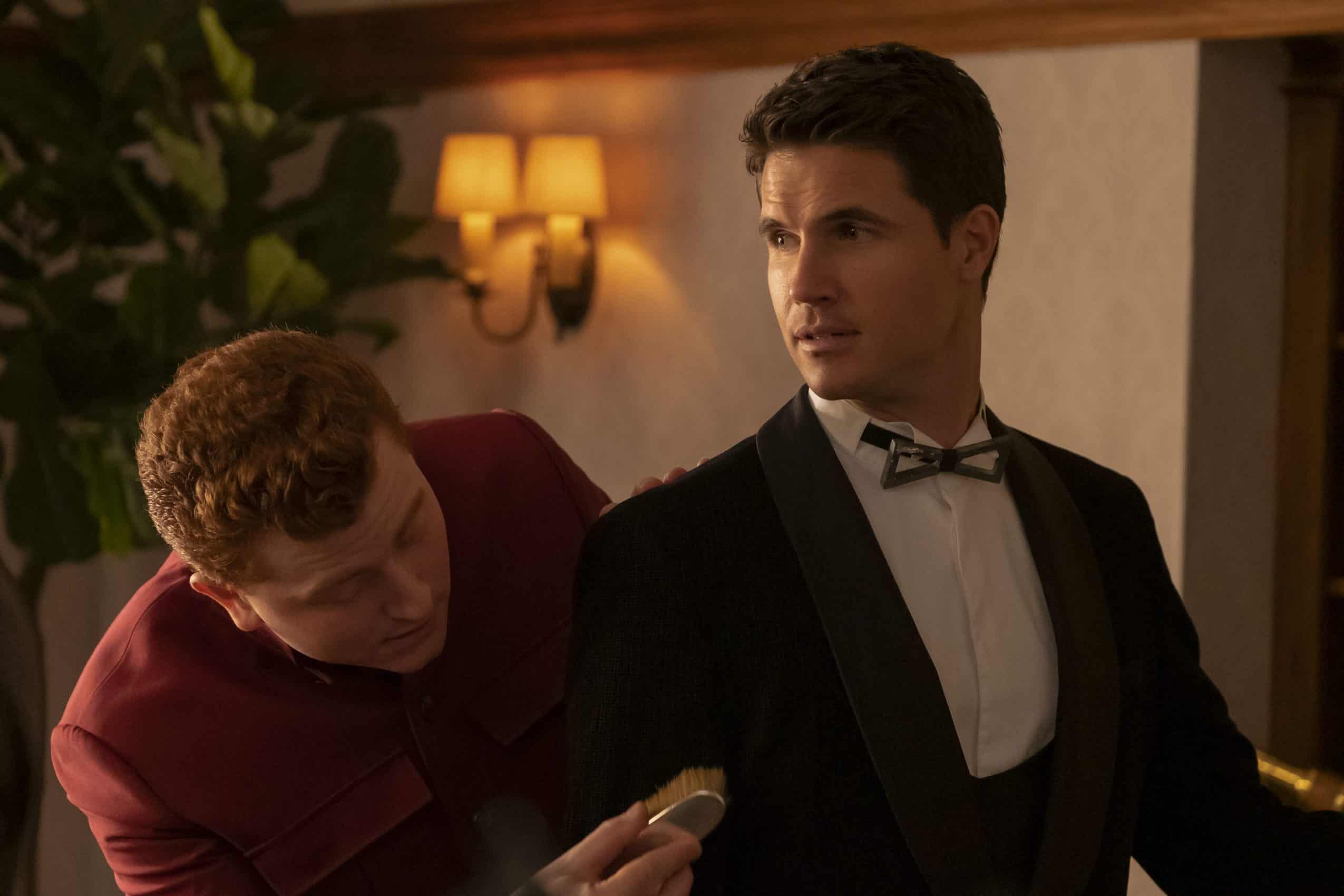 Andy Allo: I really want to see the world! I want to learn, like, five languages. I want to become a world-renowned chef. There are all these things that I want to do and I feel like if I were to upload I would be able to achieve all those things. So, yes, actually, I would love to upload.

Uploading isn’t all great, though. I have only seen the first few episodes of the show so far, but there are som pretty dark aspects tot he show and the world Greg Daniels has created, don’t you think?
Robbie Amell: I think Greg did such a good job of taking the gross parts about real life and making them exist in what’s supposed to be this digital heaven. And talking to him, it’s so interesting because he’s like, “Well, if the digital afterlife was created by the same people who live in the real world, then there are going to be the same problems.” Division of wealth is a really big problem. And capitalism. And greed. And that’s when you meet these two-gigs, who are living on a limited data plan and even Nathan is like, “Why? This is all just code. Everyone could easily have all these things.” But that’s not how the world works and that’s not how business works., even in the digital afterlife, which I think is so real. And it creates comedy, but it also makes you think about things in a different way and go, “Yeah, that’s pretty gross.” And I love that part of the story that Greg tells. You know, he says, “It’s not a utopia or a dystopia, it’s a middle-topia.”

9 Healthy Smoothie Recipes That Will Make You Go Mmmmm!

Here is my opinion base on the whole season that I just watched non stop today in the morning since I dont have much time these days, turning 50 this saturday. First, let me congratulate both actors, you do have great chemistry together and good acting skills. I didnt know Andy but I knew Robbie from the Flash. But again, great work Andy, you nail it and Robbie too. The season was a great run but didn’t like the end. In fact, I haven’t like any endings from any series in these last 10 years. The problem is that the writers dont know or has forgotten how to finish a good story so they abuse the cliffhangers thinking that people will be hook to watch next season or there wont be a next season. The love story was great, the development of their relationship was well put, everything was working fine until the end. Writers todays should work good endings for every season and work harder to pick new stories for the next seasons. That is the secret of show lasting a decade. Most of the show last 1, 2 tops 3 season because most of the time writers couldn’t delivery a good season finale. As for the concept to UPLOAD, in real live there is not point cause it wont be your soul and it is a good thing writers introduce that perspective from NORA´s father,that was great and the episodes were getting better and better including episode 10 until the last call from Nora. How smart was this girl all along the series to NOT notice why the weirdness response from Nathan was due to the 2 gig environment, she even walk Nathan through the 2 gig environment half season through the show. I mean, you are writing a master piece to ended like $1 comic book from the 60´s? even those comic book had better finale. The problem here could be the writer forced the end he want or the production company wants. People need to feed the family, which I understand, so they have to settle with empty endings in some cases because that it is what the production want it. Therefore, after all the crescendo and love feeling for this series up to the last 20 or 30 min from last episode, I left empty. Empty is a big word but the right one for a bad conclusion from a masterpiece. I hope some day Hollywood change their perspective about their finales for movies or series because they are doing a bad job. We live in a complicated dark times and people need hope and more empathy for others. I dont know if anyone care to read this but I hoe some writers would take note. Best regards, RG