Tommy Hilfiger and The Chainsmokers Dish on Their Smoking Haute Collaboration! 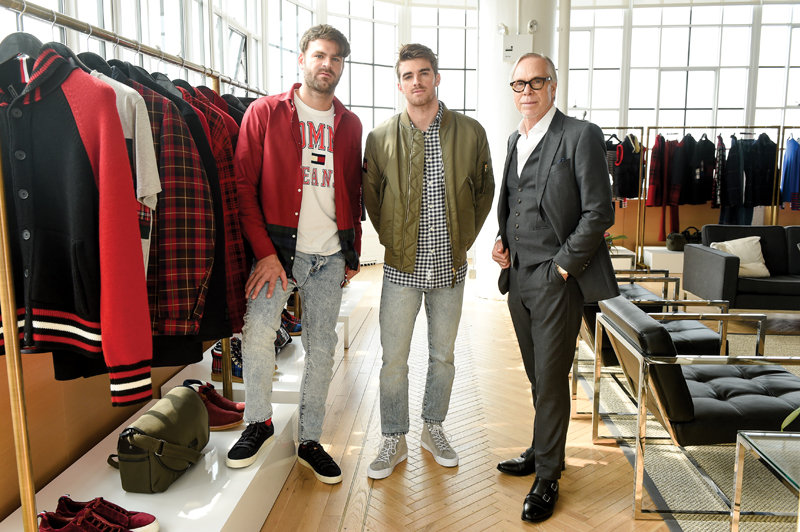 Tommy Hilfiger’s new partnership with The Chainsmokers is music to the fashion world’s ears. The DJ duo—comprised of Alex Pall and Drew Taggart—who broke through in the biz with their 2014 hit “#Selfie,” is now upping their fashion cred with a gig as Hilfiger’s latest brand ambassadors. Next stop for this trio? London!

Tommy, why are you a Chainsmokers fan?
Tommy Hilfiger: They’re a cool band, and I like the idea that they blend all different styles of music together. We’re always associating with musicians, and we always have our ears and eyes open to what’s next. Their album debuted at No. 1! They really have a connection with Generation Z and the millennials, too—also known as the Gigi [Hadid] group.

What does being a global menswear ambassador entail?
Hilfiger: They’re wearing all our clothes on their world tour now. We also collaborated on a special jacket. They really suit our menswear Hilfiger Edition Collection. You’ll see the way they look and the way they wear their clothes is authentic and it’s how we designed this collection to be: casual and cool with an ability to mix and match with anything.

You’re showing in London this season. Explain!
Hilfiger: We wanted to take our show on the road, and we had great success in L.A. last season. As a global brand, we have to reach a wide audience, so we thought about Europe, and where better than London? Especially for this type of collection—it’s really rock-inspired.

What are your London haunts?
Hilfiger: I stay at different places all the time because I like to sample different hotels, so I go everywhere from Claridge’s to The Connaught to The Beaumont. For restaurants, I like Zuma, La Petite Maison, and Koi. Chiltern Firehouse is also pretty cool. I also check on a lot of stores—Harrods and Selfridges—and I go to the boutiques on Bond Street.

What’s the most British thing about you?
Hilfiger: My suits! I actually have them made in London.

In general, who are your male style icons?
Hilfiger: I like the Kennedys: Jack Kennedy, Robert Kennedy.… I’m inspired by their nautical side, which I’m quite obsessed with. I also look at David Bowie and other English rock stars, and how they’ve taken British style and exaggerated it.

We have to know: favorite Chainsmokers song?
Hilfiger: “#Selfie,” of course!

Alex and Drew, why did this collaboration feel so right for you?
Drew Taggart: It’s been pretty rad to even have this opportunity. I’m from a small town in Maine with about 9,000 people. There’s a Tommy Hilfiger store on the corner that I would see driving to and from school. It was part of my upbringing!

When did you get into fashion?
Alex Pall: We’ve always liked clothes.
Taggart: Fashion wasn’t into us. [Laughs]
Pall: We are finally coming into ourselves. We love film, art, and fashion, obviously. It’s exciting to come into this world and learn so much about it by partnering with Tommy. What’s fascinating to me is how the brand reinvents itself every season. That’s challenging.

How have your styles evolved?
Pall: We definitely take more risks now than when we were dressing just for ourselves. For a while, we used to live in New York and would wear jeans and a lot of black. Now that we’re in California, we wear a lot more patterns and cool shirts.
Taggart: Facebook Memories reminds you of the dark places you come from. [Laughs]

What do the women in your life think of your first fashion campaign?
Pall: They think it’s ridiculous. They say, “I can’t believe you guys have such a cool opportunity.” I would like to think we’re known as stylish now, but we can’t take too much credit—we have an amazing stylist who’s turned us on to some really cool stuff.
Taggart: Our friends don’t expect to see photos of us in a Tommy store. I didn’t even believe it at first until I started seeing it. We’re constantly getting messages from our friends—three or four an hour. They say, “What the hell?! This is amazing.”

What are your favorite things to do in London?
Taggart: So many things, and we’ve actually written a lot of songs in London.
Pall: Love British chocolate—can’t get enough of that—and strawberries and cream. I like the pub scene, too. Every time we go back to a city we have a better and new experience with it.

Are your families going to go to the Tommy show?
Pall: My mom’s British, so if she can make it, she’ll definitely come. Our extended family wants to come, too—they usually say no!

What would we be most surprised to find in your closet?
Taggart: I have this, like, techno-colored polyester sweater with a cat on of it that I’m saving for a special occasion. You’ll know it when you see it!
Pall: I have a lot of Jordans. I’m a low-key sneakerhead who’s in denial about it. You’ll also find a lot of women’s underwear, because I share my closet with my girlfriend.

What should performers never wear?
Pall: Gore-Tex. Doesn’t breathe well. Terrible idea.
Taggart: Alex wore a Supreme jacket when he was performing once. He was so sick, and he was like, I’m just going to sweat out this disease. After 90 minutes, he was completely soaked!
Pall: You want to feel confident, so just wear what you feel most happy in and that’ll translate to your performance. I respect guys like Gene Simmons and David Bowie, who went out there wearing those amazing outfits. I couldn’t pull that off.

You guys have had an incredible year. What do you take away from all the fame and success?
Taggart: We have a group of friends who bring us back down to earth. They pretty much give us s**t constantly. [Laughs] We’re just the same old dudes. 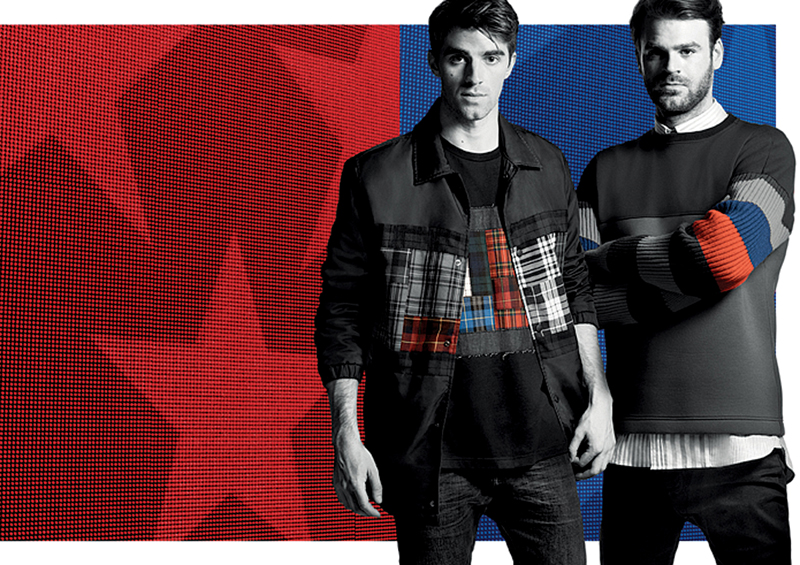