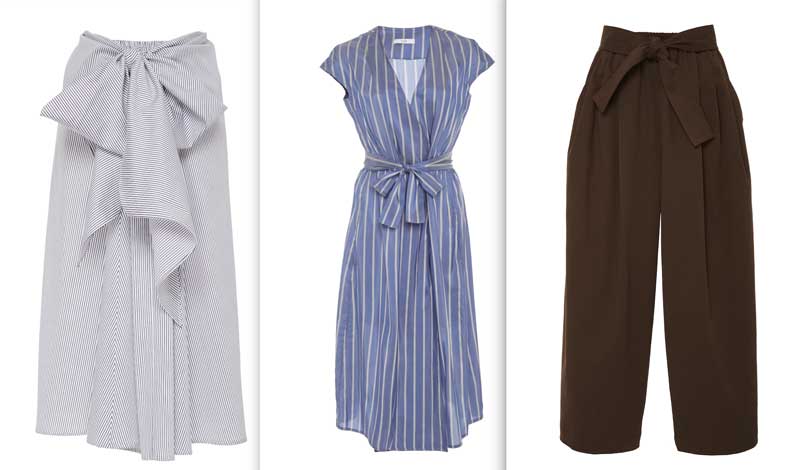 Tome designers Ryan Lobo and Ramon Martin tapped Moda Operandi for their first-ever collaboration. The capsule draws major inspo from Cuban artist Belkis Ayon, who’s known for her moody motifs. Her influence pops up everywhere, from the flowy wrap dresses to the sultry ruffles and the layers upon layers of earth tones. We joined Moda Operandi and the designers at the Soho Grand Hotel in NYC to learn more about the forthcoming capsule.

On “the Tome woman”…
Ryan Lobo: “We refuse to answer questions like, Who is your woman? At the end of the day, we speak to every woman. Someone told me their 17 year old daughter is obsessed with the clothes, but then my 70-year-old mother would love it too, and everyone in between. They’re not going to want the same thing, but they’re going to want to feel happy.”
Ramon: “If you can keep a woman at the forefront of what you’re doing, you will make things that are real and that are relevant. If you put a chair or a light fixture or something like that, then you’ll probably end up with something that looks like a light fixture. At least that’s what it is for us. It pushes us.”

On the Tome x Moda Operandi collection…
Ramon: “Our two influences this season are a Cuban artist that I first came across during a trip to Brazil last year. It’s high contrast, quite sensual with these fresh strikes of white through her work. It’s just very emotional.”
Ryan: “This is a real collaboration. We revisited the best hits of Tome. This is the first time that we’ve collaborated with another brand. No piece in the collection was not touched by all of us.”
Ramon: “At the core of it, we really want to connect with our customer and find out what she wants and what inspires her. So this was a real opportunity for us. It’s brought us closer to our customer. It’s helped us evolve as well.”

On their favorite pieces…
Ryan: “I love the black trench. We wanted to reinvent the trench, so we added a ruffle. It just adds some flourish and fun.”
Ramon: “The fabrics we developed here are men’s shirts or cottons that we have used season after season, but translat[ed] into silk, doing a soft gown that’s just as easy to wear if you have a beach holiday or a summer party. I also love the wrap tops; it’s something that we played with for Spring ’16.”

On breaking the rules…
Ramon: “Get rid of the dictatorships of fashion, get rid of the people who tell you your hemlines have to be a certain way or this has to be this way. Clothing is about self-power. It’s about having things that are easy, that you can play with, that you can create, and that’s where you feel empowered.”

On their style influences…
Ryan: “From the very beginning, we decided that we would take a female artist, or multiple artists, as the inspiration to the collection. The women that have inspired us are as diverse as Georgia O’Keefe and Dorothy Parker….Madonna, ad Donna Karan, and everyone in between. It just so happens that these women not only made or make the most incredible art, but they also really fabulous personal style. That kind of is in the clothes as well.”
Ramon: “There’s a Sade vibe, I don’t know if you picked up on that. She’s always on our board. Sometimes we’ve engaged some of these artists if they’re alive.”