Tilda Swinton Vamps Up In 'Only Lovers Left Alive' 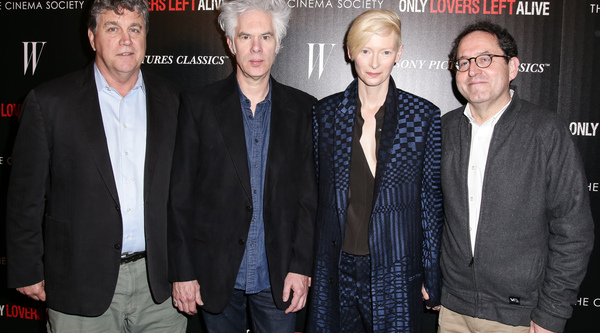 The film stars Tom Hiddleston and Swinton as vampiric versions of Adam and Eve, respectively. They’re both thousands of years old, emerge only during the night, and drink blood to stay alive. The duo were married a few centuries ago, but are now carrying on a long distance relationship, staying in touch via iPhone from their homes in Detroit and Tangiers. While the story line was certainly riveting, the cinematography and smaller details really drew you in. To wit: the vampires’ leather gloves worn in public to the decrepit mansion Adam inhabits. “I love the way in which vampires live outside of society,” said Swinton of the mythical creatures. More reasons Swinton finds vamps endearing: “The fact that they make their own rules, and that they never seem to run out of cash.” Not a bad way to live, right?

Following the film, which clocked in at just about two hours, attendees made their way to The Handy Liquor Bar, a chic SoHo nightlife spot that has yet to open to the public. Between sips of Qui Tequila cocktails, guests nibbled on apps from Chalk Point Kitchen, the adjoining restaurant. Just like the flick’s vampires, the stylish party-goers lingered at the party very, very late into the night.
DENA SILVER