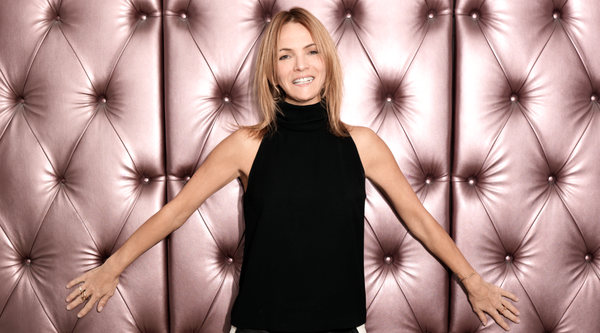 (NEW YORK) Prized for her discretion, on-demand makeup artist Tina Bech Lipman’s roster of private clients reads like the guest list at the Vanity Fair Oscar party. Without giving too much away, the great Dane dishes on her life in fashion and her talent for staying mum.
BY DENA SILVER

What were you doing before makeup?
When I first came to New York from Denmark my dream was to be a painter. It was the only thing I wanted to do. Then I met the man I ended up marrying [David Lipman], who was in the business of advertising. He suggested that I do makeup, since I could travel, and also have kids. Honestly, that was all he needed to tell me.

How did you get your foot in the door?
I had a really good way of mixing colors and a good sense of that, but doing actual makeup was completely new to me. I trained for three years, working out of small boutiques and training with the best makeup artists. I assisted everyone—Mary Greenwell, Moyra Mulholland, François Nars, Kevyn Aucoin—all those guys.

What was your first big job?
I had a lot of celebrities. I did Chevy Chase for the cover of New York, and Donald Trump for a TV appearance. I did Emma Thompson and Susan Sarandon. Then I worked with Sandra Bullock, Anna Nicole Smith, Elle Macpherson, and Liz Tilberis, who was a dear friend. I worked with her up until two weeks before she died.

How did you go about securing clients?
I became the makeup artist anyone could send out to the most awkward or strange job, because with a wink and smile, I could always get by. A lot of times I can’t talk about my clients, or even say their names, simply because these people are sitting front row or they’re in politics. One of the reasons they hire me is because I don’t ever talk about them.

Did you do a lot of magazine shoots?
There were a few years where I worked almost exclusively for Patrick Demarchelier and Raymond Meier, mostly for Harper’s Bazaar and W.

Did your ex-husband’s defunct agency, Lipman, ever give you work?
I tried to stay free of that whole thing. They did amazing work and beautiful stuff, and I was present a lot, but we very rarely worked together.

What’s your client list like now?
I think my career went from being very fashion-y in the beginning, to celebrities, to working with a steady group of clients, most of whom I’m not able to talk about. The people I work with now are mostly successful women who might need a little help sometimes. I’ve done Michael Bloomberg’s girlfriend [Diana Taylor], and I work a lot with Jennifer Fisher, the jewelry designer, and Andrea Lieberman, of A.L.C.

What’s your most iconic look?
It was in Harper’s Bazaar, and it was shot by Raymond Meier. It was a very taupe-y look, before anyone used taupe that much. Then I created a taupe look for one of the first covers I ever did for W. It was very taupe, but almost in a goth way.

Who are your pals in the beauty business?
I’ve gotten close to Moyra Mulholland, and Fulvia Farolfi I know really well. There’s also Ric Pipino, Didier Malige, and Sam McKnight. A lot of my friends are people I met when I was just starting out. More of the vintage names!

Would you ever want to write a book?
I’ve always wanted to do a picture book of women who stay true to themselves. The book wouldn’t be for the younger woman, it would be for someone 40-plus, to show that it’s not all over. It could be makeup, and how to do make up, but no writing.

Sounds chic. Would any of your clients be involved?
Jennifer Fisher told me, ‘Tina, if you do a book I want to be in it, naked on a skateboard.’

Jennifer Fisher Collaborated With CB2 on a...