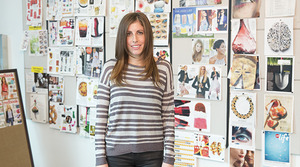 (NEW YORK) Ready for another installment of “The Assistant Files”? Of course you are! This week, The Daily ventured to the offices of Redbook, where Hannah Hickok has been assisting editor-in-chief Jill Herzig for over two years. Following a glossy-wide revamp last April that gave this women’s mag a stylish focus, Hickok ramped up her duties, landing an additional title of assistant editor. This new gig allowed Hickok to work on fashion features, all while maintaining Herzig’s tight schedule. Perhaps it was her short stint in PR that prepared her for this whirlwind gig…or maybe this Massachusetts native was made to multitask.
BY DENA SILVER

Tell us a little about yourself!
I grew up there in a small rural town in central Massachusetts and I graduated from Colby College, a small school in Maine. During college I was a government major, but I took every single writing and poetry class I could. Writing was always my secret passion. After I graduated I didn’t really know what I wanted to do, but I had a job during college as a peer writing tutor, so I enrolled in the Columbia Publishing Course. It was an amazing experience and the perfect segue into New York.

What followed after that?
I took a ton of interviews at books and magazines; I got a job at Travel + Leisure, which taught me that I love magazines.

Did you stay in magazines?
One of the editors at Travel + Leisure helped me get a job at a boutique travel PR agency where I was for a couple of years, but my heart was always with magazines. I continued to interview whenever I could and finally the Redbook job came through about two years ago.

Did your PR stint prepare you for this job?
It did allow for a much smoother transition. When I started, I knew the trick to doing 10 things at once and not freaking out.

What was your first meeting with Jill like?
We had a very natural conversation, and I could tell that she wasn’t trying to trip me up or put me on the spot. We were talking about magazines and editorial. The conversation just flowed and we had a good dynamic going. But I was definitely nervous!

What was your first impression of your soon-to-be boss?
That she was a put-together, friendly, polished woman who’s not about intimidating people. She’s about connecting with people, no matter your age, where you come from, or what you’re doing. She’s always very interested and really genuine with anyone she’s talking to.

How did those first few weeks go?
They were a whirlwind and really crazy. But when I was at Travel + Leisure, I had stepped in for the assistant to the editor-in-chief a few times, so I had an idea of how fast paced it was going to be. I knew what it was like to answer the phones and line up a schedule, all while having hundreds of questions coming at you at once. It really helped that Jill’s old assistant, Brittany Burke, was still here. She had been promoted, but she trained me and helped me out with the transition.

What is your rapport like with Jill?
There’s such a mind meld between us; I know what she needs and she knows what my tendencies are. The communication flows very easily at this point. There has never been a minute where I’ve been intimidated by her. She’s just a great boss and she really cares about her employees. She knows the names of everyone’s significant other and their kids. And when I’m sick, she checks in on me!

What are Jill’s lunchtime haunts?
For a while she was going to A Voce; she also likes Trattoria Dell’Arte, and Brasserie Cognac.

What about coffee?
She isn’t a big coffee drinker, but she does drink tea out of a mug her daughters made in art class. She usually makes the tea herself. But if she’s having a crazy day, she’ll send me out to pick up an espresso for her.

Do her daughters ever come to the office?
Yeah, her oldest daughter, Julia, went to the White House Holiday party and a fashion show with Jill. They come into the office and look at her shoe collection and always ask, ‘Mom, why are all your fun shoes at the office?’ But Jill really does shield them; they have a very down-to-earth upbringing. They’re not getting crazy exposure to the fashion world.

Do you bring Jill any reading materials in the morning?
No, she reads the paper at home. Occasionally if there’s something newsworthy, I’ll tweet it for her. If she doesn’t tweet about it, I’ll recommend that she does.

Are you Jill’s unofficial social media manager?
I always help her download apps on her phone and show her how to use them. That’s my favorite part of the job! I’ll occasionally tweet for her. But she’ll tell me what she wants to say; I’m not making it up.

She seems very independent!
She’s very self-sufficient. She knows that her assistant isn’t ever going to be just her assistant; they’re always going to be doing something else and juggling other editorial tasks. So she’s not demanding in a way that’s prohibitive to people like me, who are trying to take on more responsibility.

What does the assistant editor part of your gig entail?
I edit a lot of our fashion pages, and I do some front of book pages. It’s gotten to the point where I have so many editorial responsibilities that they almost outweigh the administrative ones. Since I’ve been Jill’s assistant for so long, that part is automatic and it doesn’t take as much energy anymore. I do have to put in extra hours during the weekend and before or after work because editorial is obviously my passion.

When you get to the office each day, do you tackle editorial or administrative work first?
I start with whatever’s the most urgent and time sensitive. I check my emails first and then Jill and I go over what she has to do that day. I send her into whatever meetings she has to be in, I corral other editors if she’s meeting with them, and sometimes I’m even in the meeting. Once I’ve got her squared away, that’s when I turn to my pages. I’ll often have to get up and leave my desk in the middle of a draft I’m working on. It’s a lot of running around; a lot of stopping and starting.

What are your favorite types of stories to work on?
I love all sorts of technical reporting: the kind of stories that provide useful news. I reported and wrote our swim feature in June, which involved meeting a lot of women who were trying on swimsuits, interviewing them, getting quotes from them, and finding out why a bathing suit works. I was really getting down to the nitty gritty, like how one waistband would work for one woman, but wouldn’t work for another.

Redbook got a massive makeover last year! What was that like?
The redesign was so much work; we had to completely rethink the concept and the mission of the magazine. But it brought our staff together on a whole different level because we put in crazy hours. We were just sitting around a table throwing ideas out. It was a little scary because we didn’t know what Redbook was going to turn into and how it was going to be received, but it was exciting to walk that plank together.

How did your position change after the redesign?
I feel so lucky that I came in before the redesign because writing about clothes comes naturally to me. During the talks I was able to raise my hand and say ‘I want to take this on, please, give me everything possible.’ There was so much work but they wanted to see how I would do, and I was able to run with it.

With this new fashion focus, will the September issue be the largest mag every year?
It was our biggest fashion issue and I think going forward it will keep getting bigger and bigger as we continue changing focus and gain more fashion advertisers. We’re still developing the themes for different issues, like we have a big beauty issue coming out this spring, so I think it will be an ever-changing thing.

Will each issue have a theme?
There won’t be a theme for every issue, but we’re always changing things up. Jill doesn’t like to have a formula for things because she finds that to be limiting, If someone has an idea, she’ll definitely listen. If it’s a great idea, she will find a way to incorporate it into the magazine.

Where do you see yourself in the future?
I would love to still be at Hearst. It’s a great company to work for, but I don’t know where I’ll be. Hopefully I’ll be an editor working on stories I love!