The Whitney's Biennial Previews The Next Generation 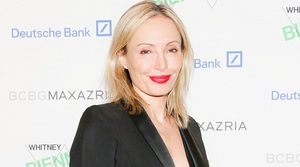 (NEW YORK) On Tuesday night, art lovers, designers and socials flocked to The Whitney Biennial’s opening reception. BCBGMAXAZRIA sponsored the elegant evening at The Whitney, where guests including Steve Martin, Peter Brant, David Schwimmer, and Kyle DeWoody, took in the exhibit. Designer and creative director of BCBGMAXAZRIA, Lubov Azria, teamed up with the director of The Whitney, Adam Weinberg, to pay homage to American art. The duo strutted down the red carpet in color coordinated ensembles; Azria donned a long grey textured dress, which she topped off with a black blazer and clutch, while Adam looked dapper wearing a structured black suit with a thin grey tie. Azria exclaimed that as soon as she met Weinberg that she “just fell in love; he has a strong message and point of view,” and as a result the brand has been a prominent sponsor of The Whitney Biennial since 2007.

Earlier in the week, BCBGMAXAZRIA hosted a dinner at The Gramercy Park Hotel Terrace for guests including Anna Sophia Robb, Kipton Cronkite, Euan Rellie, and Chelsea Leyland. The event plays a major role in achieving global recognition through its dedication to introducing new audiences to well-known and unknown artists by providing them a platform to showcase their work in the iconic Whitney Museum.  “The Whitney Biennial gives artists a chance to represent themselves and allows their career to instantly blow up,” Azria remarks. She explains that the debut of the artists work is like “the first film of an artist or the first showcase of a designer.” A true masterpiece of an eve!
SAMANTHA COHEN

The New Era Of BCBGMAXAZRIA Is Here